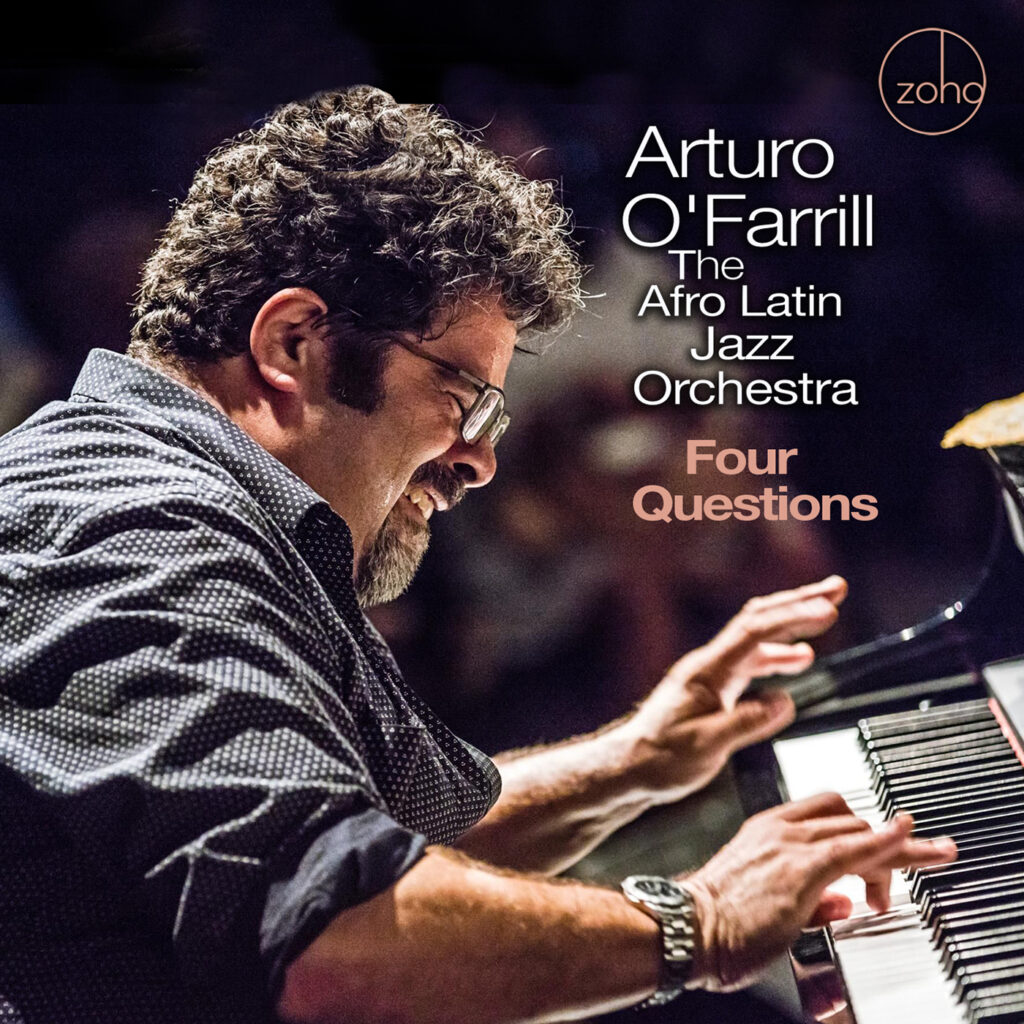 Premiered live-in-concert at The Apollo Theater on May 21, 2016, “Four Questions” will now be available for worldwide audiences to hear on Four Questions with the electrifying Afro Latin Jazz Orchestra joined by Dr. Cornel West as a guest soloist, conductor, and percussionist. O’Farrill’s commissioned piece for the Apollo Theater as part of his MacDowell residency took the shape of Dr. Cornel West’s speech at Town Hall (Seattle, WA: October 9, 2014) based on his book, Black Prophetic Fire. Four questions posed by the great African American civil rights activist and author W. E. B. Du Bois in his 1903 book, The Souls of Black Folk, are expounded upon by West while O’Farrill and his 18-piece orchestra usher in a jolt of inspiring fury.

“‘Four Questions’ is about bringing attention through Dr. West’s brilliance and vision, coupled with the subversive power of the Afro Latin Big Band, to the influence of revolutionary thought that demands we take stock of where we are as a country and demand better,” says Arturo O’Farrill, pianist/composer and Artistic Director of the Afro Latin Jazz Alliance. “We must pay tribute to the jazz greats like Coltrane, Holiday, Mingus, The Art Ensemble of Chicago, and carry on their legacy of bringing attention to the real issues of modern society through jazz music.”

A modern-day prophet, Dr. Cornel West joins the riveting Afro Latin Jazz Orchestra to hold our feet to the fire and demand that we deal with the social and political horrors of our day. Standing strong for what you believe in often threatens others in their complacency. To witness Dr. Cornel West in action is an awe-inspiring experience. He is widely renowned as a speaker of substantive truth within the intelligentsia community.

O’Farrill notes, “Watching Dr. West speak is one of the sublime musical moments of my life. His oratory has the weight of a John Coltrane solo. His rhythmic delivery has the tumbao of Mongo Santamaría. The humor with which he injects his very serious messages floats like Charlie Parker in flight and, oh, most sacred of all, when he gets deliberate, each word has the authenticity and Afrocentricity of Thelonious Monk’s right hand.”

More than ever the brilliance of Du Bois’ introspections, West’s interpretations and the pure jazz fire with which they are delivered are a salve for those who are hurt by the daily assault of those who use ideology to promote hatred and violence. Jazz fans and music lovers alike are in for a special treat upon hitting play on their audio devices when “Four Questions” is in the queue.

“Four Questions is the sixth production on which Arturo and I collaborated, over almost a decade,” says Kabir Sehgal (Executive Producer, Four Questions). “That this project is grounded in the philosophy of one great American writer, W.E.B. Du Bois, it’s fitting to cite another. The influential African American jazz critic and novelist Albert Murray believed that cultural diversity was a hallmark to America’s strength, and I know that Arturo believes this, too. Moreover, like Murray, Arturo believes that the powers that be should be called out for intolerance and bigotry. It’s been an honor to produce this project with Doug Davis and for Arturo, who I consider a dear mentor and friend. When he embarks upon a project, he bares his heart and soul. The world is a better place for Arturo sharing his profound artistry with all of us.”