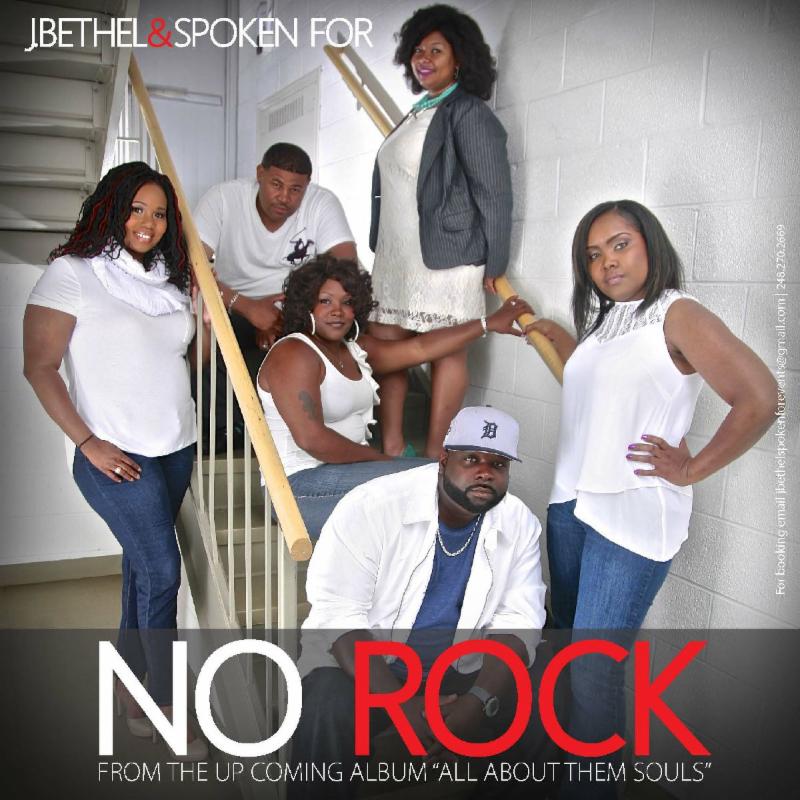 (Detroit, MI) – J. Bethel & Spoken For is back with another incredible song of praise entitled, ‘No Rock.” This new single has a reggae feel, mixed with a Gospel flare, that brings a message of determination to Praise God no matter what! Taken from their soon to be released EP entitled, “All About Them Souls” that is scheduled for release in the Summer of 2018.

J. Bethel has been surrounded by music his entire life. With a father as a songwriter, an uncle who played with Parliament Funkadelic, Jason was bitten by the music bug at an early age. Watching the legendary drummer Marvin McQuitty play week after week at his church only enticed the young Jason even more. Now an adult, that same amazement continues to capture the heart of Jason Bethel.

Backing him is the vocally-talented ensemble, Spoken For that was formed in 2013, the innovative and energetic group consists of singers Nikki Stephens, Cynthia Stansfield, LaToya Nakima Williams, Zshawntanique V. Starks and Phillip Pettigrew.

The Detroit-bred singer and songwriter first CD release was entitled, All In in 2014. This is a critically-acclaimed collection of original Gospel songs of which several singles were released including “You’re God” this groove-laden track shares the attributes of God that comes directly from the soul of the psalmist. “I Gotta Praise In Me” feat. Sunday Best winner Tosha Page Lockhart both of which made the Nielsen/BDS Gospel Singles Charts.

In 2017 he released another single entitled, “Spoken For” which is a song that will touch your heart, mind and spirit. From the melodic tones of the piano, strings and guitar, to the dynamic vocals acrobatics, “Spoken For” will teach you the power of Love and salvation through Jesus Christ.!!

Growing up in church as the son of a pastor, he was tapped as the church’s music director at the age of 12. A keyboardist and songwriter, he penned songs for the praise and worship team with all of the church’s musical repertoire coming from the pen of Jason and his father. As a college student, he attended Tiffin University where he assisted in forming the school’s first Gospel choir. As a vocal jazz and choral major and a member of “Up In The Air”, he was honored to open up for artists like Dee Dee Bridgewater, Jennifer Holliday and Take 6. As a musician and producer, he’s worked with artists like Gospel great Rance Allen and Sunday Best Winner Tasha Page-Lockhart and played behind Kierra “Kiki” Sheard. An ordained minister, Bethel is the Minister of Music at Word of Life Christian Center in Detroit, MI where his father and mother, Pastors Gregory & Doreen Bethel lead.