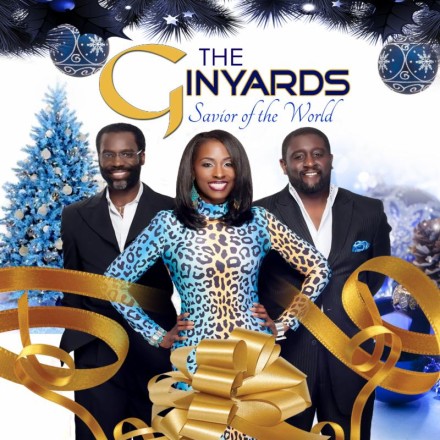 The Ginyards Christmas Single
“Savior of the World”

THE GINYARDS are three siblings that have been referred to as Detroit’s best kept secret. Their NEW single “Savoir of the World” is just what you needed to remind us of the birth of Christ for and the reason for the Christmas season. They began singing at their father’s church in Detroit, Michigan when they were very young. It wasn’t long before it became clear that this was their calling. What began years ago has blossomed into a God-ordained ministry.

THE GINYARDS have had many memorable engagements to their credit. They have shared the stage with such notable persons as the late Ron Winans, the late Bishop Walter Hawkins, Tramaine Hawkins, Rev. John P. Kee, Vickie Winans, the late Min. Thomas Whitfield and Commissioned. They have also performed on the Bobby Jones show. THE GINYARDS have done two radio and TV commercials. The first was an anti-drug, alcohol and violence spot recorded during the term of then Mayor Coleman A. Young, entitled “Let’s Not Take it Anymore!” The second spot was a McDonald’s commercial, entitled “Four After Four.”

In March, 1993, THE GINYARDS entered and won the “Sing His Praises” competition in Nashville, Tennessee. This contest was sponsored by Warner-Alliance and Tri-Unity, Inc. THE GINYARDS won first place and were awarded a prize of $21,000; giving $10,000 of the prize money to their church. The first place prize also included a recording contract with Warner-Alliance. However, due to the sudden death of one of the company’s officials, THE GINYARDS’ record deal fell through.

On June 1, 1998, God in His infinite wisdom saw fit to call their beloved father from labor to reward after over 40 years in ministry. Two days later, Willie, who had been preaching for two years, was immediately given the position his father held for so many years before him. It was very difficult for the group to adjust, and as a result, the “Yes, Lord” that was once a continual utterance had become a distant memory; no longer in the forefront of their minds; no longer in their hearts and no longer on their lips. Still reeling from the emotional blow of their father’s transition, THE GINYARDS experienced more setbacks and attacks. As a result, they sat silent for many years; not a song, not even a melody was birthed. The desire to sing was, in a simple word, gone. However, after several years of abandoning the call, God reminded them that no matter what, His will had to be done.

Today, even with a plethora of added responsibilities, THE GINYARDS are more determined than ever to do what God has called them to do. After years of hard work and struggling to learn life lessons, and amid laughter and tears, God’s guiding hand is directing them to the place He wants them to be. Armed with the experience needed to effectively minister, as well as to endure what may lie ahead, they realize why God subjected them to so much suffering. And on this long journey, He has established within each of them a testimony to be shared with people all over the world. THE GINYARDS credit their father, the late Pastor W. R. Ginyard, Sr., for being their inspiration and spiritual leader. They also credit their mother, Mrs. June Ginyard, for their musical training and for providing the firm discipline, undying love and good family values instilled in them at an early age.

An effective witness must have a story to tell…well, this is part of their story – there is more to come.