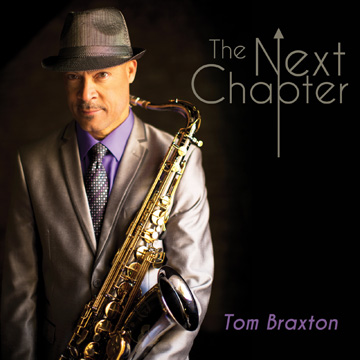 Dynamic…Energetic…Charismatic…Warm-hearted…These are just a few adjectives that have been used to describe saxophonist Tom Braxton, whose distinct, melodic sound has been thrilling audiences of all ages from coast to coast and abroad for nearly two decades. This versatile instrumentalist and gifted composer is a seasoned performer who has the amazing ability to “grab the heart-strings” of the audience within the first few minutes of his show; engage them with his exceptional skill, wit, and charm; and leave them astounded, clapping, and on their feet screaming for more!

After a long break from the studio, the time is finally here! The long-awaited new project from Tom Braxton is set to be released on the Pacific Coast Jazz label on July 8, 2014. This time around, Braxton has enlisted help from some of the biggest names in the industry to create his latest recording, The Next Chapter. The record features Grammy winners Bob James, Earl Klugh, and Ricky Lawson, as well as one of Smooth Jazz’s most beloved and talented guitarists, Peter White, who all lend their amazing talents to stellar duets with Tom’s lyrical saxophone. This new project is a great follow-up to Braxton’s earlier release, Endless Highway, which was ranked #1 on the Amazon Best Sellers List for MP3 Downloads in Smooth Jazz, and it was ranked #21 on the Billboard Top Contemporary Jazz Album Chart.

The Next Chapter presents Braxton at his best from up-tempo grooves to reflective ballads. When listening to the record, it’s easy to feel the love, joy, and positive energy that is inherent in the music. There is something here for all jazz fans! The new recording features Braxton wearing many hats as usual. Aside from his performances on soprano, alto, and tenor saxophones, he also adds flute and keyboards to many of the arrangements. In addition to serving as producer on the project, Braxton has written and arranged most of the material. However, he did have production assistance from “the drummer to the stars,” the late Ricky Lawson. “I have always admired Ricky, so when he approached me on the Smooth Jazz Cruise and offered to help me with my new project, I couldn’t believe it!! Before I knew it, I was in L.A., in his studio, working with him and some of the industry’s finest musicians,” says Braxton. “It was like a dream come true. I had no idea that a few short weeks after this session, we would lose such a talented and generous human being.” Braxton reflects, “After Ricky’s death, his engineer told me that Lawson’s last session in his studio was drum over-dubs on the track, ‘New Horizons.’ I will always treasure the time I spent with Ricky. His passion, energy, and skill positively impacted this project and lifted it to another level.”

The Next Chapter combines lyrical melodies with invigorating rhythms from a variety of genres including dance music, sambas, soul, and contemporary jazz. The title track, a collaboration between Braxton and pianist Jay Rowe, kicks off the CD with a “hooky melody” and a “killer glide to the groove.” Lawson’s energy is evident on “New Horizons” which features a fresh “house beat” that accentuates Braxton’s exciting tenor solo work. Tom and Bob James take it “south of the border” and have some fun on “Nuevo,” a bossa-tinged party for piano and tenor. Peter White joins Braxton for a beautiful rendition of Bread’s classic, “Make It With You.” White’s guitar and Tom’s soprano are a match made in heaven! Braxton’s lively tenor is featured on the Spinners favorite, “I’ll Be Around,” which showcases smooth background vocals from Grammy winner Arthur Dyer. Braxton has been on the road with Grammy winner Earl Klugh, and they are mesmerizing in the sophisticated but simplistic “Contemplation.” “Sunrise in Malawi,” inspired by a recent trip to Africa with Klugh, is an energizing song that will get your “juices flowing.” The legendary guitarist adds his signature sound to this early morning “dance.” The light and airy “Tuesday Morning” will have you singing all the way to work as you enjoy the playful dance between Tom’s sax and the acoustic guitar. Ricky Lawson interjected some “old school” into the project with the song “I Love Music,” made famous by the O’Jays. Lawson and Sean Dancy got the ball rolling and Braxton added his signature sax and horn arrangement to help get you up on your feet! “The icing on the cake for this tune was having my son, Ian, play baritone saxophone in the horn section,” Braxton explains. “Although it was his first time recording in the studio, he performed like a pro.” Finally, Braxton displays his arranging skills with the classic hymn, “It Is Well.” You’ve never heard it like this before.

Braxton toured extensively with bassist Wayman Tisdale for 17 years, also serving as Musical Director. He has been a featured performer and fan favorite on the Smooth Jazz Cruise since 2005. He has also garnered rave reviews overseas, performing as a headliner on the first Smooth Jazz Europe Festival in the Netherlands and the Nile Gold Jazz Safari in Uganda. He was also a featured performer on the Java Jazz Festival in Jakarta, Indonesia. Braxton has toured with Earl Klugh in South Africa, Malawi, Mozambique, and Japan, and he has also toured with Keiko Matsui in Russia, Eastern Europe, Malaysia, and Japan. Braxton has shared the stage with a wide array of great artists including Dave Koz, Brian Culbertson, Rick Braun, Peter White, Candy Dulfer, Bob James, Jeff Lorber, George Duke, Kirk Whalum, Jonathan Butler, Norman Brown, Aretha Franklin, Sheila E., Luther Vandross, and Philip Bailey. Braxton has graced the cover of Smooth Jazz News and Saxophone Journal. He has also been featured in media and publications such as JAZZIZ, CBS’s The Saturday Early Show, and Daystar Television Network.