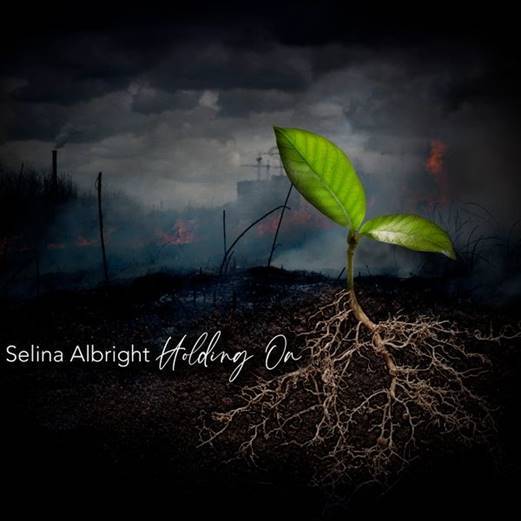 DALLAS (22 September 2020): Like so many Black people, R&B-jazz singer-songwriter Selina Albright is tired and her fatigue has nothing to do with becoming a mother for the first time earlier this year, which was the subject of her latest single to hit the charts, “Discovering.” No, Albright’s exhaustion and discouragement stems from “seeing videos of my brothers and sisters dying in cold blood, their deaths rooted in misplaced fear, their murderers allowed to live freely.” She cowrote and coproduced her forthcoming single, “Holding On,” to call out social injustice and the urgent need for reform. The single drops October 16 and will be promoted at urban adult contemporary and smooth jazz radio formats.

Musically, “Holding On” is an anthemic, multi-genre aural quilt sewn from soulful R&B heart, modern jazz progressions and tones, dramatic rock changes punctuated by drummer James “JRob” Roberson, and ethereal pop vocal harmonies. But it’s the song’s subject matter and lyrical content that is radically new and different for Albright, who has etched her place on the urban-jazz scene with intimate love songs and autobiographical confessions such as those contained on her 2017 debut album, “Conversations.” Her most piercing and provocative cry in “Holding On” is when she passionately repeats “Burn it all to the ground.”

“I frankly find it exhausting and infuriating to see ongoing evidence of oppression without much change. And because writing music is a therapeutic outlet for me, I couldn’t help putting pen to paper about my struggle to maintain hope for the freedom of my people – real freedom to pursue happiness, be our beautiful selves, and to live fully as is our inalienable right. Instead, our rights are seen as privileges by those who work to prevent the impending moment when Black people truly know our strength,” said Albright who wrote the song with her co-producer Chris “Big Dog Davis, David P. Stevens and Kayta Matsuno.

Although “Holding On” is a song that captures present life for Black Americans, its origins date back to a November 2017 recording session between Albright and guitarist Stevens. Stevens awoke with the chord progression in his head and played it for Albright when she arrived in the studio.

“The lyrics were originally written to bring hope and consolation to people with emotional health disorders because at the time, suicides were hitting close to home. Something in my spirit told me not to release the song yet. Since then, the United States has been exposed around the world for its social injustice, the roots and workings of which are so well hidden and indulged by a small fraction of our nation, but whose disadvantages are felt by multitudes,” said Albright, who plans to release an accompanying video for “Holding On.”

As usual, Albright found a way to incorporate her own experiences into the lyrics. After having a series of discussions with friends about their similar experiences of being Black in America, she revisited the song’s lyrics in order to make them more specific to Black people and the fight for social justice.

“I remember the first time my parents told me that because I’m Black, I’d have to work twice as hard as my non-Black peers to accomplish the same result. They also taught me how to dress and behave when certain people were present so that the police wouldn’t be called, and I wouldn’t die. Wouldn’t die! They said my smile and ‘proper’ dialect would be my protection. I’m glad I was warned because the same has been true even in my adulthood. There’s really nowhere to run from it,” said Albright, the daughter of multi-time GRAMMY nominated saxophonist Gerald Albright.

Ultimately, Albright would like to see her message in “Holding On” become obsolete, a dark and distant memory of the past before “we started over using our spirit of power, love and sound minds” to prevail over systematic racism.

“Black people are being herded around the country like cattle, our culture and excellence exploited, rather than kept sacred. We are being poisoned by processed scraps of food, and then given the lowest quality of healthcare. I see many of us losing steam. We can’t afford to do that. We must continue to find the strength to keep holding on until the whole world knows that at the very least, we matter.”