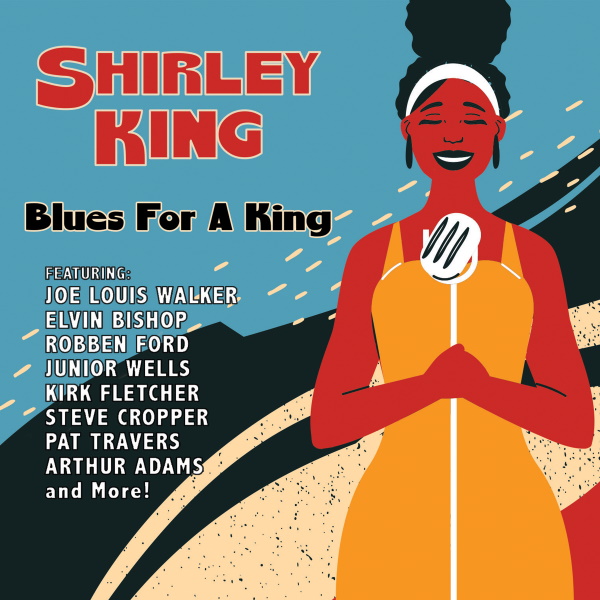 Los Angeles, CA – Being the blues-singing daughter of B.B. King has earned Shirley King the title “Daughter of the Blues,” but she is an outstanding singer and performer in her own right and capable of singing any kind of music that comes her way. Just witness her newest full-length album, Blues For A King, which crosses musical genres from blues to rock to soul and back again. Even next to such high wattage guests as Joe Louis Walker, Robben Ford, Junior Wells, Pat Travers & Elvin Bishop, King absolutely shines as she performs spectacular version of the blues classics “Gallows Pole” and “Hoodoo Blues Man” as well as the soul hit “Johnny Porter” (originally by The Temptations) plus two songs by British rock band Traffic, “Can’t Find My Way Home” and “Feelin’ Alright?.” The album closes with a powerful version of Etta James’s unforgettable “At Last,” which signals that, at long last, Shirley King is finally getting the attention and recognition she so richly deserves.

“I’m so thrilled that these great artists lent their amazing talents to my new album. I can’t thank them enough for believing in me. I’m so proud of this album and can’t wait for the world to hear it. I feel it’s my best work yet,” enthuses Shirley. Blues Hall of Fame guitarist Joe Louis Walker, who guests on two tracks on the new album, says, “I’ve had the honor of performing on two B.B. King albums. Now I have the distinct honor and pleasure of playing on his daughter’s album, Shirley King, who is also my dear friend. Keep the thrill goin’ on, Shirley….”

Blues For A King will be available on both CD and vinyl starting June 19 from Cleopatra Blues, a subsidiary of Cleopatra Records, Inc.

To purchase the album: https://orcd.co/shirley-king

BIO
Born and raised in Memphis, Shirley began singing in the church choir at age nine. When she was thirteen, she met another music legend – Etta James. Young Shirley was so impressed by Etta’s performance that she made Etta her musical role model. Ruth Brown and the late Mahalia Jackson also greatly influenced the fledgling singer. Shirley says, “I grew up around the stage watching my dad become famous, but I never imagined I’d become a blues singer too.” Ms. King came late to the blues, first trying it on in 1990. Within six months, she was a regular performer at famed Chicago blues club Kingston Mines. Two years later she saw the release of her first CD, “Jump Through My Keyhole.”

In 1999, Shirley released her highly acclaimed blues album, “Daughter of the Blues,” which featured her soulful, bluesy versions of classics like “Wang Dang Doodle,” “Sweet Home Chicago,” “Every Day I Have the Blues” and, fittingly, “The Thrill is Gone.” Once her father caught her act he lent his full support to Shirley’s efforts at carrying on the blues. She admits that having a legendary father helped open some doors for her, but it was her talent, charisma and high-energy stage presence, along with her big, beautiful singing voice, that put her on the musical map. From traditional blues to gospel to funky R&B to smooth soul, Shirley defies genre and her singing and stage antics never fails to excite her growing number of fans worldwide.

Shirley also believes in giving back. She has worked with kids as an artist-in-residence with the highly acclaimed Urban Gateways Arts in the Schools Program at Chicago Public Schools and continues to expose school children to the history blues has played in American culture. All in all, Shirley King continues to be the quintessential ambassador for the blues – and that’s something that would certainly make her daddy proud.