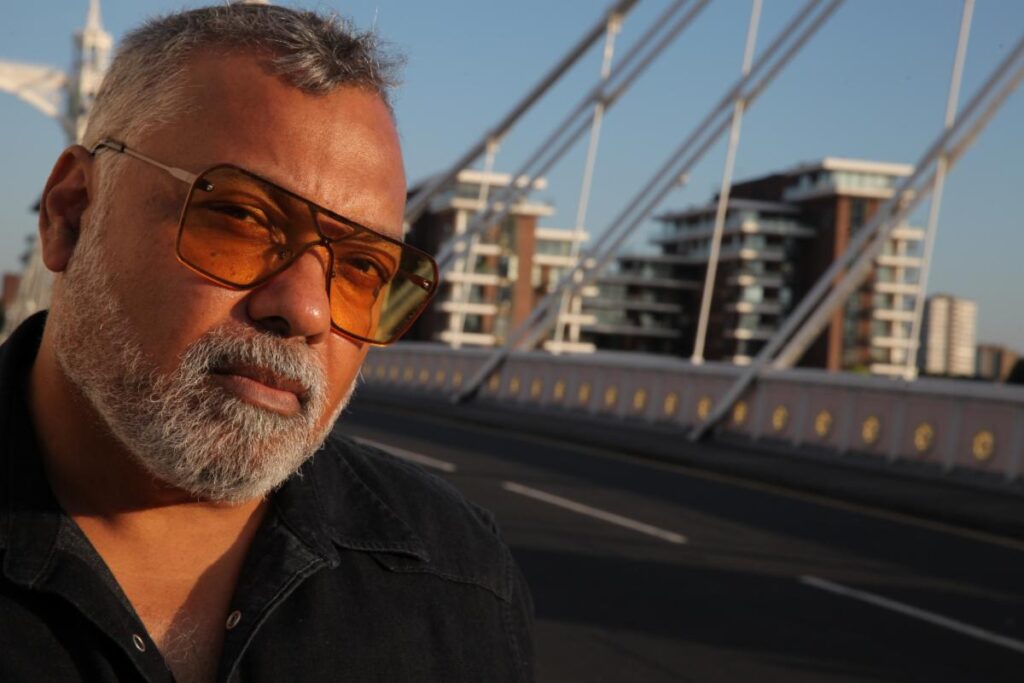 “When people relate to my songs, they are no longer mine,” explains ground-breaking UK groovemaster, vocalist and guitarist Jean-Paul “Bluey” Maunick. “If I hear Stevie’s ‘You Are The Sunshine Of My Life,’ I don’t have an image of Stevie Wonder singing this. I see the face of the girl I was kissing when I heard that record. The fantasy belongs to the listener.” Bluey has worked with Stevie as well as James Brown, Chaka Khan, Leon Ware, Phillip Bailey and countless others. This is the creative genius of Bluey, the pioneering acid-jazz architect who helped to lay down the blueprint for neo-soul and the creative force behind Incognito, the preeminent Funk/Jazz/Soul/Dance outfit in the world. A modern day troubadour, Bluey’s songs are evidence of his truth. The honesty, gritty soul and earthiness that lives between each dancing note and harmonic crevices, are the sustenance-filled ingredients that his devoted fans adore. The Mauritian born musician who was raised in the UK will release Tinted Sky, his heartfelt collection of original songs compositions in collaboration with Richard Bull (Incognito, Basia, Acoustic Alchemy, Maysa) on June 26, 2020. For those who are used to experiencing Bluey in a mega-band setting, it is a delight to hear this more intimate collection. Bluey confesses that the solo affair allows him to dig even deeper. “I get to escape the band,” he laughs. “When you live in a large family in one house, it’s great to pack up in the middle of the night and disappear where nobody knows your name, live off the land and to do things without the big picture in mind. Just do! That’s what this is!”

Now in his fourth decade of effortlessly churning out mind-blowing and chart-topping hits, the beat goes on with Tinted Sky. “There is no specific theme other than my voice, my guitar and the album’s sonic quality. It’s all fairly organic and Richard (Bull) and I don’t mess around…a track a day from conception to completed recording. Mixing was done the following day,” shares Bluey. As the chameleonic musician lets us into his heart on Tinted Sky, it is easy to hear his wide-ranging influences from Curtis Mayfield, Shuggie Otis and Boz Scaggs, to Marvin Gaye and Hall and Oates, among others. Tinted Sky opens with the rock-steady groove and ultra smooth “You Are The One.” Bluey’s soulful tenor makes a proclamation of love as he sings, “You are the one. There’s nothing that I would not do for you. You are the one. I only want to be with you.” They say all is fair in love, so Bluey also serves us the other side of romance on “Don’t Ask Me Why” singing, “Don’t ask me why when you know the reasons. Don’t ask me why you flipped the script and now I’m gone. Don’t ask me why, any fool would understand why I am gone.”

Tinted Sky’s first single is the hypnotic “Back Here Again,” a sublime showcase for Bluey’s tasty guitar wizardry and unrelenting flow. Love is in full bloom with a love that is real and true on “From the Break of Dawn.” Bluey confesses that this song displays the romantic side of his songwriting “kicking into overdrive.” Tinted Sky also features the winning “Had To Make You Mine.” Bluey lures you in with his seductive vocals and Richard Bull’s seriously funkified bass lines command your attention as he works overtime. The trippy “Make It Last Forever” will have you longing for an everlasting love despite the trials and tribulations, while “Nobody Knows” hedges its bet on the possibilities and uncertainty of where a love can lead. It isn’t hard to get swept up in the love frenzy of “Crazy ‘Bout You” and the album’s heavy hitting closer “Floating World” takes us to another plane. Bluey explains, “When we completely blow this planet, I guess space is the place! I won’t live to see it, but more of us will join folks already living in space. It’s SciFi!”

A poignant moment on Tinted Sky that is bound to stop you in your tracks is the haunting and thought-provoking “Unaware” which takes on the rise of senseless violence and knife crimes that have been gripping London in recent times. “As an observer I see it all being played out in front of my own eyes,” explains Bluey. “I am also writing from the core of understanding. I was stabbed when I was younger. I once took a knife in anger and rage to even a score… I did not follow through and my life took another turn. I’m making a statement, it’s my documentary and I am one of the lucky one’s that love changed!”

Indeed Bluey, Love Wins. Thank you for the ammunition.