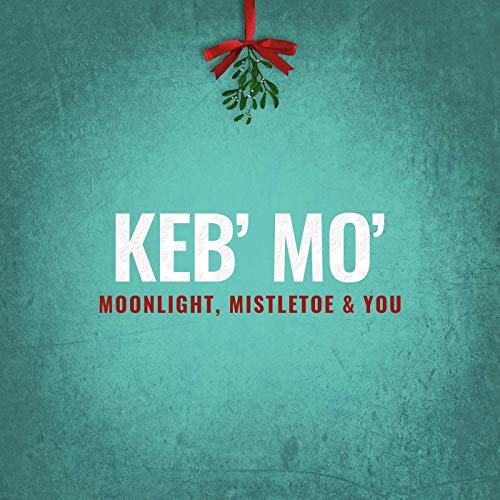 For Immediate Release – Following the release of Keb’ Mo’s deeply thought-provoking album, Oklahoma, that brought worldly issues to the forefront, the seasoned musician returns to lift spirits with a heartfelt feel-good holiday album, Moonlight, Mistletoe & You, slated for release on October 18, 2019 via Concord Records. After 25 years performing under the moniker “Keb’ Mo’,” the widely respected artist has finally gifted his eclectic global fanbase his first Christmas album, offering a melting pot of influences and original songs.

“After 25 years of performing without releasing a Christmas album, I felt now was as good a time as any to spread some love and compassion,” Keb’ Mo’ says. “There’s something about Christmas time that makes everyone’s hearts a little lighter and I wanted to contribute to the movement of spreading a little joy. I feel like I was able to accomplish that through the making of Moonlight, Mistletoe & You.”

Starting the album, Keb’ Mo’ puts his spin on a Christmas Classic, “Please Come Home for Christmas” offering a more uplifting optimistic disposition versus the Charles Brown original and the many covers that have followed it. While singing lyrics like “Oh what a Christmas to sing the blues, my baby’s gone, and I have no friends, to wish me greetings once again.” Keb’s warm version of the song offers a sense of hope.

Staying true to his Blues roots, Keb’ uses the building blocks of a proper Blues song with tracks “Santa Claus Santa Claus” and “Santa Claus Blues,” while bringing his own flair to the Mildred Bailey original and Billie Holiday covered classic, “I’ve Got My Love to Keep Me Warm.” Keb’ keeps a jazz-like sway throughout with the help of Melissa Manchester’s distinctive vocals, acting as his female counterpart.

All can relate to the humorous track, “Christmas Is Annoying,” helping ones inner Scrooge shine while pointing out the always-maddening events that come along with the Christmas season like maxing credit cards and having “no time to relax.”

Keb’ makes sure to also highlight the romance that soars throughout the holiday season with the title track “Moonlight, Mistletoe, And You” and closing track “One More Year With You,” both carrying a more “traditional” Christmas sound. While “Moonlight” brings on the saxophone solo, “One More Year With You” starts with jingle bells accompanied by piano and brass horns throughout, giving one all the Christmas feels and closing the album on a high note singing, “sign me up for one more year with you.”

Keb’ Mo’ will hit the road later this year in support of the release of Moonlight, Mistletoe & You. For a complete list of shows, please visit www.kebmo.com.

Moonlight, Mistletoe & You is available for pre-order here: https://found.ee/KebMo_MMY

1. Please Come Home for Christmas
2. Moonlight, Mistletoe, And You
3. Better Everyday
4. Santa Claus Santa Claus
5. Christmas is Annoying
6. Merry Merry Christmas
7. I’ve Got My Love to Keep Me Warm
8. Santa Claus Blues
9. When the Children Sing
10. One More Year With You