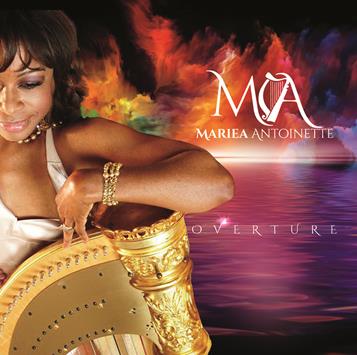 An “Overture” straight from the harp

Urban jazz harpist Mariea Antoinette provides a glimpse of her forthcoming album by dropping a euphoric single on January 29.

SAN DIEGO (23 January 2018): The dramatic opening immediately commands attention. Emerging from the lab with a preview of her upcoming summer album, urban jazz alchemist Mariea Antoinette returns on January 29 with the jubilant “Overture,” the new single featuring her mystical harp pouring forth as a bubbly protagonist. The divine stringed instrument is cast amidst an intriguing orchestral proscenium both ancient and modern constructed by a nine-piece string section, three-piece horn section and an empowering rhythm track crafted by Emmy winner and two-time Grammy-nominated producer Allan Phillips, who co-authored the composition with Antoinette.

“Overture” is the first original recording from Antoinette since her Phillips-produced “Straight from the Harp,” which was a Billboard Top 5 smooth jazz album in 2015. The new cut demonstrates that her mission to shatter preconceived limitations, stretch and abolish musical borders and boundaries, and expand the possibilities for the harp as a lead instrument in R&B, jazz, funk, soul and rock remains unwavering.

“My goal has been to present the unexpected: to make the harp the lead instrument backed by bass, drums and percussion. I am continuously stretching and pushing the boundaries of the harp, making a clear statement that it possesses a funky and powerful place in contemporary music. The harp is unexpectedly expressive in its delivery, a forceful lead voice and soloist in the midst of it all,” said the San Diego-based Antoinette.

In addition to vaulting into the elite ranks of the Billboard chart, Antoinette’s “Straight from the Harp” garnered an abundance of national airplay as well as critical plaudits. The mix of originals and R&B classics that comprise her sophomore outing was released in two versions. The spring 2015 release was enhanced in the fall the same year by two additional tracks and new cover art when it was issued as “Straight from the Harp: Special Edition.” Her debut album, “Sexy Paradise,” produced by the late Fattburger leader Carl Evans Jr., streeted in 2003.

A visually striking figure that also brings sensuality to the harp, Antoinette’s alluring artistry has landed her the opportunities to perform for President Barak Obama and First Lady Michelle Obama, back Ne-Yo at the BET Awards, and play Grammy parties for Vanity Fair magazine, Mary J. Blige and Jamie Foxx. In addition to her solo bookings, Antoinette is part of the powerhouse all-female jazz collective Jazz in Pink, with whom she has been performing at music festivals across the U.S. and abroad since 2007.