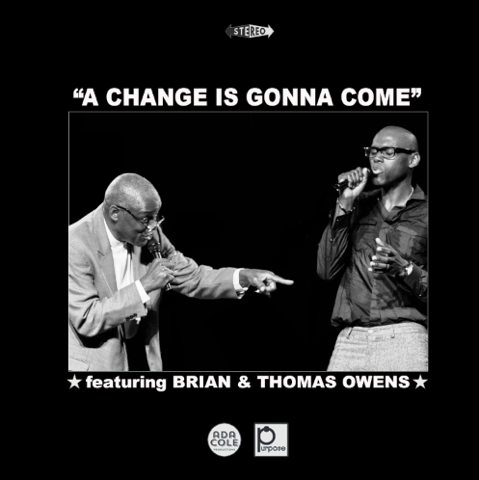 Proceeds from each download benefits nonprofit initiatives for young people in and beyond Ferguson, Missouri

NASHVILLE, TN (Oct. 23, 2017) – More than 11 million people have viewed a 2013 video of American soul music star Brian Owens and his father Thomas joining in an emotional duet rendition of the Sam Cooke classic “A Change Is Gonna Come,” with more than 10 million views on Facebook alone since October 7, 2017, and those numbers continue to grow!

Filmed at Shock City Studios in St. Louis, Missouri, the video honors the song’s message and Cooke’s legacy. Far more than that, it reflects a history of love, challenge and the triumph that binds these two remarkable men together.

“To have a song resonate with so many people is amazing,” Brian Owens says. “But the fact that it is a song and a video that includes my father is a blessing for which there are no words.”

Like Brian, Thomas Owens is a phenomenally gifted singer, though he chose not to pursue a music industry career. Instead, after returning from service in Vietnam and converting to Christianity, he supported his family for 40 years as a food scientist with the Nestlé Ralston company while also serving as an elder and preacher in his church.

The soul-stirring black and white video garnered more than 300,000 views when it initially posted on YouTube in 2013 and has received almost 2 million views in 2017, but the bigger story is that when the video was re-posted on Facebook earlier this month, the numbers exploded, reaching 10 million views and more than 350,000 shares in just a matter of days!

Due to the overwhelming popularity of the video, Owens is now offering the song as a single, with all proceeds from every purchase from BrianOwensSoul.com/Change4Life/download going to support nonprofit music and leadership initiatives in Owens’s hometown of Ferguson, Missouri and surrounding communities. These include L.I.F.E. Arts Inc. (Leadership, Innovation, Faith and Excellence), founded and led by Owens to provide development experiences and opportunities for urban youth pursuing the arts and to mentor and develop a new generation of leaders and innovators.

Owens’s other charitable initiatives include Sterling Bank for L.I.F.E. Community partnership and the All Star Clinics program. As manager of the In Unison program, he works with the St. Louis Symphony Orchestra to help connect young people with the city’s artistic institutions. He also partners with the Orchestra to sponsor Lunch and Learn events, which connect young participants with veteran musical artists.

ABOUT BRIAN OWENS:
Brian Owens first attracted worldwide attention as the lead singer with the U.S. Air Force band Sidewinder, whose videos drew more than 2.5 million hits on YouTube and led to numerous national television appearances, including Entertainment Tonight, FOX & Friends, The Ellen DeGeneres Show and more. He has also performed at the White House and the World Series. His music, which has been compared to legendary soul artists such as Marvin Gaye and Otis Redding, is full of messages that are hopeful, encouraging and thought-provoking, touching on subjects that range from social awareness to family life and faith. For more of the latest news and information, visit BrianOwensSoul.com.