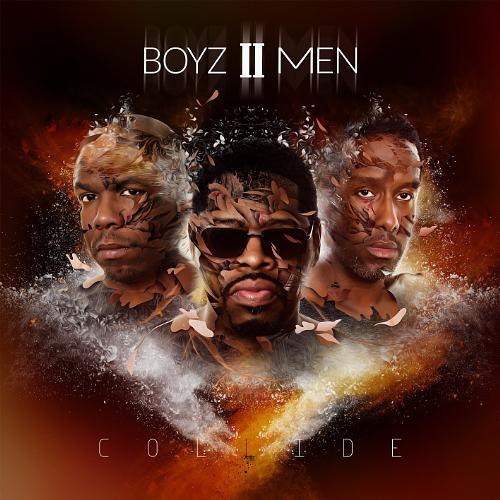 NEW YORK, Sept. 16, 2014 /PRNewswire/ — Boyz II Men, the bestselling R&B group of all time, is back with one of the most exciting albums of their 23-year career: Collide – which will be released October 21st on BMG- is, true to its title, a collision of sounds and styles, fusing rock, pop, and funk with the soulful R&B that first catapulted the 4-time Grammy Award winners to superstardom.

The iconic trio- comprised of Nate Morris, Shawn Stockman, and Wayna Morris- also holds the distinction of being the best-selling R&B group of all time, with an astounding 64 million albums sold worldwide.

Now comes Collide- an album that showcases a sound as big and bright as the group’s celebrated career. “Collide highlights a broader side of our creativity, going further into doing what feels right for us at this moment in our lives,” says Shawn Stockman. “And the product of that is an album with the type of sound that works in any era with big drums and dramatic, lush piano. It’s expansive and it grooves.”

As a first taste of the album, “Better Half” and “Diamond Eyes” debuted on ABC’s hit romance reality series, “The Bachelorette,” in June, with lyric videos for each premiering shortly thereafter. In the next five weeks leading up to Collide’s October 21st release date, Boyz II Men will unveil a new track from the upcoming album exclusively each Monday. First is “Losing Sleep,” which impacts at Urban AC today and premiered yesterday Monday, September 15th, 2014 on Billboard.com

For information on tour dates and everything Boyz II Men, head to: www.BoyzIIMen.com and follow them on twitter @BoyzIIMen. Fans can also pre-order Collide and receive “Better Half,” “Diamond Eyes,” and “Losing Sleep” instantly, by going to http://smarturl.it/CollideiTunes

ABOUT BOYZ II MEN
For over two decades Boyz II Men have given fans a rich catalogue of hits and number one albums that have withstood the test of time. Boyz II Men holds the distinction of being the best-selling R&B group of all time, with over 60 million albums sold. Although the four-time Grammy Award–winning group consisting of Shawn Stockman, Wanya Morris, and Nate Morris continues to tour around the world, they currently have a residency at the Mirage Resort and Casino in Las Vegas. Signed to BMG, they will be releasing an all-new album on September 30, 2014. For information on tour dates and everything Boyz II Men, head to: www.BoyzIIMen.com