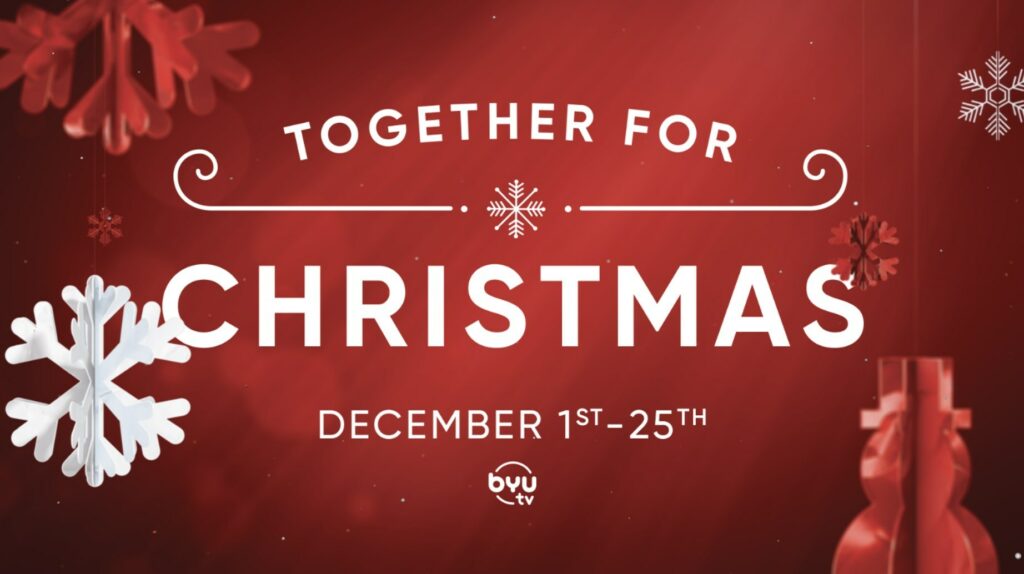 BYUtv Brings Everyone “Together for Christmas” With John Legend, The Tabernacle Choir at Temple Square With Kristin Chenoweth, Will Forte, “Christmas Jars,” “The Nutcracker” and More

“We could not be more pleased with the caliber of talent and artistry assembled for our holiday offerings this season,” said Michael Dunn, managing director of BYUtv. “From the incomparable John Legend and hilarious Will Forte to the spectacular combination of Kristin Chenoweth and The Tabernacle Choir to our valued association with Ballet West and our wonderful production partners across North America, we have created a collection of joy through music, dance, comedy and drama that will bring families and communities together this Christmas.”

Sunday, Dec. 1 at 7 p.m. ET: “Christmas Under the Stars,” starring Emmy, Grammy, Oscar and Tony award-winning singer and songwriter John Legend, will invite the excitement of Christmas in a magical evening of upbeat tunes and special memories. An annual BYUtv holiday tradition, “Christmas Under the Stars” is performed live in front of a large audience of fans and also incorporates intimate, cinematic musical moments. This exclusive special, produced by BYUtv in partnership with Kaleidoscope Pictures, will feature beloved classics like “My Favorite Things,” “Silver Bells,” “Merry Christmas Baby,” and “Have Yourself a Merry Little Christmas,” as well as some of John Legend’s original songs, including “All of Me.” Past performers have included Train, The Band Perry, Gladys Knight, Smokey Robinson, Patti LaBelle, Yolanda Adams, Amy Grant, Michael W. Smith and Five for Fighting.

Sunday, Dec. 1 at 8 p.m. ET: BYUtv will present the television premiere of its original movie adaptation of “Christmas Jars,” which was presented in more than 800 theaters across the country in a special Fathom Event on Nov. 4. The number six film in the nation, it had the highest per screen average of any of the top 10. Based on the New York Times bestseller by Jason F. Wright, “Christmas Jars” tells the story of aspiring reporter Hope Jensen (Jeni Ross), who uncovers the remarkable secret behind a holiday phenomenon: glass jars filled with coins and bills anonymously left for people in need. After experiencing a personal tragedy, Hope is unexpectedly gifted a jar. Realizing the story could be her big break, she goes undercover to learn more about the origin of the jars but ultimately finds much more in the lives of the people she meets. Will she lose the love and acceptance they’ve shown her when the truth of her intentions is revealed? The beloved novel, which has sold over a million copies, created a new holiday tradition that has changed the lives of people all over the country. “Christmas Jars” is a reminder that kindness truly is contagious. “Christmas Jars” was produced by Muse Entertainment and BYUtv.

Sunday, Dec. 1 at 9:30 p.m. ET: “Random Acts” is the unscripted hidden-camera reality show in its 5th season that highlights the altruistic nature of human beings by featuring real people who are the recipients of random acts of kindness. This special episode, titled “Jars of Joy,” introduces Emily, who is a passionate elementary school teacher. In the spirit of Jason F. Wright’s book “Christmas Jars,” her entire school comes together to give her a mega Christmas surprise.

Sunday, Dec. 8 at 6 p.m. ET: This exclusive presentation of Ballet West’s “The Nutcracker” commemorates the 75th anniversary of Willam Christensen staging the first full-length production of the ballet in America. Featuring interviews and insights from members of the cast and creative team, as well as performances in some of Utah’s most stunning locations, this unique presentation gives viewers an immersive experience with the nation’s longest running production of “The Nutcracker.” A full 90-minute version of the performance will also air.

Monday, Dec. 9 at 7 p.m. ET: The hilarious, interactive musical improv series “Show Offs” gives its cast, along with a special celebrity guest, the chance to “show off” by performing a spontaneous improvised play or musical, prompted by random ideas from the studio audience and accompanied by a live band. Join the talented “Show Offs” crew and Emmy-nominated Will Forte (“Saturday Night Live,” “The Last Man on Earth”) as they improv their way through “Mistletoe Miracle” in the style of Golden Age Christmas musicals.

Monday, Dec. 9 at 8 p.m. ET: During this milestone 10th season, the fan-favorite sketch comedy show “Studio C” celebrates the holidays with a special Christmas-themed episode in which the cast performs original sketches parodying Christmas classics and situations, including: excess heart growth forces the Grinch on a diet, all of the other reindeer bring in legal to discuss new terms and conditions for the famed Christmas carol “Rudolph the Red-Nosed Reindeer,” Mary Bailey deals with the consequences of George’s romantic action, a safety inspector gets into a fiery situation while visiting the elementary school’s Christmas party, and much more.

Wednesday, Dec. 11 at 8:30 p.m. ET: “Making Good” is an unscripted series chronicling one man’s quest to serve. Host Kirby Heyborne (“The Three Stooges”) loves helping people and eagerly volunteers for organizations regardless of the circumstances, his background or his experience. In “Prison Christmas,” Heyborne brings Christmas cheer to the Utah State Prison by teaching inmates a special Christmas song. There he meets volunteer Dave Aguirre, who runs a music program for the inmates.

Thursday, Dec. 19 at 7 p.m. ET: The 16th annual “Christmas with The Tabernacle Choir” holiday special, produced by BYUtv, features The Tabernacle Choir and Orchestra at Temple Square with Emmy and Tony award-winning actress and singer Kristin Chenoweth. A 60-minute version of the program will premiere on PBS on Monday, Dec. 16 at 9 p.m. ET (check local listings), after which the 90-minute version will air on BYUtv on Dec. 19. Chenoweth joins a 600-person-strong cast composed of The Tabernacle Choir at Temple Square, Orchestra at Temple Square, Bells on Temple Square and over 100 dancers for a night of Christmas celebration through music, dance and storytelling. With a special program that puts Chenoweth’s characteristic charm, style, faith and artistic prowess on display with the artistry of the Choir and Orchestra, viewers will enjoy a mix of classic Christmas carols and festive hits from across a number of genres: Broadway, pop, country, classical and Christian/gospel.

Throughout the month of December, BYUtv will also broadcast “A Very Corgi Christmas,” “A Celtic Family Christmas” and a two-part “Hetty Feather” holiday adventure, in addition to re-airing some of its popular Christmas programming from recent years, including “Christmas with The Tabernacle Choir featuring Sutton Foster and Hugh Bonneville”; “Christmas Under the Stars” concerts starring Train, The Band Perry, Gladys Knight and Friends, Amy Grant and Michael W. Smith with Jordan Smith, Five for Fighting, Vocal Point, and Gentri with Lexi Walker; past “Studio C,” “Random Acts,” “Just Like Mom and Dad” and “Heartland” Christmas-themed episodes; holiday movies “Shoelaces for Christmas,” “Winter Thaw,” “Instrument of War,” “Christmas Angel,” “Christmas Snow,” “The Family Holiday,” “A Christmas Village,” “Silent Night” and “Christmas Oranges”; and more. New and past programming will be repeated throughout the holiday season.

For a complete listing of BYUtv’s programming and to view full episodes, visit www.byutv.org. Press access to video, photo and other assets is available at www.byutv.org/pressinfo.