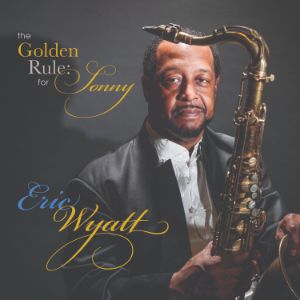 Through his six recordings as a bandleader, tenor talent Eric Wyatt has basically been performing unspoken tributes to Sonny Rollins. Wyatt calls Rollins his actual/musical godfather and has a way of injecting his passion for bebop and affection for geniuses like Rollins, Charlie Parker, and Pharaoh Sanders, into virtually every note he plays. Wyatt’s latest, The Golden Rule: for Sonny, is his inimitable way of paying tribute to those strong boppers of the past, joined by talents that have been contributing valiantly to the vibrancy of today’s jazz scene—guitarist Russell Malone, pianist Benito Gonzalez, trombonist Clifton Anderson, tenor JD Allen, and emerging youth like Giveton Gelin on trumpet and pianist Sullivan Fortner. Together, the posse exudes both class and bold promise as well as dashes of melodic invention. It is in this alchemy—blending experience with youth, merging tradition with progress—that Wyatt does his greatest service to jazz.

From the opening notes of the opening title track, Wyatt sets out to make a statement. His driving tenor is confident and beautiful, with just enough boogie to put a smile on your face. His improvisation surrounding the Bacharach chestnut “What the World Needs Now” is charming, familiar, and challenging all at once. Elsewhere, the splashy “Don’t Stop the Carnival” is fizzy and fresh, pivoting on Anderson’s sweet trombone. “Best Wishes” lets Fortner loose with the kind of up-tempo hard bop that an ambitious young talent can tackle. The recording closes with the Rollins’-esque “The Bridge,” featuring extended work from Wyatt, with a little room leftover for Fortner. It’s a blast and a great way to fade this session out.

Wyatt has said that he will never forget the impact Rollins—who often played with Wyatt’s father—had on him growing up. Here, on The Golden Rule: for Sonny, he proves he is a man of his word. Wyatt’s Whaling City Sound recording is a tenor-driven tour de force that you won’t soon forget.