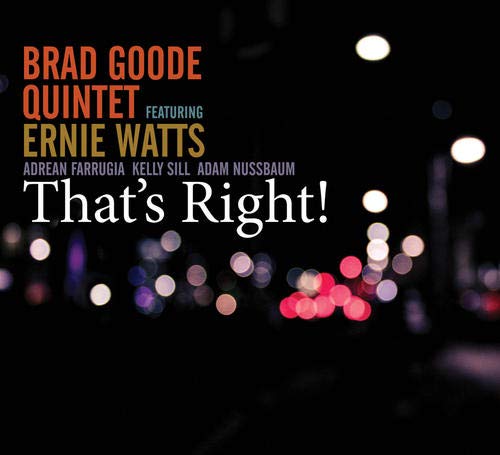 RICHMOND, CALIF. (PRWEB) SEPTEMBER 17, 2018 – “That’s Right!,” the recording debut of trumpeter Brad Goode’s quintet featuring tenor titan Ernie Watts, documents the virtuosity and versatility of one of the tightest working bands on the contemporary jazz scene. Set for October 19 release by Origin Records, the album is a powerful showcase for Goode’s ideal quintet as well as the soloing chops and writing skills of each of its members.

When Ernie and I do this together, people kind of freak out. So this album is a way to get that across to people who haven’t seen it live yet–that it’s gonna be exciting.

Watts and Goode first shared the front line in a concert at the University of Colorado in Boulder, where the trumpeter is an associate professor of jazz studies, in the early 2010s. “It was just one of those things,” Goode recalls. “We played together for a little while, and then we looked at each other and said, ‘Hey, you know what? This is good!’ There’s something that happens when the two of us start playing, and we’ve been making efforts to do what we can together ever since.”

Also featured on the new CD are Canadian pianist Adrean Farrugia and Windy City veteran bassist Kelly Sill, both of whom have been playing with Goode since 2005. The unit’s newest member, drummer Adam Nussbaum, joined in 2017. “I tell my students this: If you want to make the biggest change to the sound of your group, change the drummer,” says Goode.

“That’s Right!” contains three originals by Goode, one by each of the quintet’s other members, and the standards “Blues in the Night” and “I Want to Talk About You.” The final track, “Jug Ain’t Gone,” is a tribute to Gene “Jug” Ammons by the late Chicago jazz giant Von Freeman, Jug’s high school classmate and one of Goode’s mentors. It’s a hard-swinging blues that’s become something of a theme song for Goode. “Von and I used to play it at every gig but he only recorded it once,” he explains. “I run a jam session with students every Monday night, and I make that the closing tune. It’s just my way of keeping Von’s tradition of the jam session alive—and keeping Von’s memory alive.”

Born in 1963 in Chicago, Brad Goode took up the violin at age four, switched to guitar at eight and trumpet at 10. At 15, having moved to East Lansing, Michigan, he began learning the bass. Even when he decided to pursue music as a career, he couldn’t settle on one instrument: He earned his B.M. in classical trumpet at the University of Kentucky, and an M.M. in classical bass at Chicago’s DePaul University. 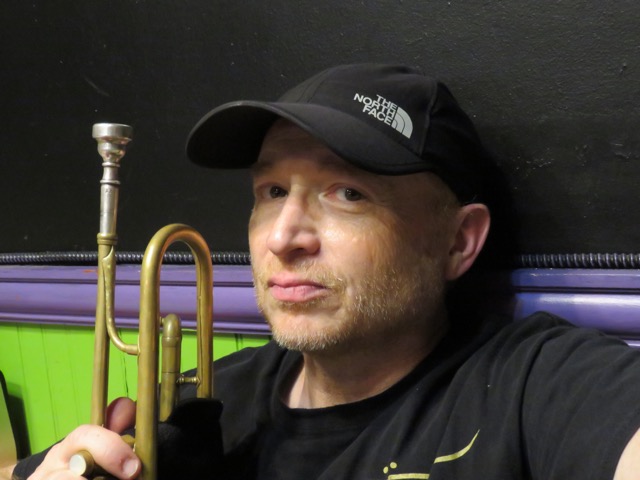 Goode’s early career was a period of extended apprenticeship, as he performed with the bands of jazz legends Von Freeman, Eddie Harris, Ira Sullivan, Jack DeJohnette, and Curtis Fuller. He led the house band at the Green Mill in Chicago from 1986 until 1997, when he left Chicago to pursue college teaching. Since then, his musical career has been expansive. He works often in the areas of world music, experimental harmony, and fusion. He is in high demand as a lead trumpeter, traveling widely to perform and record with big bands and orchestras, and is recognized as a master teacher of brass technique. He currently tours as the featured soloist with West African drummer Paa Kow’s Afro Fusion Orchestra.

In 1997, Goode joined the faculty at the University of Cincinnati College Conservatory of Music. In 2004 he accepted a position in Boulder, Colorado, and the following year formed a new working band with Kelly Sill, whom he’d known since the mid-1980s. They were joined by pianist Adrean Farrugia, whom Goode had met at a jam session and drummer Anthony Lee, one of his Cincinnati students who lived in New York.

The quartet stayed together for a decade, becoming a quintet with the addition of Watts in 2015. Lee’s 2017 departure brought in Nussbaum on drums. Goode flew the band in to perform at the Jazz Education Network (JEN) conference in Dallas in January 2018. “I had them all there, and I thought we should do a recording,” he says. “After the concert we spent two days at a studio in Dallas.”

While “That’s Right!” is his 18th album as a leader, Goode doesn’t see it that way. “I think of this as a debut album by a new band,” he says. “I feel this is a pretty special act. When Ernie and I do this together, people kind of freak out. So this album is a way to get that across to people who haven’t seen it live yet—that it’s gonna be exciting.” The quintet plans a series of dates in Spring and Summer 2019.