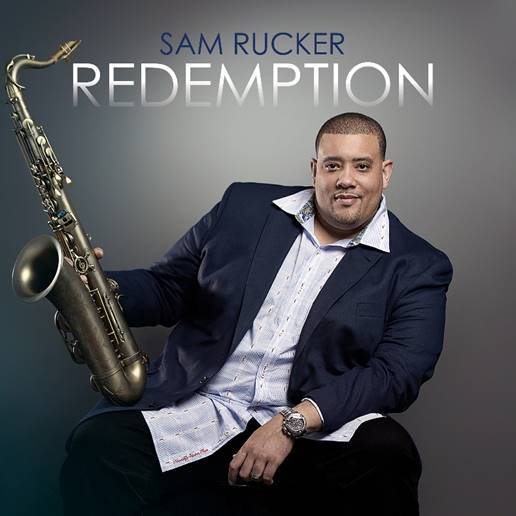 His steadfast message of “True Love” heads to radio as a single, preceding the August 24 release of his inspired third album.

WILLIAMSBURG (2 July 2018): One of the first songs that urban-jazz saxophonist Sam Rucker recorded for his third album, “Redemption,” was the soothing “Overcomer,” on which he emotes intimately on soprano sax during an uplifting exchange with a guitar duo comprised of his nephew, Justin Taylor, and John Calisto. Tragically, both guitarists passed away unexpectedly three days apart and the tune Rucker wrote to comfort and inspire others became his own healing grace. It is a focal point of the rousing eleven-track set penned and produced by Rucker that drops August 24 from Favor Productions.

Rucker’s life and his musical journey have evolved in recent years, growing from a gritty hip hop producer into a soul-baring R&B-contemporary jazz instrumentalist, yet his faith has never wavered. He is on a mission as an empowering evangelic emissary, using his tenor, alto and soprano sax on “Redemption” to deliver heartening orations that commiserate and console as much as persevere and conquer. His writing, production and sax play reflect a more refined, mature and sophisticated auteur who retained just enough of the raw urban grit from his edgy past to ensure that his recordings are genuine. Despite enduring pain, struggle and suffering, Rucker never loses sight of the Divine hand orchestrating it all – the victories and the losses – purposely placing his focus on the abundance of blessings and the love that cushions his every fall.

“‘Redemption’ is a feel-good album designed to touch the inner soul, to encourage and inspire the listener. It is about perseverance, keeping the faith, overcoming some of the worst that life has to offer and coming out better on the other side. Redemption of everything that was lost: the naysayers and doubters, the narrowly missed opportunities, the emotional scars and the sore spiritual muscles from years of exercised faith. Staying steadfast and seeing the gracious hand of God redeem all and make our former days greater than the latter. It’s also about making someone nod their head to the beat when they feel like hanging it during a tough time,” said Rucker.

“First and foremost, the song is about the fact that despite all the mistakes I’ve made and how undeserving I am, God still loves me enough to redeem me and bless me with as much as he has. For the listener, ‘True Love’ could be about life with a special someone. For me, it is really about the love of God, the only true love that holds no records of wrongs and never fails. If you look at your life, you’ll see evidence of His love in what He has done for you. But, when you really get it and realize that it’s Him and really receive His love, then there is a change in you that people will see. Hence the song’s lyrics.”

The Williamsburg, Virginia native debuted in 2011 with “Heat from the Heavens,” introducing his formula of hip hop beats, improv jazz and stirring inspirational messages. Three years later, “Tell You Something,” upped the ante by offering collaborations with urban stalwarts Norman Connors, Bobby Lyle, Tom Browne and Alyson Williams, boosting Rucker’s appeal at radio. His eyes averted the camera on the first album cover and were hidden behind dark glasses on the second. “Redemption” depicts a happier, lighter Rucker looking directly into the camera, eager to face and embrace what lays ahead of him with gratitude.

“When I released the last album (“Tell You Something”), it was a difficult time for me personally,” admitted Rucker. “In the last five years, my life has done a complete 180. With the release of ‘Redemption,’ I feel spiritually, physically, emotionally and materially redeemed. On this album, there are no covers, no guest producers and no big-time superstar performers. Just pure, raw and real me and those closest to me.”