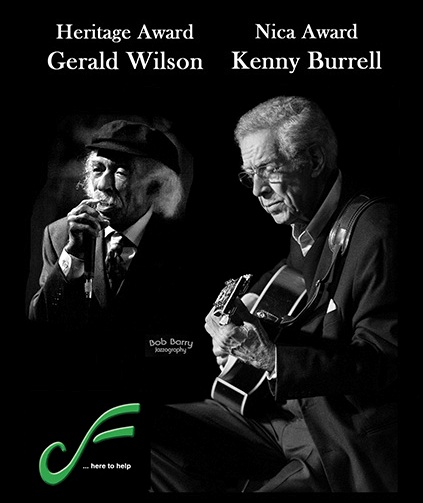 California Jazz Foundation Honors Educators And Jazz Icons Kenny Burrell And Gerald Wilson At Annual Give The Band A Hand Gala On April 8, 2017

LOS ANGELES, Feb. 16, 2017 /PRNewswire/ — California Jazz Foundation (CJF) will host its fifth annual Give the Band a Hand benefit dinner, concert and honors presentation on April 8, 2017. CJF founder and President, Edythe Bronston, had previously announced that guitarist Kenny Burrell is the recipient of the 2017 Nica Lifetime Achievement Award and the late Gerald Wilson, trumpeter, composer, arranger and bandleader, is the recipient of the CJF Heritage Award.

Performers taking the stage to pay tribute to Burrell and Wilson are guitarists Russell Malone, Paul Jackson, Jr. and Anthony Wilson and pianist Tamir Hendelman. The evening’s musical program, will conclude with The Los Angeles Jazz Orchestra Unlimited, directed by Trumpeter Dr. Bobby Rodriguez. Malone will serve double duty as master of ceremonies. More performers to be announced closer to the event.

Additionally, guests will enjoy the music of the LA City College Jazz Ensemble during the cocktail hour and dinner.

The Fifth Annual Give the Band a Hand Gala begins at 6 p.m. on April 8 at the L.A. Hotel Downtown, located at 333 South Figueroa Street in Los Angeles. Tickets are $250 per person and can be purchased online at www.californiajazzfoundation.org.

“Both Honorees are noted for their lifelong mentoring of students and their impact on straight-ahead jazz and both are considered a standard by which many of today’s musicians are judged,” said Bronston. “Kenny and Gerald will be honored by an assemblage of stellar musicians whose lives they have touched.”

Kenny Burrell is a National Endowment of the Arts Jazz Master, heralded guitarist, composer, and current Director of Jazz Studies at the UCLA Herb Alpert School of Music. The Nica will be awarded in recognition of his lifetime of contributions to jazz and to the myriad students who have benefited from his mentoring.

The Heritage Award is given posthumously to recognize significant contributions to jazz. This year it will honor the memory of Gerald Wilson — arranger, big band leader, composer, and educator. Wilson’s son, Anthony, will accept the award on behalf of the family.

Tickets for the Saturday, April 8 gala are priced at a tax-deductible $250 per person. There are also sponsorship opportunities available. Net proceeds from the event will benefit the California Jazz Foundation. To purchase tickets or to become a sponsor, the CJF can be accessed via www.californiajazzfoundation.org/, by email at info@californiajazzfoundation.org or by telephone at (818) 261-0057. All tickets will be held at the door.

About The California Jazz Foundation
The California Jazz Foundation (CJF) is a nonprofit 501(c)(3) corporation, a membership organization created to aid and assist California jazz musicians in financial or medical crisis. CJF is part of the Entertainment Assistance Cooperative (EAC), an organization composed of entertainment charities’ social workers who regularly meet and share information so that applicants only need to fill out one, rather than many, applications.

Established in 2006, the Foundation was formed to fulfill an unmet critical need to help these talented artists who have given us so much pleasure over the years – often with so little reward. The California Jazz Foundation is committed to providing access to quality social and economic services for all eligible applicants. CJF does so through a team of caring, knowledgeable professionals in collaboration with community partners.