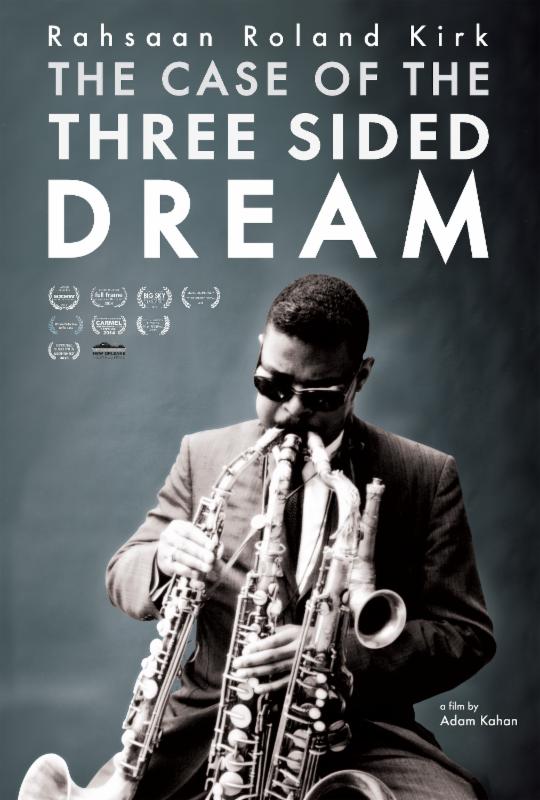 The Life of Legendary Saxophonist Rahsaan Roland Kirk Topic of New Documentary, The Case of the Three Sided Dream

Streaming and Download on Vimeo On Demand May 1, Available on iTunes on May 31 and Coming to DVD This Fall

Rahsaan Roland Kirk (1935-1977) was a one of a kind musician, personality and satirist who despite being blind and becoming paralyzed – did not relent. He was more than a blind musician who could play three horns at once. Beyond the ability to play multiple melodies at the same time, he was a warrior against racial injustice, fought for people with disabilities and was a tireless campaigner for a wider appreciation of jazz in America (what he termed Black Classical Music). Packed with electrifying archival footage of Kirk and his music, intimate interviews, and inspired animated sequences; Adam Kahan’s The Case of the Three Sided Dream, is an absorbing look at the man who wouldn’t even let partial paralysis keep him from pursuing what he called “The Religion of Dreams.”

The Case of the Three Sided Dream premiered at the 2014 South by Southwest film festival and also was screened at Full Frame, Blue Note Jazz Festival, IFC Center, IDFA, Sound Unseen, Big Sky, Noise Pop, PAFF LA and Atlanta, MIFF, Raindance and many other festivals, towns, countries and venues over the past year.

“Rahsaan was a beautiful human being and a phenomenal musician.
This film captures him in all of his depth, musical force and spirituality.
BRIGHT MOMENTS!” – Dorthaan Kirk

The film will be released world wide and will be a joint release by Monoduo Films, Vimeo on Demand, Syndicado and Arthaus. It will be available to stream and download on Vimeo On Demand May 1, available on iTunes May 31 and on DVD this Fall. Further screenings are also planned for later this year in New York, LA, Toronto and Europe.

Additionally Adam Kahan and the estate of Rahsaan Roland Kirk are laying the groundwork for a biopic on Kirk and seeking an executive producer.

About the Director:
Adam Kahan is a filmmaker living in Brooklyn, New York. He started making films in 1989 in San Francisco, when he bought his first Super 8 camera. His first short film “Eyeball” played the San Francisco Film Arts Foundation festival in 1992, and multiple other festivals in the states and abroad. Adam works across multiple genres from documentary to narrative to experimental, and has worn multiple hats including Director, Producer, Writer and Editor. He has also made several short documentaries on contemporary artists (such as Andres Serrano, Fred Tomaselli and Urs Fischer) that have played on national television and in festivals internationally. The Case of the Three Sided Dream is his first feature.

For more information on The Case of the Three Sided Dream, please visit: RahsaanFilm.com