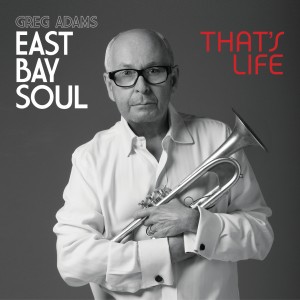 “The spark that struck the chord for the creative process” say’s Adams ”hit me when I heard in my head a bombastic themed song with an orchestra and a big horn section that reminded me of the iconic “That’s Life” recorded by Frank Sinatra. I wrote the song with Nick Milo and sent it to lyricist Rocky Maffit. Rocky had it for a while and nothing was coming to him, until one day he said “Damned If I Do” out loud. Now we had the title and lyric for the song. The recording was almost done and I thought to myself what do I call the album and there it is was staring at me “That’s’ Life”…

The sound of Greg Adams is one of the world’s best-known musical signatures. Adams has recorded six solo albums, three releases with East Bay Soul and fourteen recordings as a founding member of Tower of Power, legendary for his arrangements that made the TOP horn section a sought out entity all its own. His 1995 debut Hidden Agenda went all the way to #1 on Billboard and stayed there for five weeks… He hasn’t looked back since. With countless collaborations in the studio and live on stage, Adams has made his mark on a broad stretch of today’s music landscape that includes jazz, pop, rock, R&B, soul, and funk.

East Bay Soul is the next creative step forward in a career filled with magic moments spanning over four decades, garnering both Grammy and Emmy nominations and an International Broadcasting Award from The Hollywood Radio and Television Society along the way. An enduring recording artist and performer, the charismatic trumpeter has earned the respect of his peers and fans alike worldwide.

As the album unfolds with the sexy “Little Black Dress”, Adams realizes he’s writing the music first and the lyrics will come next, an interesting process that lyricist Maffit says was so much fun, because it usually is the other way around. The mysterious ”Hush Hush” is co-written with Dwayne “Smitty” Smith. “Is just so “Dope” as Adams calls it. The groove and trumpet melody are so minimal we just let the song end itself… “ Notably “ Come Together” by The Beatles pays deference to the original fueled by Greg’s muted trumpet. Adams artfully produced the sonic funk driven “Earth To Mars” with a magnetic performance that is both retro and modern.

The album boasts four songs with a full orchestra, lush arrangements masterfully orchestrated by Greg. “ Grow Old With Me” tells a story of love at first sight. “Without You” is a story without lyrics that conveys the story of love lost… Greg’s soulful trumpet is infused here. Darryl Walker’s stirring vocal performances on “ Going In Circles” and “ Let’s Stay Together” are delivered with soul and passion that embodies the timelessness of these two classic R&B songs.

Fueling the funk… is a dream horn section headed by Adams known for his percussive and on top of the beat style, endures throughout the album and is a tight a horn section as they come. Lee Thornburg, trumpet, flugelhorn, French horn and trombone, Johnnie Bamont, alto, tenor and bari sax. Greg Vail, alto and tenor sax.

With East Bay Soul Greg say’s “ It’s like looking bliss in the eye. Before you know it we’ve made a record. It is amazing how it happens.”