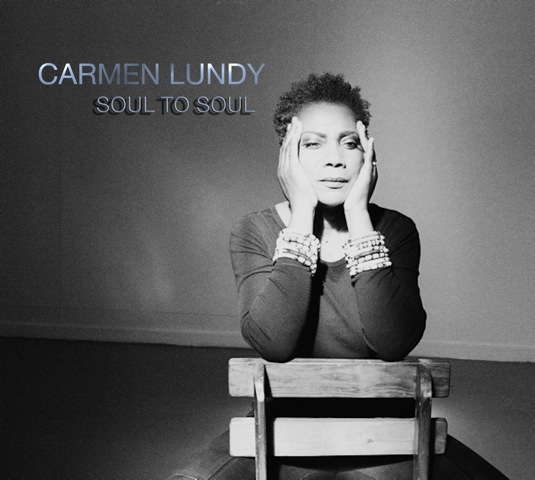 Los Angeles, California. “Soul To Soul,” a passionate new song cycle from vocalist, songwriter, producer and musician Carmen Lundy, is set for release September 23rd, 2014 via Afrasia Productions. “Soul To Soul”, Lundy’s 14th album, is the next chapter in her critically-acclaimed career as both a musical artist and a visual artist; a return to her roots but also an exploration of these roots — and the journey that those roots can take you on. The release of “Soul To Soul” will be accompanied by tour dates both in the U.S. and overseas.

Carmen Lundy began working on “Soul To Soul” well over a year ago in a very hands-on manner – literally composing, co-composing and arranging eleven of the thirteen tracks and then playing and recording all the instruments – including bass, drums, piano, guitar and percussion – in her home studio to get a working “feel” for how the music might sound. She then “sweetened” the songs by adding string sounds and other software instruments to elaborate and experiment with the aural mood of each track, interpreting and identifying with each track’s sound individually as well as part of the overall song sequence. On the final CD, Lundy plays guitar on all tracks, piano and Rhodes on many tracks, and drums on two.

“I wrote the music with specific players in mind for each respective instrument,” says Lundy. “My producer and label co-owner Elisabeth Oei encouraged me to reach out to those musicians whose music I have loved and have been inspired by; some of whom I had worked with but never recorded with. I consider these artists specialists on their instruments. These are players who bring a distinctive sound to everything they play andadd another layer of individuality to my original music.”

Patrice Rushen, for example, is featured on nearly every track on “Soul To Soul” because of the deep musical connection Carmen felt with her. “I could hear her sound in my music,” says Lundy, “Patrice creates these beautiful sonic palettes from which I could soar freely through the music. This project would not be as special to me if it were not for her incredible contribution.”

Featuring the stellar talents of guest artists Patrice Rushen, Geri Allen, Randy Brecker, Mayra Casales, Simphiwe Dana, Bennie Maupin, Carol Robbins, Ada Rovatti, and Warren Wolf along with Carmen’s core rhythm section members Darryl Hall and Jamison Ross , “Soul To Soul” invites the listener on an intriguing journey. Whether the source of inspiration comes from time spent in Sardinia, Italy (“Soul To Soul” and “Sardegna”) or from her hometown of Miami in the songs “Kindred Spirits” and “Grateful” – “It’s important to acknowledge and remember where you come from and all those who provide unwavering moral support” says Lundy; from the beauty of Mary Lou Williams’ “What’s Your Story, Morning Glory” – “Geri Allen and I have spent many years performing the works of this great pianist,” Lundy remarks, “I could not miss the chance to have yet another of the great pianists/composers of our time be a part of this musical journey”; to the sexy bossa nova beat of “Everything I Need”, the moods and moments of “Soul To Soul” are genre-bending and traverse many borders, both literally and figuratively.

Of special note is the story of the track “Grace,” the result of a meeting with South African vocalist Simphiwe Dana. At the time of the meeting – which coincided with tour dates Lundy and Dana had in Johannesburg and Los Angeles – Lundy was in the process of writing the song on guitar and had been haunted by it for months. She then played the track for Dana who immediately began to sing the melody in her native tongue, and whose contribution to the track on the CD adds yet another dimension to the journey of “Soul To Soul.”

Added Lundy, “It is an honor to have these players joining in this majestic musical adventure. I hope listeners – both new and established – enjoy the voyage.”