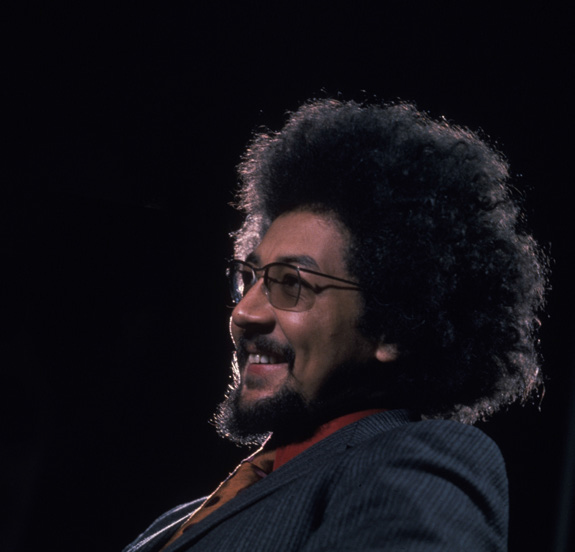 In the words of a classic TV show, there are eight million stories in the Naked City. Resonance Records uncovers a pair of long-untold tales from New York City’s fabled jazz past on “Manhattan Stories,” due for release on September 9. These two performances capture the always-extraordinary saxophonist and flutist Charles Lloyd in 1965, leading a remarkable and previously unrecorded quartet featuring three jazz giants: guitarist Gábor Szabó, bassist Ron Carter, and drummer Pete La Roca.

The story told by these two concerts is one of an already-distinctive voice at the outset of a now-legendary career. In 1965, when these sets were recorded at the now-defunct venues Judson Hall and Slugs’, Lloyd was fresh from his stint with drummer and bandleader Chico Hamilton, where he’d first crossed paths with Szabó. Lloyd already had two albums to his name; both Carter and Szabó are heard on his second for Columbia, “Of Course, Of Course,” from which two titles on these new dates are culled. Within a year he would form his groundbreaking quartet with Keith Jarrett, Cecil McBee, and Jack DeJohnette. 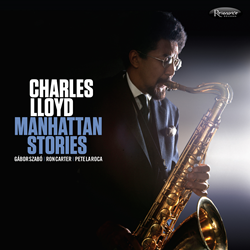 Szabó himself was on the verge of cementing his name in the jazz canon, starting his acclaimed run of Impulse! releases the next year. Carter was midway through his stint with the second great Miles Davis quintet, while La Roca had already worked with a host of names from the music’s pantheon, including John Coltrane, Sonny Rollins, Bill Evans, and Joe Henderson.

“It was a specific time and place,” Lloyd told “Manhattan Stories” annotator Don Heckman. “We all felt like the boundaries were being dissolved and we could do or try anything. This is a music of freedom and wonder—we were young and on the move.”
Together, the band embarks on a series of adventurous excursions through pieces like Lloyd’s classic “Sweet Georgia Bright” and “Dream Weaver” as well as Szabó’s “Lady Gabor,” originally recorded by the Chico Hamilton Quintet. Nothing on either disc clocks in at under ten minutes, allowing every member to stretch out and fully explore this mesmerizing material. “Manhattan Stories” showcases, with more than 80 minutes of music, a truly expressive group interaction that remains otherwise undocumented.

“The first time I heard these recordings, I was blown away and knew immediately how special they were,” says co-producer Zev Feldman. “This just might be the holy grail for longtime Charles Lloyd fans like myself who think they’ve heard it all. No way. Not yet! There have been archival recordings released over the years with the classic quartet featuring Jarrett and DeJohnette, but there’s never been a release with this group before—and not just a group, but a group with four legendary masters. The music and spirit are very exciting. The interplay between Charles and Gábor alone is a testament to their genius. It’s a real gift for us to share this with the world.”

The Judson Hall recording comes from the archives of Resonance founder George Klabin, whose trove has previously yielded treasures from Bill Evans and Jimmy Giuffre. In fact, the first disc included here was recorded on a festival date shared with Giuffre that was released this year on the Elemental Music label. The occasion was Charlotte Moorman’s Avant Garde Festival of New York, produced by saxophonist and jazz critic Don Heckman, who contributes an essay to “Manhattan Stories.”

Klabin, then a 19-year-old student at Columbia University, had recently been appointed head of the jazz department at university radio station WKCR-FM and sought to present original recordings as part of his show. He recorded the Judson Hall show with up-close microphone placement techniques and state-of-the-art engineering—well ahead of 1965 standards. The Slugs’ performances were recorded by Bjorn von Schlebrugge, who accompanied Lloyd to his Manhattan gigs.

In 2009, Feldman brought Klabin’s tapes to Lloyd’s California home to play for the saxophonist, who raised the ante with his own recordings of the quartet. Those tapes, which comprise Disc 2, were made the same year at Slugs’, which Feldman calls “one of the most important jazz shrines there ever was. I wanted to celebrate the memory of that club as well.” The release thus received not only Lloyd’s blessings, but his wife, Dorothy Darr, signed on as co-producer.

For Record Store Day last month, Resonance offered a limited-edition pressing on orange, marble-colored 10-inch, 140-gram vinyl of “Live at Slugs’,” designed to be a collector’s piece for fans and as a pre-release teaser of the full release to come. The 10-inch featured two cuts from “Manhattan Stories.”

“Manhattan Stories” features the pristine sound quality, extensive liner notes, and meticulously designed artwork that have become Resonance Records’ trademarks. In addition to Heckman’s reminiscences, the set includes liner notes by Feldman, Willard Jenkins, Stanley Crouch, and renowned producer Michael Cuscuna (who shares executive producer credit with Klabin on this project). The music, which was mixed at Resonance’s Los Angeles studios, will also be available as a 2-LP set pressed by audiophile-respected R.T.I. (Record Technology Inc.). It was mastered for CD and vinyl by Bernie Grundman.

“I was determined to build perhaps the most exciting package for Charles ever assembled for one of his releases,” Feldman says. “I think we’ve accomplished that in a way that truly celebrates this master.” “Manhattan Stories” showcases stellar music in an ideal setting—much as those two NYC venues did on a pair of unjustly forgotten evenings nearly fifty years ago.