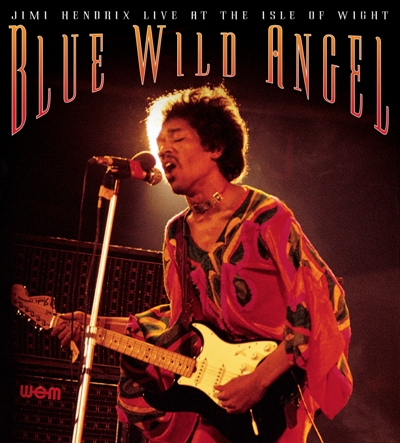 Blue Wild Angel: Jimi Hendrix Live At The Isle of Wight to be Released on Blu-ray for the First Time Ever on June 17th, 2014

Blue Wild Angel draws heavily upon Academy Award winning director Murray Lerner’s vast archive of previously unseen performance footage and presents some of Hendrix’s finest ever concert performances, including Jimi Hendrix Experience classics such as “Foxey Lady,” and “Red House,” but also songs such as “Freedom,” “Ezy Ryder” and “In From The Storm” that he was working on for his new studio album just before his passing in September of 1970, in addition to his timeless version of Bob Dylan’s “All Along The Watchtower.” The band kicks things off though with a unique medley of “God Save The Queen” and “Sgt. Pepper’s Lonely Hearts Club Band,” a tune the Beatles themselves never performed in a live setting.

England’s Isle of Wight Festival, which had its original run from 1968 to 1970, could be considered the Woodstock of Europe, and it provided the perfect setting for Hendrix’s return to the country that birthed his career, after an 18-month hiatus. This was the first time his new band, consisting of bassist Billy Cox and original drummer Mitch Mitchell, performed on UK soil.

In depth interviews with Billy Cox, Mitch Mitchell, and others set the stage for the concert footage that follows. In addition to providing the definitive look at one of the landmark events in Hendrix’s storied career, Blue Wild Angel features both a stereo and 5.1 audio surround soundtrack mixed by Hendrix’s original recording engineer Eddie Kramer.

The Blu-ray version of Blue Wild Angel contains all of the outstanding extra features included in the DVD, such as footage of “Hey Joe,” which was not in the original release, a behind the scenes interview with Murray Lerner, rare artifacts and memorabilia, including reproductions of original tickets, festival posters, and even Hendrix’s own handwritten directions to the festival site.  Lerner’s multiple cameras present Hendrix’s distinctive guitar playing onstage like no other film, and like the DVD, the Blu-ray version allows for simultaneous viewing of multiple camera angles – expanded to include “God Save The Queen,” “Sgt. Pepper’s Lonely Hearts Club Band,” “Spanish Castle Magic,” All Along The Watchtower, “Machine Gun,” “Red House,” “Foxey Lady,” and “In From The Storm.”

11. Dolly Dagger (Live At The Isle Of Wight)

13. Message To Love (Live At The Isle Of Wight)

16. Voodoo Child (Slight Return) (Live At The Isle Of Wight)