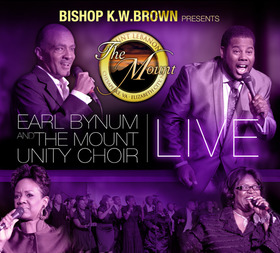 Chesapeake, VA — Mount Lebanon Cathedral in Chesapeake, VA is home to a pristine and spirited choir of over 100 unified voices. Under the ministerial leadership of Bishop K.W. Brown and the musical direction of Minister Earl Bynum, the choir released their debut CD/DVD in May which landed on Billboard’s Top Gospel Sales Chart at #8. The Mount Unity Choir has now been named THE BEST CHURCH CHOIR at Steve Harvey’s 2013 Neighborhood Awards “The Hoodie Awards”.

The HOODIE AWARDS are the brainchild of Steve Harvey and television/radio producer Rushion McDonald. The show honors local businesses, religious and neighborhood leaders, churches and high schools for their contributions and excellence within their own neighborhoods. The Hoodie Awards features a diverse and ultra talented group of celebrities, actors, athletes, and recording artists who present 12 non-traditional awards to the stars of this nation’s neighborhoods.

The Mount Unity Choir personifies a church choir of distinction and have sparked a sound of praise that has resounded throughout the nation with their hit single “Bless The Name Of The Lord”. The choir’s CD /DVD project features guests appearances by Dr. Judith McAllister, Evangelist Lemmie Battles, Charmaine Swimpson and is released by K.W. Brown Ministries / Habakkuk Music / INgrooves Fontana Distribution.

Earl Bynum and The Mount Unity Choir just received the Choir of the Year Award at the 2013 Gospel Blue Mic Awards in July. They are also nominated for five DMV Music Awards which will be awarded on September 21 in Washington, DC.