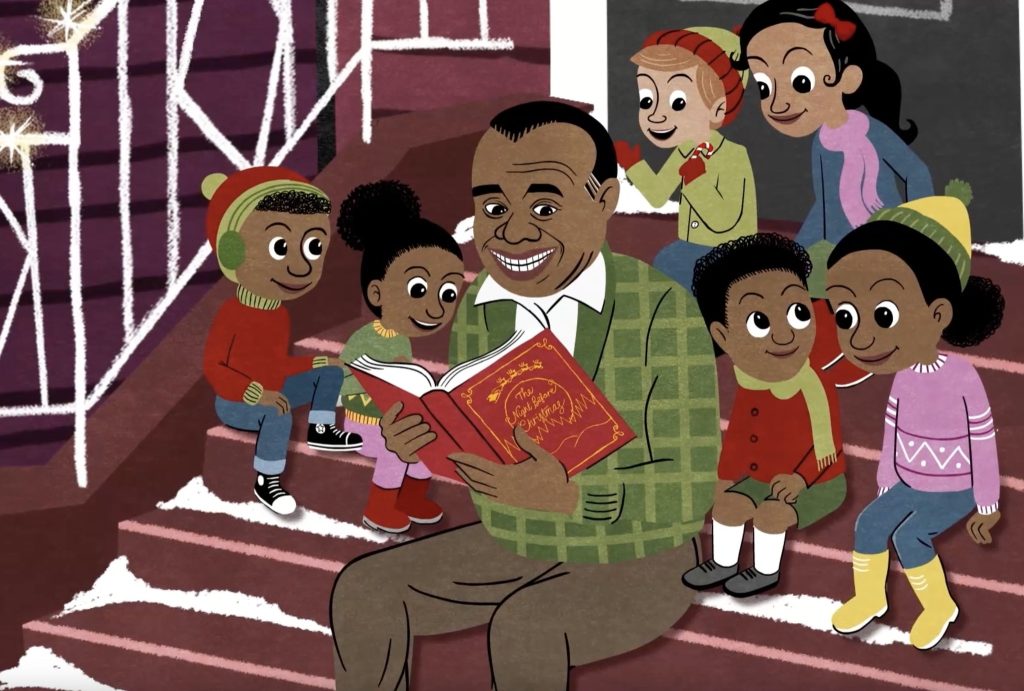 LOUIS ARMSTRONG’S POIGNANT RECITING OF CLASSIC HOLIDAY POEM “A VISIT FROM ST. NICHOLAS” (“THE NIGHT BEFORE CHRISTMAS”) BROUGHT TO LIFE IN BEAUTIFUL ANIMATED VIDEO TO USHER IN THE HOLIDAYS

Los Angeles – November 18, 2022 – Louis Armstrong’s poignant reciting of Samuel Clement Moore’s beloved, timeless poem “A Visit From St. Nicholas,” more popularly known as “The Night Before Christmas,” has been vividly brought to life with a beautiful animated video to usher in the holiday season. Produced and directed by Tom Readdy and Lucy Dawkins at the award-winning creative house Yes Please Productions, the video was animated in a vintage storybook style by animators Sam Shaw, Jac Clinch and Chris Bowles.

“A Visit From St. Nicholas” is featured on the just-released album, Louis Wishes You A Cool Yule (Verve/UMe), which collects nearly the entirety of Armstrong’s holiday output and presents the recordings as a cohesive body of work, marking his first-ever official Christmas album. The first non-live recording of Armstrong’s to be released in more than 20 years was recorded by himself on a reel-to-reel tape recorder at his home in Corona, Queens, New York in February 1971 just a few months before he passed away. It’s unknown why exactly the ailing artist felt compelled to record the holiday staple months after Christmas, but it would end up being his final recording, and now an unexpected gift for fans more than 50 years later. Specially for this collection, the recording has been paired with a newly recorded musical underbed by New Orleans pianist Sullivan Fortner.

Since his passing in 1971, Armstrong’s legacy as one of the most beloved and influential jazz artists of all time has only continued to grow, while his enduring catalog of recordings remains timeless. Born in New Orleans, Armstrong (1901-1971) began his career in the ‘20s, bringing his Dixieland background to Chicago, New York City, and Los Angeles. By the time he became an internationally-renowned star in the ‘40s, the hardworking singer, bandleader, actor, and trumpet player was spending nearly 300 days on tour every year. One constant throughout these shows, however, was the spirit of Christmas.

As a child, Riccardi writes, Armstrong “did not have much time for Christmas… life necessitated that he drop out of school and go to work while still a young boy to help support his mother and sister.” After his marriage to Lucille Wilson, however, the holidays took on a new meaning—particularly when the couple was on the road. Riccardi continues, “With the holidays approaching, Lucille bought a small Christmas tree and set it up in their hotel room. According to Lucille, Louis ‘just looked at it and looked at it and told me, ‘This is the first tree I’ve ever had.’ Louis refused to let Lucille take it down and insisted they take it with them on the rest of the tour. The Armstrongs would continue this tradition, Lucille later remarking that they continued setting up ‘a table tree and holiday fixings in whatever hotel in whatever country we happen to be in.’

Perhaps, it is that love of Christmas that accounts for Armstrong’s somewhat mysterious reading of “A Visit from St. Nicholas.” Whether Satchmo was giving fans one final present, or simply finding comfort in his favorite holiday, it is certain that the recording, and this album, will deliver plenty of Christmas magic.