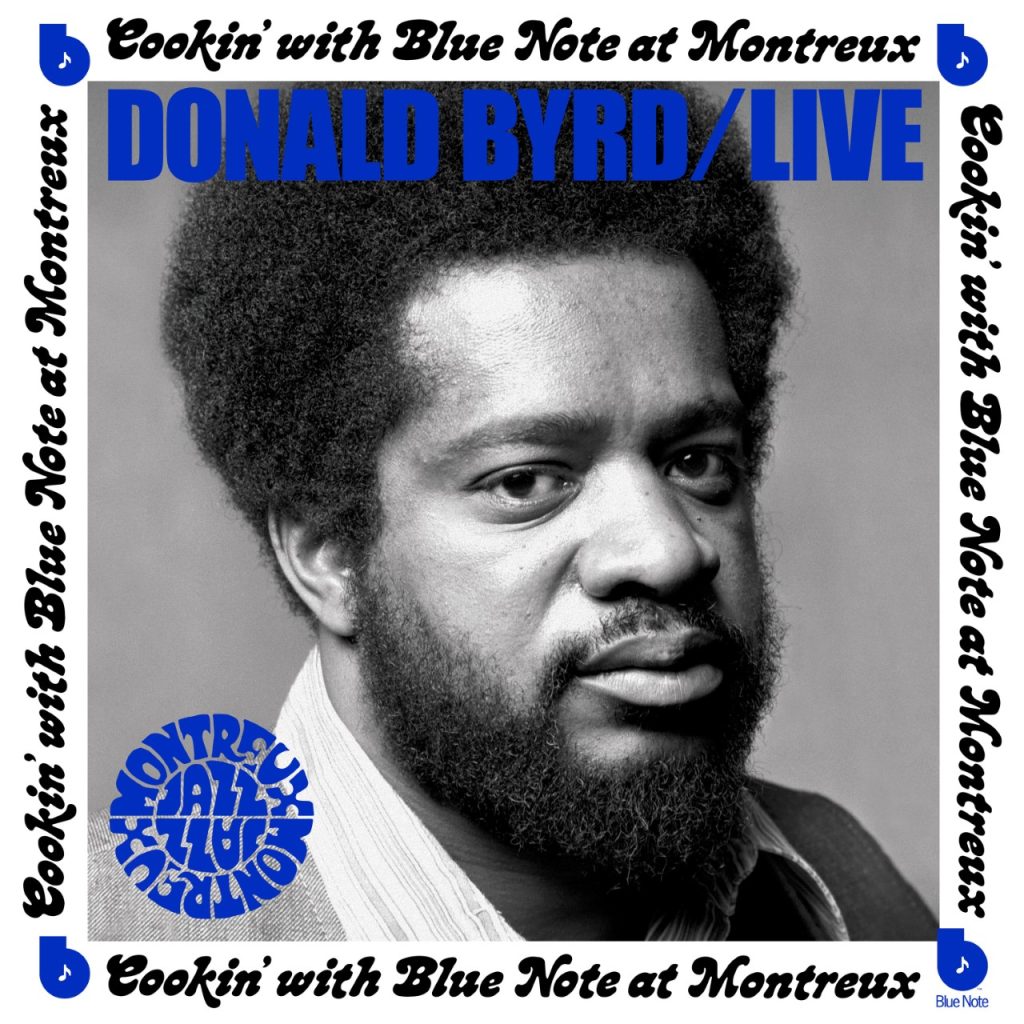 DONALD BYRD
LIVE: COOKIN’ WITH BLUE NOTE AT MONTREUX
DYNAMIC 1973 LIVE SET GETS FIRST-EVER OFFICIAL RELEASE DEC. 9
ON WHAT WOULD HAVE BEEN THE LEGENDARY TRUMPETER’S 90th BIRTHDAY

Blue Note Records has announced a first-ever official release of Donald Byrd Live: Cookin’ with Blue Note at Montreux on what would have been the legendary trumpeter’s 90th birthday: December 9, 2022. The dynamic 1973 live set is available for pre-order now on Blue Note Store exclusive blue vinyl, black vinyl, CD, and digital download. The vinyl release is all-analog cut directly from the original analog master tapes.

That summer, Byrd was fresh off the release of his hit crossover fusion album Black Byrd, the first of his innovative and incredibly successful studio collaborations with producer Larry Mizell. But in a live setting the band had a rawer, harder edge, as this searing set attests. Byrd led a 10-piece band that included Larry Mizell on synthesizers, Fonce Mizell on trumpet and vocals, Allan Barnes on tenor saxophone and flute, Nathan Davis on soprano and tenor saxophone, Kevin Toney on electric piano, Barney Perry on electric guitar, Henry Franklin on electric bass, Keith Killgo on drums, and Ray Armando on congas and percussion. The set list includes Larry Mizell’s tune “Black Byrd” along with otherwise unrecorded Byrd originals like “The East,” “Kwame,” and “Poco-Mania,” as well as an excellent cover of Stevie Wonder’s “You’ve Got It Bad Girl.”

Larry Mizell: “My brother Fonce and I were invited by Blue Note Records (President George Butler & Donald Byrd) to travel with the Blue Note artist roster to attend and perform at the 1973 Montreux Jazz Festival. At the time, Donald Byrd’s ‘Black Byrd’ album was a big success for Blue Note, along with Bobbi Humphrey’s ‘Blacks and Blues.’ The American Airlines plane was playing various cuts from ‘Black Byrd’ as part of the cabin music. The plane ride over was fun, energetic, and wild. The stewardesses were pleading for the passengers to go back to their seats as the aisle was packed with non-stop exuberance.”

Don Was, President, Blue Note Records: “Shortly after Mr. Byrd’s passing in 2013, we got an email from the noted British music icon, Gilles Peterson, inquiring about a legendary performance from 1973’s Montreux Jazz Festival. Inexplicably, the tapes had been tucked away in the Blue Note vaults. When we listened, we were knocked out: the 16-track, 2” analog master tapes revealed a more raw and gritty side of Donald Byrd’s 70’s music. As a special tribute to this Jazz Immortal and as a gift to the legions of aficionados who, like all of us at Blue Note Records, treasure the music he’s left behind, we are honored to present – on vinyl and CD for the first time – Donald Byrd, Live at Montreux from July 5, 1973.”

The track listing and credits for Live: Cookin’ with Blue Note at Montreux are as follows: