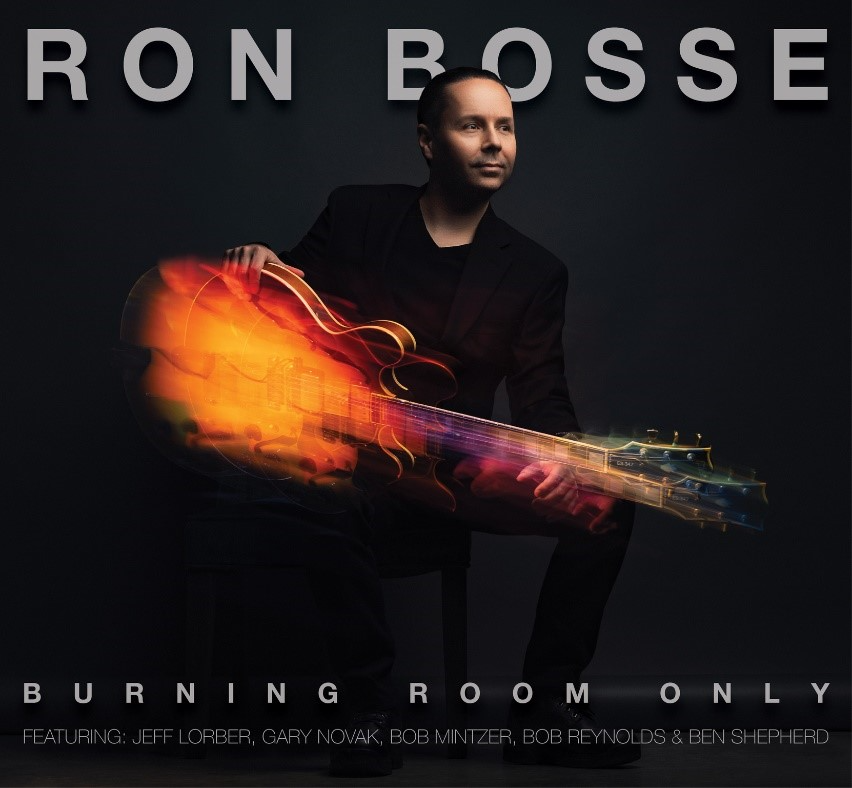 BOSTON (19 September 2022): Inherently jazz is about collaboration, the sum of the whole being greater than the parts due to the magic that results from improvisation when the chemistry amongst the musicians is right. That’s the approach jazz fusion guitarist Ron Bosse took to record “Burning Room Only.” The Boston-based fretman hooked up with Grammy-winning fusion icon, keyboardist Jeff Lorber, to write and record the eleven-song set produced by Lorber that drops October 28 on the Deep Cat Records label.

Bosse views “Burning Room Only” as a mindset. Yes, musicians love to describe scorching performances as “burning,” and that certainly applies to the masterful musicianship on display throughout this collection, but Bosse takes the meaning deeper.

Citing jazz guitar great Pat Martino’s “El Hombre” as inspiration for the groove-jazz style of play that proliferates “Burning Room Only,” Bosse said, “There are two songs on Pat’s album – “Cisco” and “A Blues for Mickey-O” – that are more groove oriented rather than traditional swing, yet Pat still solos with his classic linear approach of fluid eighth-note lines. Ever since hearing that album, I’ve wanted to record an album that was groove oriented, with a contemporary rhythm section, but where the guitar still had a classic clean jazz tone, and the solos were super swinging. With ‘Burning Room Only,’ I think we nailed this approach.”

First out of the gate is the album opener, “Bossman,” which was issued as a single last Friday (September 16).

“My solo on this song really crystallized some of the technical approaches I had been working on for quite some time. I was going for a super streamlined and fluid way of playing eighth-note lines over funky 16th-note-based grooves, and I feel like I really locked in this approach on this song. It definitely set the tone for the solos that followed. Anyone who knows me, knows that I am very dedicated to my instrument in the sense that I’m constantly practicing. In the years leading up to recording this album, and throughout the recording process, I got to a heightened level of practicing of almost 6-8 hours a day. I was really trying to push myself as hard as possible to be able to improvise as fluidly as possible without boundaries with respect to tempo. Essentially, I wanted to be able to play anything that came to my mind and be able to deliver it effortlessly,” said Bosse, who was called “Bossman” by friends when he was a kid.

Tracks from “Burning Room Only” will aptly be promoted at multiple jazz radio formats. Sweetly melodic, invitingly familiar yet grand and challenging in scope, “Kiss The Sky” will begin collecting playlist adds on the smooth side of jazz on September 26.

“To me, the song takes you on a journey through every twist and turn. The melody evolves throughout the song without much repetition, and keeps you closely engaged. The harmony is very complex and enchanting. This was one of the first songs on the album that made me see the true genius behind Jeff’s writing. He has this unique ability to write extremely rich chord progressions, yet he keeps the melody so strong and memorable that you sometimes miss how elaborate it really is. I think that with all art, this is a constant challenge – trying to balance complexity and richness with accessibility,” said Bosse.

Funky with a rock edge that Bosse says reveals his love for Stevie Wonder and Lenny Kravitz, “Rumble Strip” will hit as a second single on October 7.

Meticulously attentive to details large and small, Bosse poured a lot into making an impactful statement on “Burning Room Only.” And he knew that statement would benefit in ways unimagined via collaboration. In Lorber, Bosse not only found a producer and co-songwriter, but a partner with a shared ethos who is able to coax the best performances possible from the guitarist. Lorber also played a role in surrounding Bosse with the finest musicians available. The chemistry and community formed during the recording sessions elevated the project, forging lasting bonds.

“When I first began the process of recording this album with Jeff, I immediately noticed that we shared similar values in that we feel that all aspects of the production require a high level of attention and detail. Not only is it about the songs, it’s about the orchestration, it’s about the musicians, the solos, the way it’s recorded, how it’s mixed and mastered, the album artwork, the song titles. One of the things I think about when reflecting on the process of writing and recording the album is how collaboration can yield a result far more unique than going it alone, especially if you put the right people together,” Bosse reflected.

“This time period has been one of the most prolific for me which is a true testament to the power of collaboration. My most memorable experience throughout the process of recording this album is the camaraderie and connection with the musicians involved. It’s these personal experiences that really mean the world to me.”