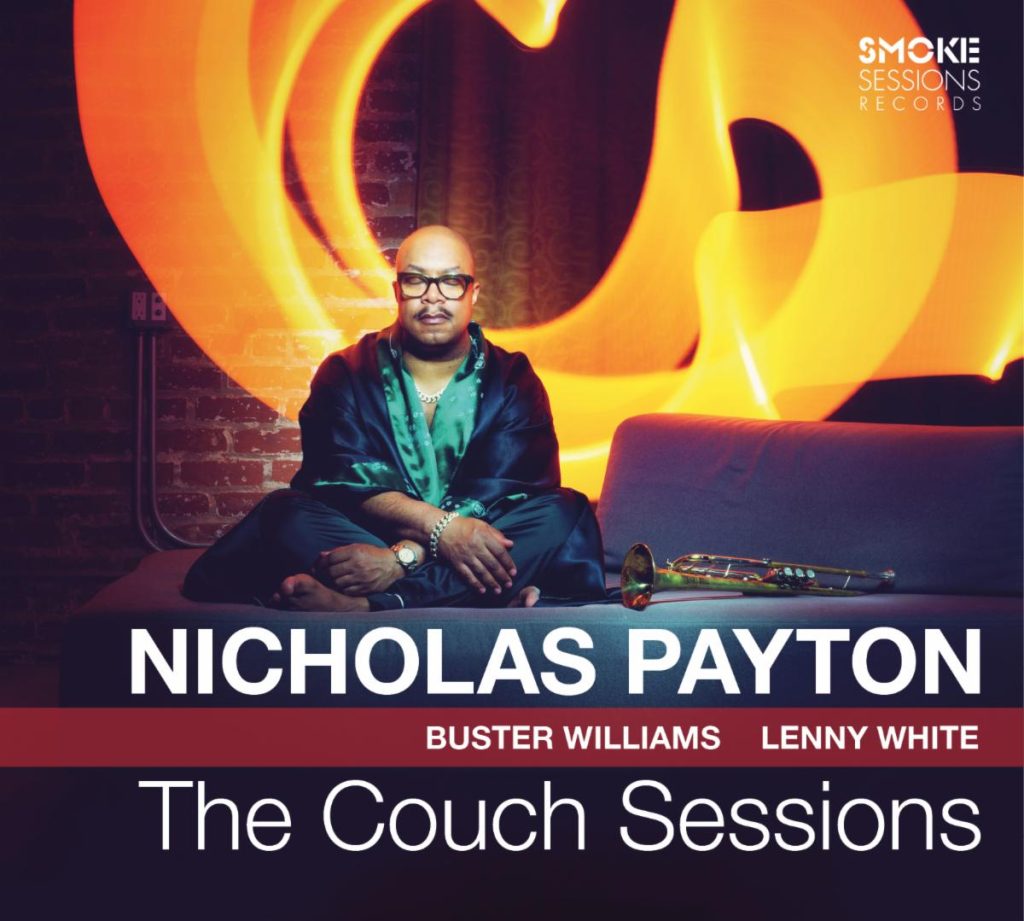 Due Out November 25 on Smoke Sessions Records, the Trio Album Features the Dream Rhythm Section of Buster Williams and Lenny White, as Well as the Compositions and Sampled voices of Masters Like Herbie Hancock, Wayne Shorter, Keith Jarrett and Geri Allen

Music has the power to heal, a fact that has never been as relevant as it has over the challenging last few years. On his captivating new album, The Couch Sessions, the brilliant multi-instrumentalist and composer Nicholas Payton provides a session of musical therapy that draws on the compositions and words of some of the music’s most visionary artists.

Due out November 25, 2022, The Couch Sessions is the latest in a series that Payton has recorded for Smoke Sessions Records pairing him with dream rhythm sections. The album follows 2019’s Relaxin’ with Nick, featuring bassist Peter Washington and drummer Kenny Washington; and Smoke Sessions from 2021, which teamed legendary bassist Ron Carter and Payton’s longtime collaborator Karriem Riggins on drums.

On this outing, Payton is joined by bassist Buster Williams and drummer Lenny White, who not only have forged one of the most distinctive rhythm tandems in recent decades but have also worked with many of the legendary artists to whom this album is dedicated.

“I decided to use Buster and Lenny for their shared history,” Payton says, “not only working with each other but also with my favorite artist ever – Miles Davis. There are a lot of connections between the artists on the album and the lineages that they either came out of or were integral in starting. Working with Buster and Lenny together was a bucket list item for me.”

Those partnerships include the late pianist Geri Allen, whose composition “Feed the Fire” opens The Couch Sessions. Williams and White played together with Allen on her 1998 Verve album The Gathering as well as on Williams’ 2001 trio date Houdini. As Payton lays down the shimmering melody on Rhodes, we hear Allen speak of her roots into the eclectic, genre-blurring Detroit music scene.

The use of samples, which Payton triggers from his iPhone, adds to an ever-growing arsenal for the master musician. Payton is of course best known as a trumpeter, but he’s also become a virtuoso keyboardist performing on piano, Fender Rhodes, and Clavinet developing a singular approach to accompanying himself. Keith Jarrett’s airy ballad “Blossom” offers a showcase of Payton’s sensitive touch on the piano, buoyed beautifully by the gentle rhythmic sensibilities added by Williams and White, all illustrating Jarrett’s words regarding the elusive nature of improvised music.

Jarrett has long been a favorite of Payton’s – the pianist’s “No Lonely Nights” was part of the repertoire for Smoke Sessions – but he’s also one of multiple connections to Miles Davis contained on The Couch Sessions, Williams and White among them. The album also includes two compositions apiece by Herbie Hancock and Wayne Shorter, both important members of the trumpet icon’s revered quintet in the 1960s.

Shorter recalls the telepathic nature of that band on “Pinocchio,” while the saxophonist’s “Fall” is given a funky, Rhodes-driven treatment that harkens back to White’s career-launching appearance on Davis’ classic Bitches’ Brew. Payton is back on piano for a brisk treatment of Hancock’s “Watch It,” and the composer can be heard reminiscing about a memorable night on stage to lead into “The Sorcerer.”

Two of Payton’s original pieces for the album pay direct homage to his collaborators on the album. The slinky “Bust-a-Move” was originally titled “One for Buster” until a punning outburst from White rechristened the sample-heavy tune. “His Name Is Lenny” incorporates a catchphrase from ’70s sitcom Good Times over White’s expressive and colorful drumming.

“Bleek’s Blues” is named for Denzel Washington’s trumpet-playing character from Spike Lee’s Mo’ Better Blues, and serves as a reminder of the physical demands the instrument exacts. “Most great trumpeters at some point have had something happen to their chops,” Payton explains, “which forced them to reevaluate their playing, their lives, and their approach to the instrument. From Pops to Dizzy to Miles on to Wynton and Terence, pretty much every major trumpet player I know of has had some bout with that instrument that forced them to step away and take another look at it. So that song is an homage to trumpet players.”

Payton’s “Jazz Is a Four-Letter Word” revisits a track from 2017’s Afro-Caribbean Mixtape, the album that inaugurated the artist’s personal engagement with DJ culture. Graced once again with the influential words of Max Roach, who shares Payton’s disdain for the label “jazz,” this rendition allowed White to engage with one of his own influences. “Lenny found it quite inspirational to hear Max while he was playing,” Payton recalls. “He plays these little Max things while [Roach] is talking and interacts with him in that way. I’ve had several drummers play that tune but no one’s approached it that way before, which I thought was really hip.”

The album ends with “From a Flicker to a Flame…” featuring the voice of Revive Music Group founder Meghan Stabile, who tragically passed away at the age of 39 in June. “Meghan was another visionary,” Payton says. “She had her beginnings as a performer but found that her strengths were better served on the business side. It takes a whole community of people to make this music viable, and the work she did to introduce this music to a younger audience was so important. This is my contribution to help keep her legacy alive.”

Throughout The Couch Sessions, Nicholas Payton and his stellar trio play therapist to listeners in need of some vital musical counseling. “In these uncertain new times, the importance of music and the arts has come even more to the forefront,” he says. “With this album, I wanted to speak to music as a healing force, an essential source of light in our lives.”