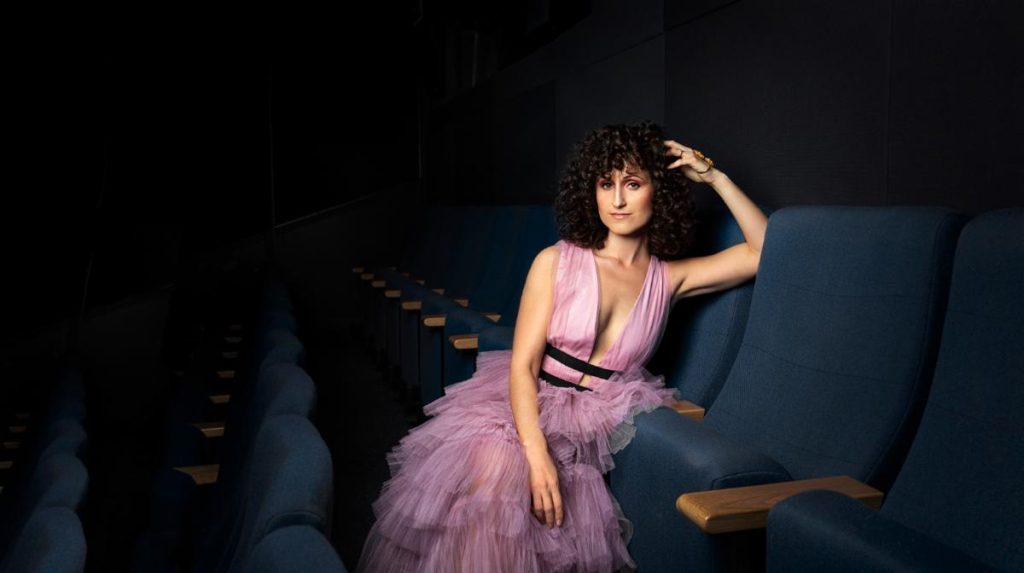 Due Out October 7 on Challenge Records, Saudade, Colour of Love Features Orchestral Arrangements of Songs from Her Grammy-Nominated Album Close To Me

Hailing from Portugal and based for the last decade and a half in the Netherlands, Grammy and Latin Grammy Award-nominated vocalist and composer Maria Mendes is no stranger to living between two different worlds. With her critically acclaimed 2019 album Close To Me, Mendes, whose praises have been sung by such legendary composers as Quincy Jones and Hermeto Pascoal, spotlighted her ability to bring disparate influences together in stunning fashion with her vibrant fusion of symphonic jazz and Portuguese Fado, the folk music of her homeland.

Far from having exhausted the possibilities of that project, Mendes brings her singular vision to the concert stage in collaboration with master keyboardist/arranger John Beasley and the revered Metropole Orkest on her breathtaking new live album, Saudade, Colour of Love. Due out October 7, 2022 via Challenge Records, the album further expands the emotional intensity of its predecessor’s thrilling hybrid sound with the backing of a full orchestra. The lush, velvety symphonic sound creates sparks when it meets the exhilarating interplay of Mendes’ brilliant quartet and the singer’s fervent vocals, resulting in an unforgettable evening of music.

In advance of Saudade, Colour of Love, Mendes releases the single “Hermeto’s Fado for Maria,” a new piece written for Mendes by the iconic Brazilian composer Hermeto Pascoal. The song was gifted to her in the form of a handwritten score on the back of a hotel room emergency exit instruction card. Pascoal gave Mendes free rein to do what she wished with the song, the only demand being, “Don’t you dare to not record it!”

The Dutch Metropole Orkest, the world’s leading pop and jazz orchestra, appeared on four tracks on Close To Me, but that was enough to convince Mendes that the collaboration could bear even greater fruit. “Working with the Metropole Orkest was so precious that it nurtured a seed in me that needed a lot more water,” Mendes says. “Bringing together jazz and Fado has been the most important and artistically fulfilling work that I have done, really feeding my soul. It’s been a new awakening to connect with this beautiful legacy that came from my ancestors.”

While Mendes and Beasley’s arrangement of “Asas Fechadas” garnered nominations for both Grammy and Latin Grammy Awards, the pandemic inevitably halted the album’s momentum. At the same time, it allowed the luxury of time to plan a truly spectacular showcase for expanded orchestral renditions of these songs to be premiered at two May 2022 concerts at Amsterdam’s Muziekgebouw aan’t IJ and at Parkstad Limburg Theaters in Heerlen. Mendes worked closely with John Beasley in arranging the music for the symphonic setting, while Beasley crafted majestic orchestrations for the Metropole Orkest.

Maria Mendes
From her native Portugal to her adopted home in the Netherlands, Grammy and Latin Grammy-nominated vocalist and composer Maria Mendes has traveled a world of musical expression. Hailed by DownBeat magazine as “a jazz singer of the highest order,” Mendes’ praises have been sung by such legends as Quincy Jones and Hermeto Pascoal. With Wayne Shorter’s blessings, Mendes premiered his contemporary jazz piece “Gaia” in June 2022 in Germany alongside the Bielefeld Philharmonieker, saxophonist Magnus Lindgren and pianist John Beasley. Mendes’ song “Inverso,” featuring Anat Cohen, was featured on the soundtrack of the International Emmy-winning Portuguese soap opera Ouro Verde in 2018. The vocalist has released four striking solo albums, most recently blending symphonic jazz and Portuguese Fado on the acclaimed Close To Me and the stunning live album Saudade, Colour of Love. Mendes’ wealth of influences and experiences help make up what Exclusive magazine called “one of the most engaging, enchanting vocal approaches… that exists today.”

Metropole Orkest
When you think of an orchestra, you think classical music. That’s not the Metropole Orkest. Playing jazz, pop, world music and film scores, the Metropole Orkest has shared the stage with legends such as Ella Fitzgerald, Dizzy Gillespie, Pat Metheny, Brian Eno, Herbie Hancock, The Basement Jaxx and Bono. The MO invests just as much in playing with the next generation of stars like Kovacs, Robert Glasper, Snarky Puppy, Cory Wong, Gregory Porter, Jacob Collier and Ledisi. Over the years, Metropole Orkest has received no less than 21 Grammy nominations and worked on 4 Grammy-winning productions. The orchestra has produced more than 150 albums and thousands of radio and television broadcasts, requiring over 600 arrangements per year in every imaginable style.

John Beasley
Grammy winning and Emmy nominated keyboardist, composer, and arranger John Beasley began his career working with such icons as Miles Davis and Freddie Hubbard and has gone on to perform with a wide range of artists, including Dianne Reeves, Ivan Lins, John Patitucci, Chaka Khan, Christian McBride, Carly Simon, to name a few. Beasley served as Music Director for international tours with Steely Dan, AR Rahman and Queen Latifah and co-MD for Chucho Valdes. He is also the Music Director for the International Jazz Day global gala concerts hosted by the Herbie Hancock Jazz Institute. He has released three albums on Mack Avenue featuring his acclaimed, Thelonious Monk-inspired big band the MONK’estra.