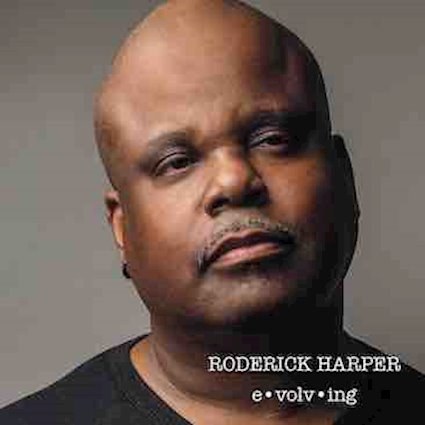 ‘Evolving’ is more than just the title of Harper’s new record; it’s his entire way of life. “I’ve spent the last few years deep in a process of self-discovery and change,” says the versatile vocalist. “I’ve been trying to understand myself, to peel off the cellophane and really get at what’s underneath. This album is the sound of me becoming the man I was always meant to be.”

Recorded live with a cast of friends and mentors (including appearances from late piano legend Ellis Marsalis, sax icon Donald Harrison, and vocalist/drummer Jamison Ross), ‘Evolving’ is both a homecoming and blank slate for Harper, a return to form and a start from scratch. The songs here span the full breadth of his remarkable journey and extraordinary talents, but rather than linger in nostalgia, they press forward with newfound immediacy and resolve. Harper’s delivery is vibrant and mesmerizing to match, his voice smooth as velvet as he charts his own distinctive course through a collection that’s equal parts head and heart. Sure, there’s plenty of vocal sophistication and dazzling instrumental work on the album, but at its core, ‘Evolving’ is all about raw emotion and gut instinct, about taking chances and breaking free. Harper is making up for lost time with this record, and he’s laying it all on the line in the process.

‘Evolving,’ opens with the intoxicating “Infinite Heart.” A collaboration between Harper (who wrote the lyrics) and Harrison (who wrote the music and lends a spectacular performance), the track sets the stage beautifully for an album that’s as surprising and spontaneous as it is warm and inviting, a collection that explores the rough edges of romance and regret with deep empathy and an unwavering belief in the resiliency of the human spirit.

While ‘Evolving’ is certainly a showcase for Harper’s transportive vocals, it also demonstrates his skills as a consummate interpreter of song, and his choices here double as something of a loose autobiography. He nods to his roots with a bouncy, playful take on Alvin Batiste’s “Salty Dog,” says farewell to Ellis Marsalis with a soft and silky rendition of “Never Let Me Go” (which features one of Marsalis’ final recordings), and looks back on his time with the Lincoln Center Jazz Orchestra on the Mingus classic “Duke Ellington’s Sound Of Love.” Throughout the album, Harper tips his cap to a host of friends and influences who shaped his journey (he salutes Shirley Horn with a jaunty performance of “The Great City” and celebrates Betty Carter with a gentle take on her “Look What I Got”), but he spends an equal amount of time looking forward, meditating on justice and race with the soulful “Someday We’ll All Be Free” and pushing his personal artistic limits with an adventurous performance of “Valsa Mineira.” Perhaps the collection’s most affecting moment, though, arrives with album closer “Do You Know What It Means To Miss New Orleans?” Soft and breathy, it’s both a heartbroken lament and a tender embrace, a wistful sigh and a welcome home.

“I truly do know what it means to miss New Orleans,” Harper says. “I recorded that song within months of returning to town, and even though there was so much uncertainty in my life, I just felt so happy and blessed to be back.”

These days, there’s plenty of uncertainty to go around, but no matter what the future holds, Roderick Harper knows where he’s meant to be. And, as ‘Evolving’ ably demonstrates, he knows who he’s meant to be, as well.