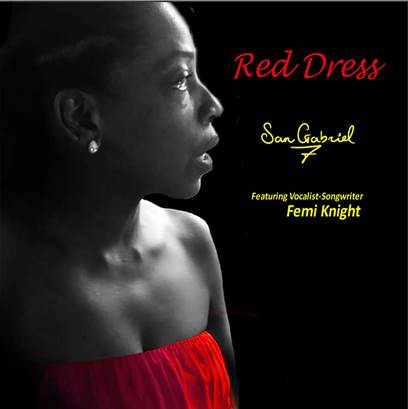 The SAN GABRIEL 7 is a group that has been flying under the radar for far too long. The band has been gigging around Southern California since its inception in 2006 and is now releasing RED DRESS, their tenth album. CHRIS GORDON, the album’s producer, says, “The group has grown and changed over the years, and we felt it was time to bring our music to a larger audience outside of the region.”

The musicians on RED DRESS each have a long list of professional credits playing with some of the biggest names in the music business. Their newest album features singer, songwriter, keyboardist, and voiceover actor FEMI KNIGHT, AKA Dawn Bishop. Knight is perhaps best known for her long association with Sergio Mendes. RED DRESS features seven songs composed by Knight and two live performances of Knight and the SG7 recorded at the Cal Tech Jazz Festival. There is real synergy between Dave Cushman’s fun and engaging arrangements and The San Gabriel 7, a high energy band of top-notch players. Knight has a smooth, flexible, and warm voice, and the music on RED DRESS is swinging and suffused with toe-tapping funkiness, aided and abetted by Knight’s intelligent, sensitive lyrics.