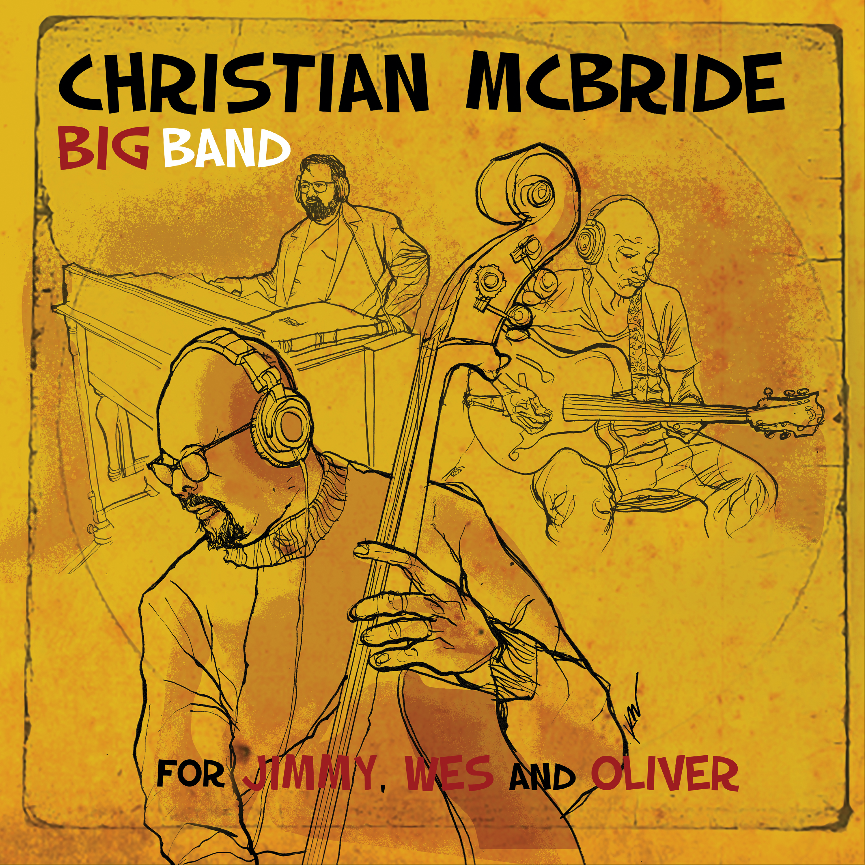 In September 1966, organist Jimmy Smith and guitarist Wes Montgomery got together at Rudy Van Gelder’s famed studio in Englewood Cliffs, New Jersey. Over the course of three days, the two jazz icons recorded the material for two now-classic albums: The Dynamic Duo (1966) and Further Adventures of Jimmy and Wes (1968), backed by a big band featuring arrangements by the great Oliver Nelson.

That pair of electrifying outings would prove seminal for another dynamic duo over the ensuing decades: bass great Christian McBride and master organist Joey DeFrancesco would wear out the grooves on their copies of the Smith/Montgomery summit meetings during their high school days, and both would remain touchstones throughout a friendship and collaboration that has lasted nearly 40 years. Now, the pair pay tribute with For Jimmy, Wes and Oliver, the third release by the GRAMMY® Award-winning Christian McBride Big Band.

Due for release on September 25 via Mack Avenue Records, For Jimmy, Wes and Oliver echoes the format of the original Smith/Montgomery summit meetings, with a balance of big band and quartet tracks. To complete the core band, McBride called on another longtime friend and collaborator, Mark Whitfield, to play the Montgomery role, while regular CMBB drummer Quincy Phillips anchors the ensemble.

“Joey is, without question, my oldest friend in music,” McBride says. “We met in middle school playing in the Settlement Music School Jazz Ensemble in Philadelphia. We’ve recorded a few things here and there over the years, but we’ve never recorded an entire album together until now. It seemed logical to salute the two albums that we listened to quite a bit as kids.”

The repertoire on For Jimmy, Wes and Oliver also follows from the Smith/Montgomery recordings, with four tracks reprised for the originals along with a mix of originals and standards that capture the same ebullient spirit. The celebratory tone is set with the rollicking classic “Night Train.” The familiar, window-rattling tune was part of The Dynamic Duo, but it’s been a constant in the books of many a bandleader who’s been influential to McBride and DeFrancesco, including Duke Ellington and James Brown.

Montgomery’s “Road Song” originally appeared on Further Adventures, and here allows both Whitfield and DeFrancesco to show off on captivating, exploratory solos, each brilliantly comping for the other and showing off their dynamic chemistry. “Milestones” is taken from the same album, and again allows the band to tip its collective hat not only to the album’s titular sources but to another giant who has played a key role in their musical lives: Miles Davis, who famously recruited DeFrancesco straight out of high school.

The classic spiritual “Down By the Riverside,” which opened The Dynamic Duo, is taken at a breakneck pace by the skilled band, lending the tune an even more raucous spirit than the Smith/Montgomery rendition. The last two pieces are originals: Whitfield contributed “Medgar Evers’ Blues,” a salute to the slain civil rights activist originally recorded on his 1990 debut, The Marksman. And “Pie Blues,” which closes the album on a soulful, down and dirty note, is built on a groove that McBride and DeFrancesco devised while still in high school together at Philadelphia’s High School for Creative And Performing Arts (CAPA), alongside classmates like Kurt Rosenwinkel and members of Boyz II Men and The Roots.

“There’s not really a melody, just a groove,” McBride explains. “As for the word ‘Pie,’ we’re not sure where that came from. We were just being silly. I know we sure ate a lot of pie back then!”

The band pares down to the quartet of McBride, DeFrancesco, Whitfield and Phillips for four tracks. The first is a lilting take on Freddie Hubbard favorite “Up Jumped Spring” highlighted by a nimble, singing turn by the bassist. Whitfield is at his most heartfelt on “The Very Thought of You,” with DeFrancesco’s cloud-like chords conjuring an airy atmosphere. All four rise to the sophisticated elegance of Billy Eckstine on their version of “I Want To Talk About You,” while DeFrancesco’s “Don Is,” a winking homage to bassist and Blue Note honcho Don Was, is buoyed by Phillips’ light-footed swing.

The 17-piece Christian McBride Big Band has become one of the most scintillating large ensembles on the modern jazz scene since its 2011 Mack Avenue debut, The Good Feeling. Both that album and its successor, 2017’s Bringin’ It, garnered GRAMMY® Awards in the Best Large Jazz Ensemble category. The stellar band has remained remarkably consistent throughout that history, a testament to the camaraderie and joyous vibe of McBride’s intensely swinging ensemble.