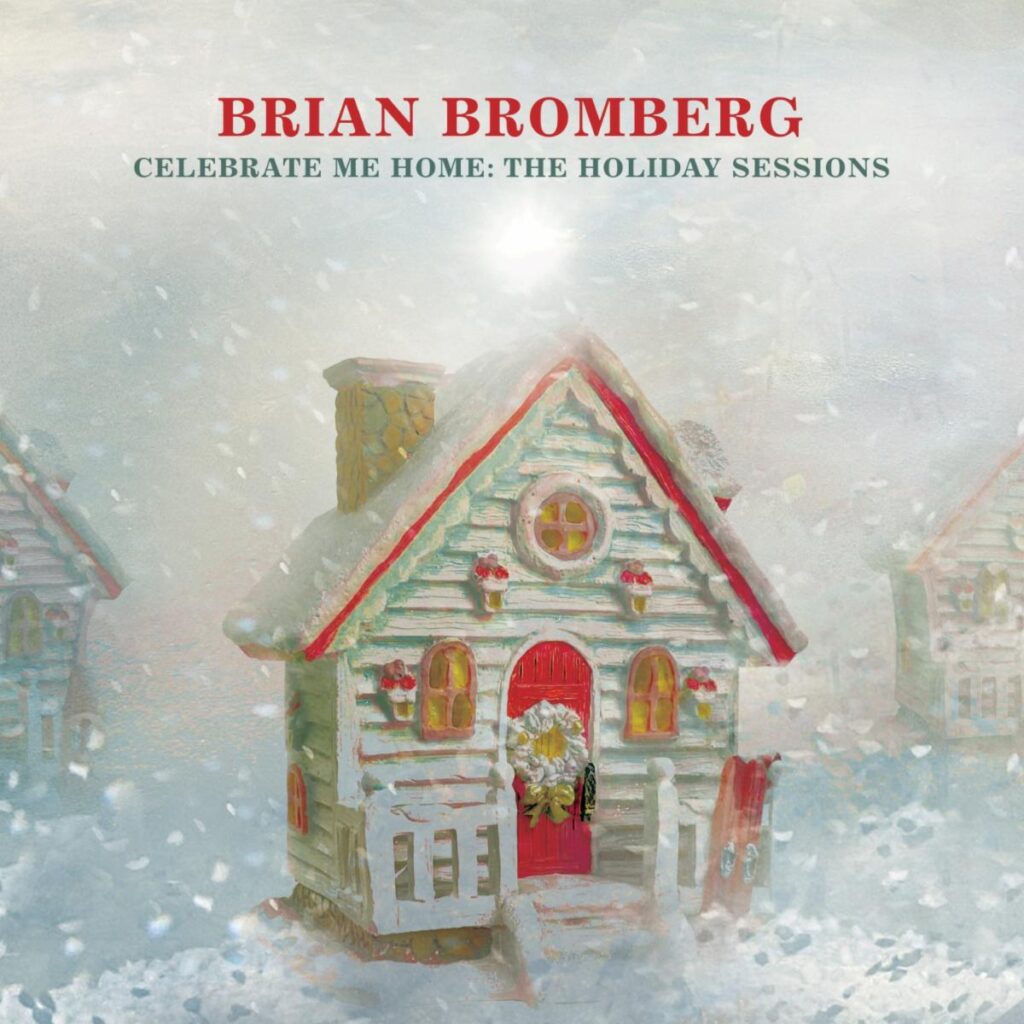 World-Renowned Bassist and Producer Brian Bromberg
Celebrates Being Home – and Nowhere Else – for the
Holidays with New Album, Recorded in Quarantine:
Celebrate Me Home: The Holiday Sessions

Album Features Eclectic Mix of Songs in a Wide Array of Styles,
with an All-Star Cast Including Najee, Everette Harp,
Maysa, Elan Trotman and Chris Walker

For a virtuoso jazz bassist and world-renowned producer, quarantined in his Southern California home during a global pandemic and contemplating an uncertain future, the holidays would seem to be the last thing on one’s mind. The chameleonic Brian Bromberg has never been one to follow the expected path, however. With live gigs cancelled and the opportunity for collaboration complicated by social distancing, Bromberg virtually assembled a stellar cohort of musicians to celebrate the most wonderful time of the year on Celebrate Me Home: The Holiday Sessions.

Available now on Artistry Music/Mack Avenue Music Group, Celebrate Me Home takes its title from the Kenny Loggins classic, co-written by Bob James, which feels all the more poignant given our current circumstances. Gorgeously expressed by vocalist Chris Walker, the song achingly captures the yearning for a return to familiar surroundings and loved ones that many of us are feeling right now, regardless of the season.

“It’s an incredible song, and it absolutely fits this moment,” Bromberg says, admitting that tackling beloved Christmas songs in isolation made for an unusual challenge. “We can’t go anywhere, we can’t do anything; we’re all stuck dreaming about all the things we’d rather be doing, the fun we’d love to be having, but we just can’t. So, we had to figure out how to create a vibe and an experience while we’re stuck in this weird place. On the flip side of that, I don’t think this record would have happened the way that it did had I not been in quarantine. This made it possible to take a dark place and turn it into a light place, which became my saving grace.”

The album’s joyous spirit belies the conditions under which it was created. The sessions were conducted piece by piece, with each musician contributing from their home studio, or in isolation at a studio of choice. To transcend those limitations, Bromberg invited an all-star roster of special guests: vocalists Walker and Maysa, saxophonists Everette Harp, Elan Trotman and Gary Meek, flutist Najee, guitarist Ramon Stagnaro and steel pan master Kareem Thompson. They join a remarkable band of longtime collaborators that includes keyboardist Tom Zink, guitarist Ray Fuller, saxophonist Andrew Neu, drummers Tony Moore and Joel Taylor, and percussionist Alex Acuña.

Longtime Bromberg fans have become familiar with the versatile bassist’s whiplash shifts in style and approach from one project to the next over the course of his four-decade career. His recordings span big band swing and smooth jazz, Latin rhythms and tender balladry, raucous funk and blistering rock (the holiday album’s release, in fact, coincides with the remixed and remastered reissue of his 2012 album Bromberg Plays Hendrix, a muscular tribute to the late rock icon). But Celebrate Me Home brings Bromberg’s many facets together for a musical holiday party where jazz mingles with calypso and R&B meets swing under the mistletoe.

That stylistic diversity is in keeping with the eclectic choice of material on the album, which includes many of the expected Yuletide classics (“The Christmas Song,” “Deck the Halls”) but also such pop hits as Donny Hathaway’s “This Christmas” and Paul McCartney’s “Wonderful Christmastime,” José Feliciano’s “Feliz Navidad,” a smash hit that is rarely reprised, and a pair of heartfelt original compositions.

Bromberg is the first to admit that the idea of recording a Christmas album had never crossed his mind. He had contributed to other artists’ Christmas albums, including projects by David Benoit and Brian Culbertson, and knew that radio was always hungry for new songs of the season as the end of the year came into sight. He was also urged to get into the spirit by his fiancée and her best friend, so eventually gave in and recorded a finger-snapping swing rendition of “Let It Snow,” featuring a duet between Walker and Maysa. “It was so much fun,” Bromberg says, “I decided to take this more seriously. It allowed me to be creative and jump into Latin jazz, big band jazz, swinging straight-ahead jazz, funky stuff and R&B jams, all on one record and get away with it.”

A smooth, soulful version of “This Christmas” opens the album, with Bromberg playing the silky melody on nylon-string piccolo bass. McCartney’s polarizing “Wonderful Christmastime” follows, with Bromberg tipping his Santa cap to the ex-Beatle’s legacy with an homage to “All You Need Is Love” in Andrew Neu’s horn arrangement. The entrance of sleigh bells segues into the wintry landscape of Bromberg’s first original, the warmly embracing “Let’s Go On a Sleigh Ride!”

The open fire roasts more than chestnuts on a romantic reimagining of “The Christmas Song,” while Bromberg gives “Jingle Bells” a cultural twist as a medley with “Dreidel, Dreidel, Dreidel,” along with the Barbados-born Trotman and Thompson’s steel pans transforming both songs into a tropical calypso culminating at the end in “St. Thomas.” Bromberg shows off his impressive drum skills as he sets the pace for a brisk, swinging hybrid of “Deck the Halls” and “God Rest Ye Merry Gentlemen” before slowing things down for the original ballad “Holidays Without You.” Stagnaro and Acuña add a Latin feel to “The Most Wonderful Time of the Year” and “Feliz Navidad,” while Bromberg’s acoustic bass and Neu’s baritone sax stand in for Thurl Ravenscroft’s snarl on “You’re a Mean One, Mr. Grinch.”

For all of the improbabilities facing its creation, Celebrate Me Home ended up being a lively and deeply felt project of which Bromberg is deservedly proud. “The one thing that I hope people will hear on the record is honesty,” he concludes. “I really think you can hear that we’re all having fun and that my heart was in it, 100 percent.”