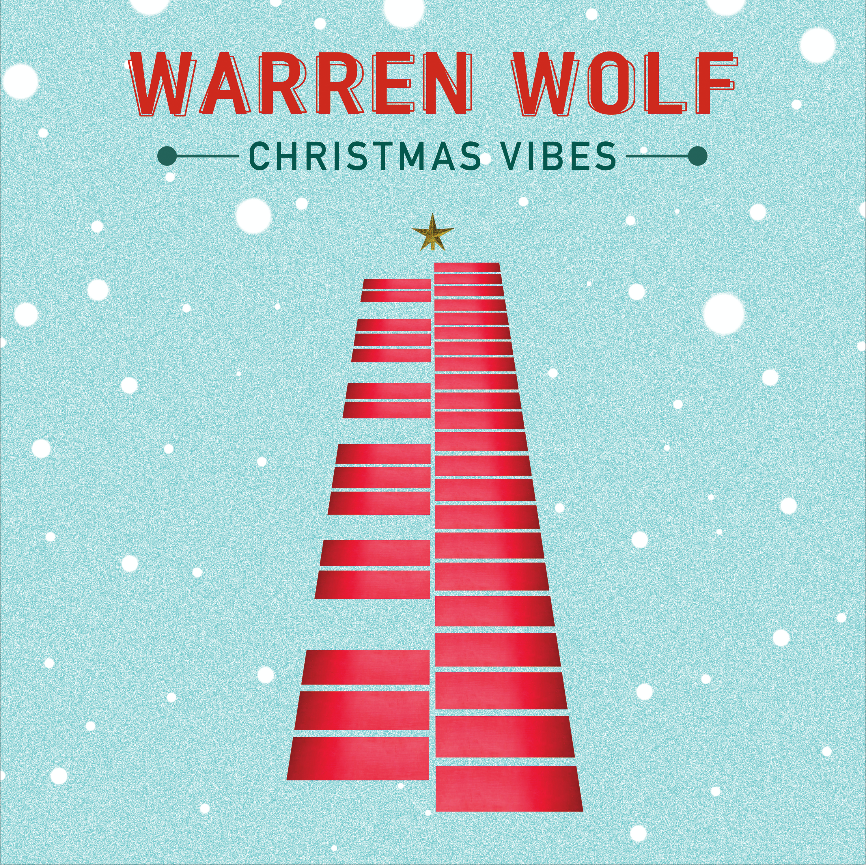 Christmas Vibes, due out September 18 on
Mack Avenue Records, Features Classic Carols,
Offbeat Pop Songs and an Original Addition
to the Christmas Canon

There’s no shortage of Christmas music out there that can evoke the holiday spirit. But it takes a master of groove and swing like Warren Wolf to conjure a true feeling of Christmas Vibes. On his new album, the vibraphone great and father of five offers an album of jazzy Yuletide cheer sure to provide the ideal soundtrack to the season for the hippest families on the block.

Due out September 18 via Mack Avenue Records, Christmas Vibes presents Wolf’s interpretation of some perennial favorites (“O Christmas Tree,” “Winter Wonderland”) alongside left-field choices (“Happy Xmas (War Is Over),” “You’re a Mean One, Mr. Grinch”) and a new original song that captures the loving but hectic atmosphere of the Wolf house at Christmas. Carrying on in the R&B and gospel-tinged style of Wolf’s most recent Mack Avenue release, Reincarnation, the album offers a unique, soulful twist on Christmas caroling.

Asked why he decided to record an album of Christmas songs, Wolf laughs as he offers a two-word answer: “peer pressure.” Not that he was under any professional pressure – in fact, he approached Mack Avenue with the idea. The label had previously featured the vibist on its all-star 2014 collection, It’s Christmas on Mack Avenue, where he guested with the Aaron Diehl Trio on Vince Guaraldi’s “Christmas Time Is Here,” provided narration for “Santa Claus, Go Straight To the Ghetto,” and performed a stunning rendition of “Carol of the Bells” on the vibes.

The idea is a gift for the audience members who’ve long requested a Christmas collection based on the bell-like beauty of the vibes, and – perhaps most importantly – a peace offering to the frequent requests of his mother-in-law. “She and my wife are avid Christmas lovers,” Wolf says. “They just love everything that has to do with the holiday, from the music to the decorations to the presents. Plus, I have two younger children, four and six years old, so it seemed like the perfect time.”

Another impetus was an invitation from the intimate Baltimore concert venue Jazzway 6004 to headline its annual Christmas show in 2019. Saxophonist Tim Warfield traditionally performs that role, but when a conflict arose Wolf was happy to step in. “I thought it would just be a one-time thing, but the concert came off really well,” Wolf recalls. “I’d written all this music, so why not record it?”

Wolf takes an even more prominent role than usual on Christmas Vibes, playing all the piano and keyboard parts as well as spotlighting his usual virtuosity on the vibes. In part, it was the outcome of necessity: the album was recorded in mid-March, just as much of the country was beginning to shut down due to the COVID-19 pandemic, necessitating some last-minute changes of plan. But it also gave the leader a long-overdue opportunity to showcase his multifarious talents.

In enlisting the rest of the ensemble for the album, the native Baltimorean stuck with the family dynamic so central to the Christmas spirit, enlisting musicians from the “DMV” area – D.C., Maryland and Virginia. “I always like to introduce new people to the world,” he explains. “I’ve never understood why people feel the need to use the same all-stars on every record when there are so many other talented people in this area.”

Drummer Carroll “CV” Dashiell III – like Wolf, a second-generation musician – reprises his role from Reincarnation. Strongly rooted in the church, he’s also a rising star on the Washington D.C. jazz scene. He shares the rhythm section with bassist Jeff Reed, a mainstay of the Baltimore jazz scene. “There aren’t too many drummers like CV, who can easily go back and forth between playing swing and playing pocket,” Wolf enthuses. “Along the same lines, Jeff is one of the few bassists I know who has an equally good feel on electric and upright bass. They make a great team.”

Three vocalists join the party at various points. Micah Thomas is a gifted Baltimore vocalist who moves between the worlds of jazz, R&B and gospel. Here he brings a classic cool to the ultimate Christmas diss track, “You’re a Mean One, Mr. Grinch,” and a supple soul to Donny Hathaway’s “This Christmas.”

Allison Bordlemay is an award-winning singer and vocal coach who has been friends with Wolf since their student days together at Berklee College of Music in Boston. She reunited with the vibraphonist to sing John Lennon’s uncharacteristically optimistic “Happy Xmas (War Is Over)” as well as Wolf’s newly-composed “Wake Up Little Kids, It’s Christmas.” The latter also features background vocals by Christie Dashiell, sister of CV, whose voice has graced projects led by Marcus Strickland and Helen Sung and been featured with Howard University’s famed Afro Blue jazz choir, who takes the lead role in duet with Wolf’s tender piano on the gospel classic “Sweet Little Jesus Boy.”

In making his own contribution to the Christmas song tradition, Wolf decided to again stick close to home and family. “The night before Christmas at my house is always hectic,” he says. “My kids like to stay up late, playing and running around, yelling that Santa Claus is coming in the morning. They don’t go to bed until 10 or 11 o’clock, and then my wife, her best friend and I stay downstairs wrapping presents for the next two or three hours. Then first thing in the morning my kids go nuts all over again, jumping all over everybody. Let’s just say we wake up to lots of love.”

That experience remains something of a unique one for Wolf, who grew up in family that didn’t celebrate many of the trappings of Christmas – no tree in the house or stockings by the fireplace. He enjoyed the season vicariously, through visits to extended family or caroling at school. One tradition he did look forward to every year was the annual broadcast of A Charlie Brown Christmas, with its melancholy jazz soundtrack by Vince Guaraldi. Two of those pieces show up here: “Christmas Time Is Here” and “Skating.” The album also features a number of reimagined classics, from a swinging “O Christmas Tree” through a glistening “Do You Hear What I Hear?” to a blazing “Sleigh Ride.”

So whether you’re wrapping gifts on Christmas Eve, drinking eggnog around the tree, or scouring the web for shopping deals, Christmas Vibes provides more than good cheer and glad tidings – it sets the vibe for a happy holiday.