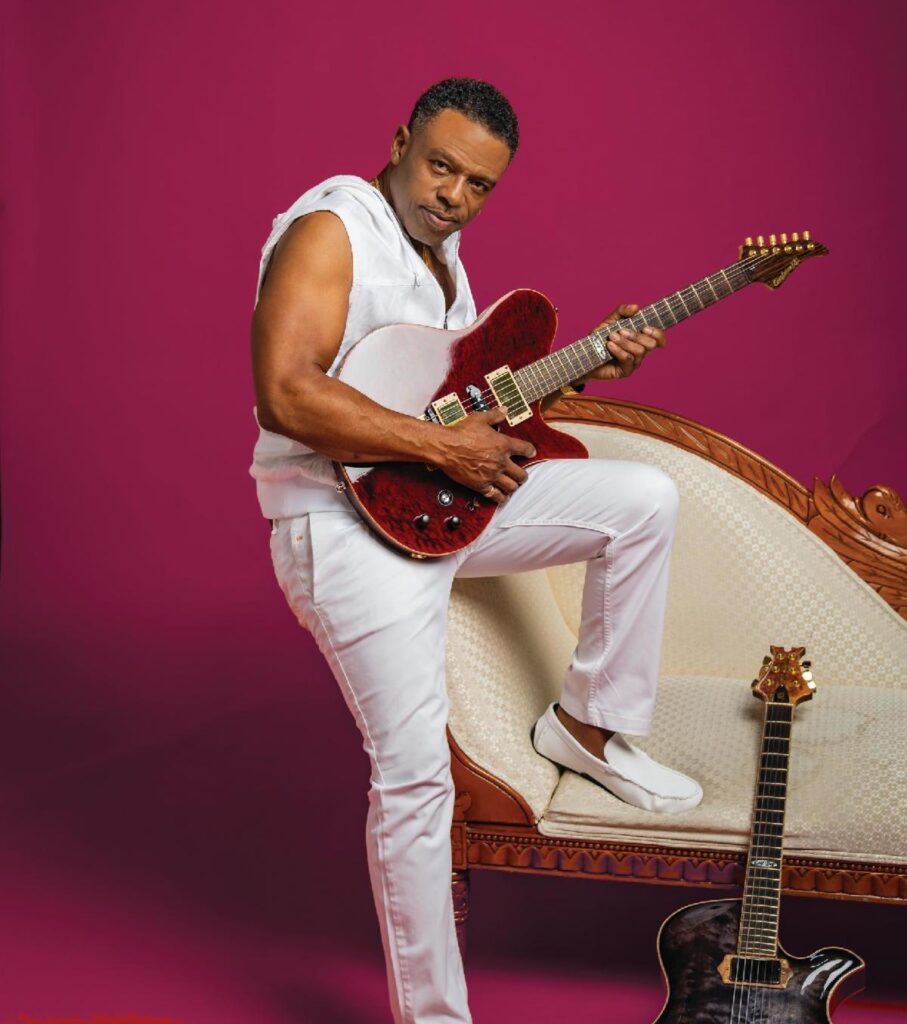 “I wrote and recorded Heart To Heart as a message to my fellow Beings to remember that the essential quality of our nature was made divine, as one race, governed by one world. We must abandon the perception that we are made to exist independently, therefore, not unified, divided by selfishness, creating greed to fulfill our quest for survival,” explains the multi-platinum selling, chart-topping and Grammy award-winning guitarist Norman Brown. Norman whose love affair with the guitar began at age eight was dubbed by George Benson as “one of the greatest and most articulate guitarists out there.” Brown’s charisma and versatility has afforded him the opportunity to collaborate with a cross-section of Jazz and R&B stars including George Benson, Brian McKnight, Kirk Whalum, Jeff Lorber, Miki Howard, Gerald Albright, Rick Braun, Peabo Bryson, and Chanté Moore, to name a few. At a time where there is so much divisiveness, Norman Brown asks each of us to search within to recognize our own divine light and to receive the divine wisdom that surrounds us every day. “All of us are made from the same source making us interconnected, interrelated and therefore interdependent,” shares the Atlanta based musician. “We have to exchange love, Heart To Heart in order to achieve world salvation and loving peace on earth.” At the core of Brown’s work based on the principles of universal law, wisdom from the Ancient Egyptian Spiritual System “The Paut Neteru Of Anu,” The Tree of Life which focuses on peace, truth, balance, order, harmony, morality and justice. Brown’s spiritual way of being is undoubtedly an attribute that has endeared him to an ever-growing and devoted fan-base. He affectionately calls his fans Normantics!

On August 7, 2020, Shanachie Entertainment will release Heart To Heart, Norman Brown’s 12th recording as a leader and third for the label. Shanachie Entertainment VP of Jazz A&R, Danny Weiss, states, “At the risk of being blasphemous, Norman is the true successor to Wes Montgomery and George Benson. Like them, he’s a jazz musician of the highest order, but you hardly notice because you’re having so much fun listening to him.” Heart To Heart is a gorgeous collection of originals composed by Brown and various album personnel, that fuse the best elements of Jazz, R&B, Pop, Blues and beyond. It is a soul-stirring and heart-warming journey fitting for this time of uncertainly. The introspective guitarist says, “We have been given the golden opportunity of having the Earth stop. We all have wanted to stop the grind and catch our breath, refresh our thoughts and learn something new. This halting of everything is really the silver lining and an opportunity to find our ‘Master Key’ to the rich quality this life blesses us to experience.”

Heart to Heart is an all-star affair that affirms the adoration and respect that Norman Brown holds amongst his peers. Great bandleaders are like chemists. They go into the laboratory and utilize all the right elements in order achieve the desired outcome. It is knowledge and cooperation working in the highest order. With this dynamic in mind, Brown assembled an enviable collective of creative spirits to bring to life Heart To Heart. Brown’s special formula follows the golden rule. “What I do to you, I in turn do to myself,” explains Norman. “Let’s take care of each other through the acknowledgement that we must treat one another in joyful peace and with acts of giving unconditional love.” Heart To Heart joins Brown with guitarists Peter White and Paul Brown, keyboardists Jeff Lorber, Chris “Big Dog” Davis, Gregg Karukus, Phil Davis, Lew Laing and Jeff Carruthers, bassist Roberto Vally, Tres Gilbert, Lee Thornberg, Sean Michael Ray and Nate Kearny, drummers Lil’ John Roberts, Gary Novak, Sonny Emory and Teddy Campbell, saxophonists David Mann and Greg Vail and percussionist Lenny Castro. Brown shares that each individual played a significant role in bringing the album to fruition. “It was an honor and pleasure to be joined by all of these divine beings who nourished the music and brought the perfect seasoning to this album.”

My Dad loved Wes (Montgomery) and inspired me to learn that style by allowing me to have the car on Saturday night if I learned his favorite Wes tunes like ‘Bumping On Sunset’ and ‘Down Here On The Ground.’ Frankly I would have learned them based on my own love of his playing. His technique, beautiful chord soloing and his signature octave expression was wonderfully original and innovative.” – Norman Brown

Heart to Heart opens with the recording’s first single “Heading Wes,” a tribute to Brown’s father as well as the iconic guitar hero Wes Montgomery, who transformed the language of guitar harmonically, melodically and technically. “My Dad loved Wes and inspired me to learn that style by allowing me to have the car on Saturday night if I learned his favorite Wes tunes like ‘Bumping On Sunset’ and ‘Down Here On The Ground,’ recalls Norman. “Frankly I would have learned them based on my own love of his playing. His technique, beautiful chord soloing and his signature octave expression was wonderfully original and innovative.” The intoxicating sway and melodic beauty of the album’s title track features fellow guitarist Peter White, who Brown refers to as “a joyously gentle journeyman.” Brown shifts gears for the euphoric up-tempo and smoking “Unconditional,” highlighting and penned by keyboardist Jeff Lorber whose energetic creativity Brown says is “perpetually gifting us timeless ideas.” Another standout on the album is the moving and devotional gem “Amen” co-written with hit making producers Vassel Bedford and Chris “Big Dog” Davis (who is featured on keys). Norman by the way returns the favor and appears on Davis’ new Shanachie release Focus.

Heart To Heart showcases the genius and flair that has landed Norman Brown at the top of the charts time and time again on the finger snapping “Just Groovin.” Norman wrote the song with fellow guitarists Paul Brown and Jeff Caruthers, who both join him on the composition. The beautiful “Brighter My Light Shines,” co-written with keyboardist Phil Davis, is the perfect example of the timeless anthems Brown is known for. He wrote the latter with keyboardist Phil Davis who is also showcased on the memorable tune. The radiant grace and sweetness of this song kisses you every note. David Mann offers a gritty horn arrangement to the funky “She’s Mine” which shines a spotlight on Brown’s agile blues chops and sharp-witted hooks. Brown’s crisp articulation and funk-laced lines take center stage on “I Miss Your Groove,” offering another view of the blues that will have you saying “Mercy, Mercy, Mercy!” Norman conjures up a dipping bronze sun, disappearing behind a crimson sunset while the salted air gently caress your cheeks on “Ocean Breeze,” co written by Jeff Lorber. The guitarist also urges us to “Keep The Faith” with the forward momentum groove of his stunning original. “Faith is the substance of things not yet seen but the evidence of things to come. Part of this energy aids in the law of attraction,” declares the guitarist. A reward to taking the journey on Heart To Heart is the surprise ethereal and rock-tinged track “Outside The Norm,” featuring the keys of Phil Davis and drums of Lil’ John Roberts. But then again, not a surprise from a man who can play it all!

Watching his older brother play, Norman was stopped by the energy radiating from the musical sound of what he now calls his “Spirit Catcher,” the stings on his guitar. Waiting for his brother “Popsicle” to leave, Norman couldn’t wait to get his hands on his brother’s six string carefully stored in the closet. Influenced early on by Jimi Hendrix and the Isley Brothers, it was not long before Brown was drawn in by one of his father’s favorite guitarists, Wes Montgomery. A graduate of the Musician’s Institute in North Hollywood, where Brown would go on to teach, the guitarist landed his first deal, as the flagship artist debuting his career and launching Motown’s Mojazz label. In 1992, he recorded the albums Just Between Us, the Gold selling, Soul Train award winning After The Storm and Better Days Ahead. Having recorded a string of successful albums including 1999’s Celebration (in which he teamed up with Paul Brown), 2002’s Just Chillin’ (featuring vocalists Michael McDonald, Miki Howard and Chanté Moore) scored a Grammy win. The same year, Brown joined forces with saxophonist Kirk Whalum and trumpeter Rick Braun forming the group BWB, recording their debut album Groovin’. In 2013 they released Human Nature, a tribute album to Michael Jackson, that was followed by their third collaboration BWB in 2016. Brown continued a trail of critically heralded albums including West Coast Coolin’ (2004), Stay With Me (2007), Sending My Love (2010) and Grammy nominated 24/7 with saxophonist Gerald Albright. 2017 saw the release of Norman Brown’s anticipated and well-received Shanachie debut, Let It Go and The Highest Act Of Love followed in 2019.

Brown concludes, “Heart To Heart is the greatest power we can harness. This dialogue empowers each person in the entire world to win! It’s all about the power generated from learning the lessons of spiritual growth that helps us to achieve the goal of evolution which is the enjoyment of life.” Brown’s new recording is vital listening for our current times. Its message rings loud and clear and is a reminder that even though we may be “socially distance” we are indeed together and need one another now more than ever.