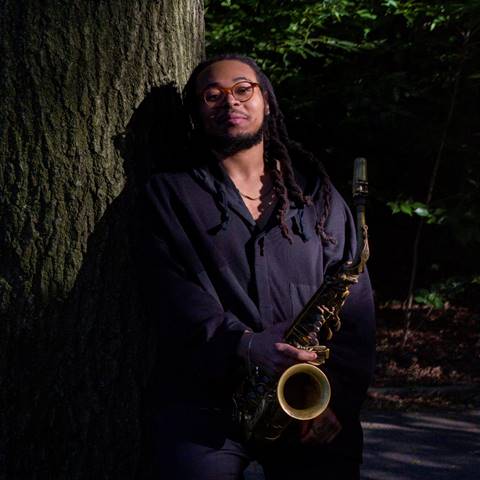 Alto saxophonist and composer Immanuel Wilkins has released “Grace and Mercy,” the uplifting second single to be revealed from his forthcoming debut album Omega, which was produced by Jason Moran and will be released August 7 on Blue Note Records. “‘Grace and Mercy’ is about how God has shown me favor throughout my life, given me forgiveness, and mercy,” says Wilkins. “I’m continuously striving to gain more compassion, empathy, forgiveness and humility.”

Wilkins, who made a striking appearance on vibraphonist Joel Ross’ 2019 Blue Note debut KingMaker, delivers an expansive opus about the Black experience on Omega. With powerful pieces like “Mary Turner – An American Tradition” and “Ferguson – An American Tradition,” Wilkins wanted to convey the deep pain his people have endured in this country for centuries. That message lands harder in 2020 as cities across America are uprising due to the killings of George Floyd, Breonna Taylor, and Ahmaud Arbery, three unarmed Black people who died at the hands of whites.

Immanuel Wilkins, 22, grew up in Upper Darby, Pennsylvania, just outside of Philadelphia. After he graduated high school, Wilkins moved to New York City in 2015 to attend The Juilliard School. In the city, he met trumpeter and composer Ambrose Akinmusire, who mentored Wilkins and helped him navigate the jazz scene. He also met a musician who would change his professional life, Jason Moran, the prominent pianist and composer who took the young saxophonist on tour. In what was one of Wilkins’ biggest gigs to date, he played alto in Moran’s “In My Mind: Monk at Town Hall, 1959,” a series of live performances honoring the great legacy of jazz pianist Thelonious Monk. Wilkins has since worked with a diverse range of artists including Solange Knowles, Gretchen Parlato, Wynton Marsalis, Gerald Clayton, Aaron Parks, and Joel Ross.