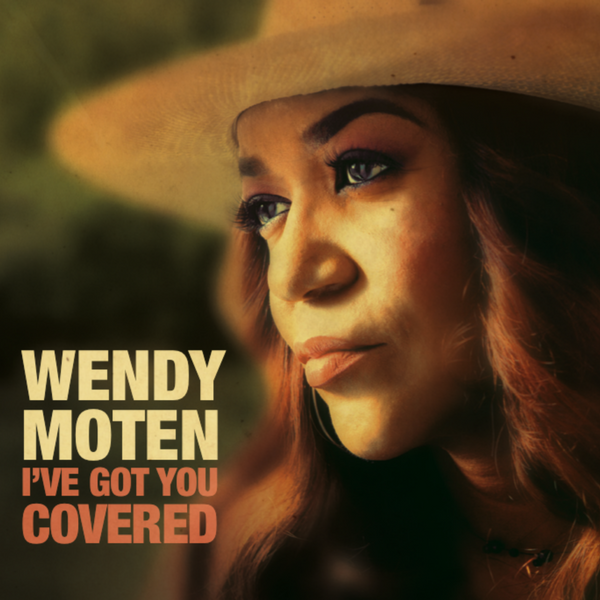 Wendy Moten may have launched her career as a pop/R&B artist and taken cool detours into jazz throughout her fascinating career, but her heart clearly belongs to Nashville. Living and immersing in Music City for the past 23 years, the multi-talented vocalist has toured with Faith Hill & Tim McGraw (2005-2018) and Martina McBride (2014-2016) – and since 2016, has been on the road with the legendary Vince Gill (the man she calls “Emperor of Nashville”) when he hasn’t been touring with the Eagles. Their dynamic working relationship, and the 21-time Grammy winner’s long-held appreciation for Wendy’s versatility, culminates now in I’ve Got You Covered, an extraordinary passion project she’s had in her sights for years.

Produced by Gill and featuring the elite among Nashville’s most legendary hit making session musicians, the nine-track collection is the singer’s long-awaited moment in the country music spotlight. Effortlessly and intuitively inhabiting classic but lately little heard songs hand-picked by Gill, Wendy finds her groove – and her spiritual musical home – celebrating the gloried history of traditional country music by singing what she calls “real stories and real songs.”

She brings fresh relevance to tunes from the 60’s and 70’s by Ernest Tubb (“Driving Nails in My Coffin”), Jeannie Seely (“Don’t Touch Me”), Bobby Gentry (“Ode to Billie Joe”), George Jones (“Walk Through This World With Me”), Jeff & Sheri Easter (“Going Away Party”), Dolly Parton & Porter Wagoner (“Each Season Changes You”), Tammy Wynette (“Til I Get It Right”) and Webb Pierce and Mel Tills (“I Ain’t Never”). Wendy and Gill also share a beautiful duet re-imagining of the Linda Ronstadt heartbreaker “Faithless Love.” The two had previously paired for “True Love” on the 2018 all-star compilation Muscle Shoals: Small Town, Big Sound.

When Wendy joined Gill’s band, the first person she told about her dream to record a country album was Paul Franklin, one of the most recorded pedal steel guitarists in history. Franklin casually mentioned it to Gill, piquing his interest and prompting Gill to invite Wendy over to his home for discussions that led to a commitment to produce the sessions that evolved into I’ve Got You Covered. In addition to Franklin, the project features stalwarts Willie Weeks (bass), Richard Bennett (guitar), Fred Eltringham (drums), Charlie Judge (strings), Jeff Taylor (accordion) and the horn section of saxphonists Mark Douthitand Doug Moffett, trombonist Barry Green and trumpeter Mike Hayes.

“Vince set dates to record the project a few months after we first talked about it,” Wendy says. “Though we discussed some material during that first meeting, he surprised me by choosing completely different songs for me and the band to do on the actual days of the session. I knew the band guys, having played on countless hits over the years, were up for that, and I was determined to not be the weakest link and rise to the challenge. Vince was glad I didn’t know the songs because this ensured they would sound spontaneous and fresh. He wanted me to jump right in.

“I read the lyrics, made notes, listened to each original version twice and then it was up to me to make each song my own,” On the plus side, doing them on the fly meant I wouldn’t over think them and try to be too perfect. It was my time to own this style, and Vince and this iconic band were relieved and happy h with my delievery. I thought, this is what Ella Fitzgerald must have felt like when she was in a room with the greatest musicians of her era. Just as they knew she could bring the goods, this band respected me. Listening back, I realized that every song Vince chose that day was the right one for me. It’s like we opened to what the universe brought and let it flow.”

In addition to touring with major artists, Wendy set the stage for her emergence as a bona fide country artist with numerous liveperformances in Music City over the past few years. She made her debut at the Grand Ole Opry in April 2019 and played threemore times there before a showcase at 3rd & Lindsley, one of Nashville’s premier live venues, for the release of I’ve Got You Covered in February 2020. During this time, she also headlined on the Opry stage at the Bonnaroo Music Festival. In 2018 and 2019, Wendy was a featured artist in the Country Music Hall of Fame Museum’s Musician’s Spotlight series. Last year, Gill invited her to become a the 11th member of the Grammy award winning western swing band The Time Jumpers – a institution launched by the town’s top studio musicians in 1998 – at theirweekly sold-out shows at 3rd & Lindsley in Nashville. In the fall, no less than James Taylor. Brian May and Steve Lukather (Toto) showed up on different nights because of the bands amazing reputation.

Known affectionately in various industry circles as “The Voice,” the multi-talented Memphis born performer launched her career with a self-titled 1992 EMI album that included the ballad “Come In Out Of The Rain,” which reached the Top 5 on the Billboard Adult Contemporary chart and later hit the Top Ten on the UK singles chart. The singer opened for Michael Bolton on his North American stadium tours and became popular in Japan when she performed sold-out concerts at the famed Budokan, hosted by David Foster. After several more well received albums (including one produced by Foster), Wendy diversified and launched a new phase of her career recording guest duets with Michael McDonald (“No Love To Be Found”), Kirk Whalum(“All I Do”), Peabo Bryson (“My Gift Is You”), Larry Carlton (“I Still Believe”) and Julio Iglesias (“Just Walk Away”), the latter whom she toured with for over 15 years. Moten’s most recent album prior to I’ve Got You Covered was a contemporary jazz set titled Timeless: Wendy Moten Sings Richard Whiting.