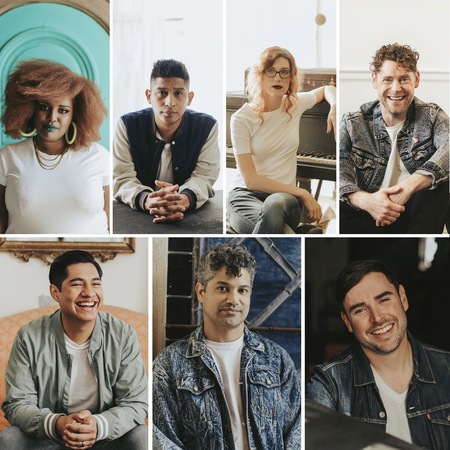 The Suffers Release Powerful Plea
“Take Me To The Good Times”

June 24, 2020: Today, The eight-piece Houston-based soul, funk and R&B group The Suffers return with a soulful plea to “Take Me To The Good Times.” The single is their first since the release of their acclaimed 2018 album Everything Here.

“A little over two months ago, life as we knew it came to a halt. Our tours were cancelled, and the world as we knew it changed,” explains Kam Franklin. “As a band, we honestly thought that last year would be the hardest we’ve ever had to push through. It brought us the loss of our two founding members, our trailer, and 40k worth of instruments getting stolen, on top of all the other ups and downs life has to offer. Through all of that, we chose to enter the recording studio last fall with our head held high, knowing that bigger things were on the horizon. This song is a reward to us for the hard work we put in, but it also serves as a love letter to the road, while offering a promise to return back to it. I only had time to shout out just a few of the cities we can’t wait to visit or go back to, but I could have kept going and going. The last 5 years of touring have taken us to some of the most incredible places. We put a lot of love into this one, and we hope that love is felt as it comes through your speakers. We love you, and we can’t wait to come back and play in your city.”

“While releasing music during the current state of the world feels strange, it’s absolutely necessary. To us, Black Lives have always mattered, but as the rest of the world begins to learn and understand this, we will continue doing what we do best. Leading, listening, and creating with love. June is black music month. June is when we celebrate Juneteenth, and after sharing this song with all you, June will hold yet another special memory for us. A memory where we pushed through it all to deliver a little piece of joy to the masses. We encourage you to donate to this list of Black trans-led organizations compiled by Brittany Packnett Cunningham.”