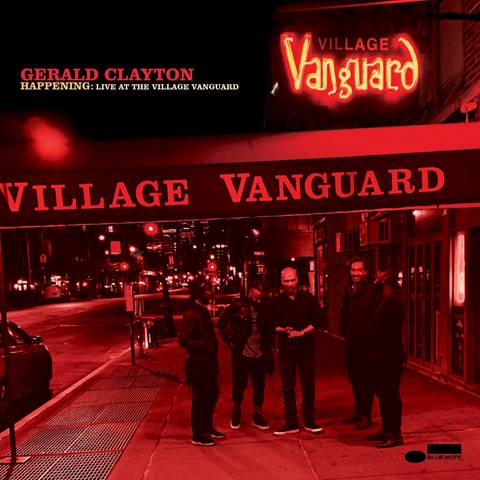 Pianist Gerald Clayton is set to release his Blue Note Records debut Happening: Live at the Village Vanguard on July 10. Recorded at the legendary NYC jazz club with a quintet of longtime collaborators—Logan Richardson on alto saxophone, Walter Smith III on tenor saxophone, Joe Sanders on bass, and Marcus Gilmore on drums—Happening spotlights Clayton’s layered identity as a leader. The quintet co-navigates four of Clayton’s original compositions including “Rejuvenation Agenda,” which is available to stream or download today, as well as Duke Ellington’s “Take the Coltrane.” Trio takes of Bud Powell’s “Celia” and the standard “Body and Soul” cast a mood that lingers long after the record ends.

“I think the live setting is the most honest testament to what it is we do all year round,” Clayton says. “I called it Happening to highlight the fact that this music is living, that we have a whole lot of happenings throughout the year, and performances at the Village Vanguard are some of the most special of those happenings. It’s such a special, sacred place for the music. You really can feel the presence of what’s occurred in the room.”

To Clayton, the album’s poised impact has shifted in light of the global pandemic. “The idea of having a recording of a live concert takes on a new meaning now that we’re unable to actually gather anymore” he says. “I would hope that, when we do return to some kind of normalcy, people are more inspired than ever to recognize that this music is happening, that it’s a living art form. We need to actually go to those shows. We need to be in those rooms and be part of that experience. I hope this album can offer people a little bit of an escape from this isolation, that it transports them back to the time when we were all able to congregate and celebrate our shared love.”