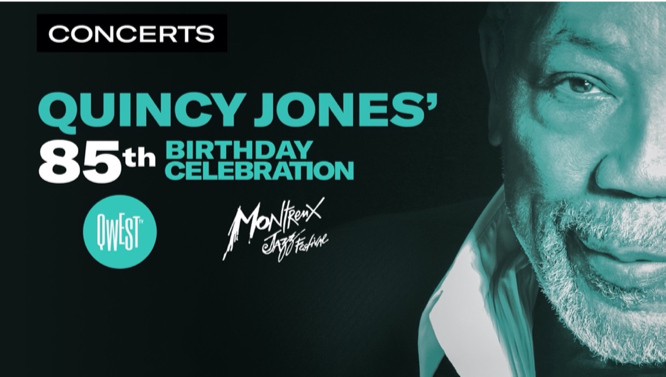 To enable and encourage jazz and related music discovery during this challenging time, Qwest TV by Quincy Jones, the world’s first subscription video-on-demand platform dedicated to Jazz and Beyond, is offering new users one-month of free access to its platform and entire content catalog, available until further notice.

“We want to offer music lovers the opportunity to be entertained and replace their concert outings with dedicated programs during this time of global quarantine,” says Ackbaraly.

Founded by music legend Quincy Jones in collaboration with French jazz impresario and television producer Reza Ackbaraly, Qwest TV has seen a 30% increase in content engagement over the past two weeks.

“We have also included a ‘DONATE’ button on our Facebook page for each concert that enables viewers to support the non-profit organization MusiCares, which helps which helps music creators and professionals while all events are cancelled,” adds Ackbaraly.

Cheick Tidiane Seck, a collaborator of Gorillaz and Salif Keita, Sylvain Luc, who shared the stage with Michel Jonasz and Michel Legrand and the Senegalese bassist Alune Wade have already participated this week.

During the entire quarantine period, Qwest TV also broadcasts a flagship program from its catalog every day at 9pm (CET) / 3pm (EST), available from the platform’s Facebook and YouTube accounts. Among the Qwest TV gems, Internet users will discover next week: