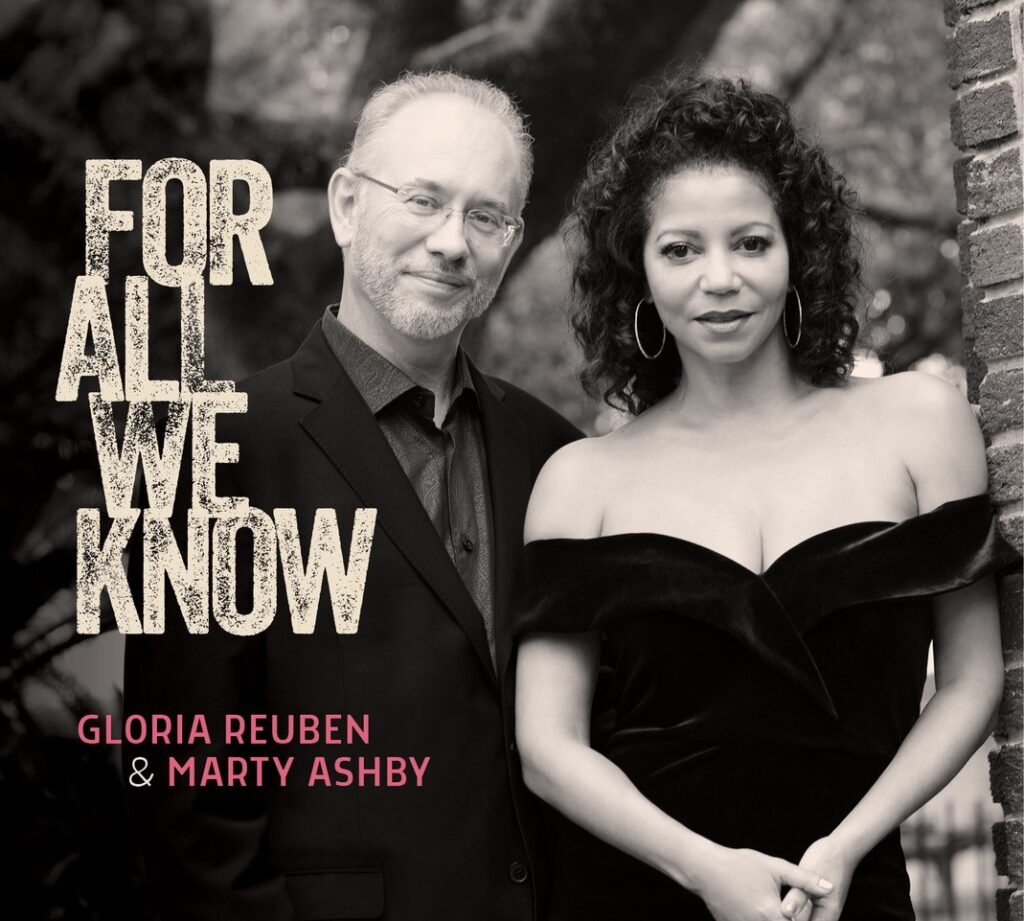 GLORIA REUBEN AND MARTY ASHBY
FOR ALL WE KNOW
AVAILABLE FEBRUARY 14, 2020

Gloria Reuben and Marty Ashby perform a collection of tunes, intimately exploring the beautiful, sometimes painful, oftentimes mystifying nature of love and relationships. All of the songs on For All We Know due for release on February 14, 2020 on the MCG Jazz recording label, carry the listener through the myriad of emotions that entwines the heart while one wishes for a love, wins a love or loses a love.

The song titles alone tell a powerful story that contains a message, a memory or a desire that anyone who has ever been in a relationship can connect with:

Where do you start to unwind the intertwined lives after a love affair ends? How do you not obsess about the people that you never get to love? Hoping that maybe your ex will be there just around the corner and come back into your life. You try a hand at your own recovery by telling yourself to, “sing my heart” and that “I get along without you very well.” Then you close your eyes and dream you find a time for love again and contemplate how high the moon is as visualization of your capacity to love. Yet, time after time you keep coming back to wanting love and loving the love you have. And for all we know today may be the last time you ever see your lover – or the day you meet your soulmate.

Reuben’s first recording on the MCG Jazz label “Perchance to Dream” was heralded by Dave Koz as “A truly beautiful album from start to finish…amazing playing by phenomenal musicians, great selection of material…but it’s Gloria’s elegant, refined voice that holds the listener. So intimate and present, she’s able to paint amazing pictures with her interpretations for these classic songs.” The recording ended with a duo track that sparked the notion for a full album of duos. Inspired by the albums of Sammy Davis, Jr. with Mundell Lowe and with Laurindo Almienda, and Ella Fitzgerald and Joe Pass, Gloria and Marty are adding to the voice/guitar duo cannon with this special project.

Gloria says, “I am so proud of my first music collaboration with Marty Ashby and my first jazz-based album, ‘Perchance to Dream,’ and I am thrilled to join forces with him again on ‘For All We Know.’”

Gloria Reuben is an actress and singer whose credits span television, film, theater and countless music performances. Gloria began playing classical piano at the age of five. Music has been a mainstay in her life ever since. One of the biggest moments in her music career was being a back-up singer for Tina Tuner in Ms. Turner’s 2000 tour “24/7,” which lead Gloria to record her solo album, “Just For You.”

In the world of acting, many remember Gloria from the hit NBC series “ER,” a role that garnered her two EMMY nominations and a Golden Globe nomination. Since then, Gloria has had multiple regular starring roles in shows such as “Raising The Bar,” “Falling Skies,” and Marvel’s “Cloak & Dagger.” Gloria will be continuing her role in the upcoming season of “Mr. Robot,” as well as the new Showtime series, “City On A Hill,” starring Kevin Bacon. In film, Gloria portrayed Elizabeth Keckley alongside Danial Day-Lewis and Sally Field in Steven Spielberg’s “Lincoln;” appeared alongside Paul Rudd and Tina Fey in Paul Weitz’ “Admission;” and starred opposite Samuel L. Jackson in “Reasonable Doubt.” Gloria’s portrayal of Condoleezza Rice in David Hare’s play “Stuff Happens” at The Public Theater in New York City garnered her a Lucille Lortel Award for Outstanding Lead Actress.

Marty Ashby is a jazz guitarist, GRAMMY® Award-winning producer, programming consultant, motivational speaker and lifelong advocate of jazz music and its unique place in American culture. He is Executive Producer of MCG Jazz, which he started in 1987 and since then he has produced more than 2,000 concerts and over 50 recordings on the MCG Jazz label garnering five GRAMMY® Awards and 11 additional GRAMMY® nominations. For more than three decades, Ashby has been an artistic advisor and producer for jazz concerts and festivals around the country, including the Animal Crackers jazz series in Racine, WI, Jazz at Seven Springs Festival and Jazz on the Circle Series in Cleveland. He was the EPP Goldman-Sachs Fellow at the National Museum of American History at the Smithsonian and has worked with many Jazz organizations as a consultant. Ashby has presented his Jazz is Life® professional development workshop to corporate and community audiences nationally and internationally. As a guitarist, Ashby has performed and recorded with Slide Hampton, Claudio Roditi, Nancy Wilson, Paquito D’Rivera, Herbie Mann, Phil Woods, The Dizzy Gillespie™ All-Star Big Band and others. In addition to his musicianship, Ashby has curated and managed national and international tours for Jazz Across the Americas and the Smithsonian Jazz Masterworks Orchestra’s Tribute to Ella Fitzgerald and the Smithsonian Jazz Masterworks Orchestra’s Jazz Beyond Borders 2019 world tour.

Tour dates for Gloria Reuben and Marty Ashby can be found at: www.gloriareuben.com and www.martyashby.com.

TO PURCHASE:
For All We Know by Gloria Reuben & Marty Ashby Available on February 14, 2020.
Pre-Order your copy now from: http://mcgjazz.org or www.amazon.com