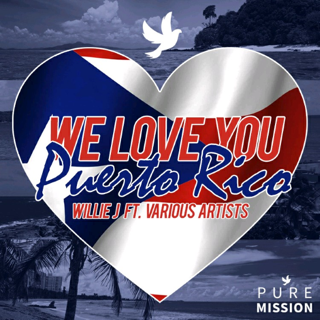 Nearly two years after Hurricane Maria devastated the U.S. territory of Puerto Rico and other surrounding islands, the news crews have long moved on but the humanitarian crises endure. The reality is sobering, with more officially reported deaths than 9/11, a tripling of attempted suicides and the closing of 283 schools just the start of the ongoing toll.

On January 8, 2020, Puerto Rico again has been declared another state of emergency after hundreds of earthquakes have hit the island with a 6.4 magnitude being the most destructive.Reports have said 300,000 clients are without power, many without water and people were forced to sleep in the streets.This is the largest earthquake catastrophe in 102 years.

Keenly aware of the depth of the tragedies and determined to let the citizens of Puerto Rico know folks on the mainland still have their backs, St. Louis based singer, songwriter, entertainer and producer Willie J has joined forces with Aaron Emig, his partner at Pure Mission Entertainment, to create and release the powerhouse anthem “We Love You Puerto Rico.”

Pure Mission Entertainment, whose founding philosophy is “Empowering People. Changing Lives. Creating Hope Through Arts and Entertainment,” currently released the official music video for “We Love You Puerto Rico” and partnered with the Puerto Rican Society (www.sprstlouis.com) to raise funds forstill struggling survivors of Maria and the earthquakes.

Key lines from the song convey an array of heartfelt, impactful and ultimately uplifting emotions: “We can feel your pain while you’re drowning in the rain,” “So hold your head up high up to the sky, though you wonder why it’s gone, be alright in the morning,” “When you can’t stand tall, just take my hand, together we can stand.” The infectious, singalong hook goes, “We love you, we love you Puerto Rico, hold on, We love you, we love you, just be strong, don’t you let go!”

The song’s initial inspiration came from the poignant, well-reported local St. Louis story of high school student Dante Sepulveda, a Maria survivor whose mother sent him from Puerto Rico to live with distant relatives in Collinsville, IL (outside of East St. Louis). “I was introduced to Dante by a member of our church,” Aaron Emig says.

“Long story short, he needed to graduate high school but the public school he had been attending since leaving Puerto Rico didn’t give him enough credits to graduate. The Bob Emig Foundation, which I founded in honor of my late father, paid for his tuition at the private Althoff Catholic High School, where he would earn enough to get his diploma. That day when I spoke to his mother Mabel, she said, ‘Thanks for taking care of my baby!’ At that moment, I replied, ‘We got your back, Puerto Rico.’ I called up Willie, told him the story and he took care of the rest.”

Willie J adds, “We had some meetings about it, and I and the Muzic Doctorz started writing and putting together all these great artists to musically convey, on a global scale, exactly what Aaron told Dante’s mom – that we’ve got their back and won’t let them down. I wanted an anthem-like ‘We are the World’ type feel to it and picked the best artists I know and work with to create solo spotlights that would seamlessly come together and create an undeniable chemistry that would help get our message across. We need to help more Dantes, and with this song and Pure Mission Entertainment, we have the right platform to do it. Coincidentally, I happened to lose three dear family members and a rock artist I knew during the time we were working on this song, which led me to connect even deeper with what we were saying. It was a beacon of light and hope for me as well.”

Willie J’s most recent singles success have been his hit single “Moving Up,” which climbed three global charts, two of which were spotlighted in the Top-20 DRT, peaking at #14; “Level Up,” which reached #7 on the DRT Independent chart; and “Sunshine with the Rain,” featuring Arthur “Flash” Johnson, that rose to #3 twice on the Euro Indie Top 200 chart. As with “We Love You Puerto Rico,” Willie J wrote “Sunshine with the Rain” in the hopes of empowering people and changing lives.”