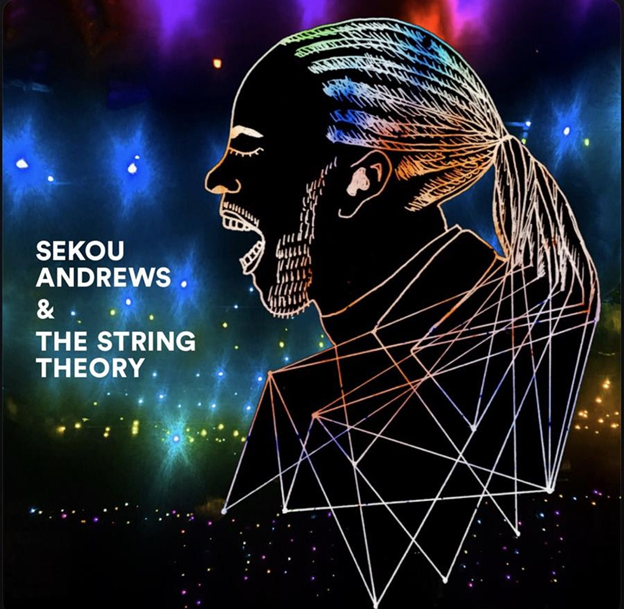 New Visual For 2nd Single “The Music Movement” Out Now

(LOS ANGELES) – For the first time in twelve (12) years a contemporary spoken word poet has received a GRAMMY® nomination in the “Best Spoken Word Album” category. That poet is SEKOU ANDREWS for his self-titled, avant-garde and very poetic 6-track offering, SEKOU ANDREWS & THE STRING THEORY. Maya Angelou was nominated in 2007 and prior to that won the award in 2002 for “A Song Flung Up To Heaven.”

“Receiving this recognition is beyond exciting and an incredible honor. I’ve dedicated my career to helping to pioneer a commercially viable industry for the art form I love. I hope having spoken word poetry back on the GRAMMY® map will open doors for future poets to be recognized,” said Sekou. “Plus, what better company for The String Theory and I to be in than to be nominated alongside Michelle Obama!” he added.

SEKOU ANDREWS & THE STRING THEORY, an album of poetry conceived and written by Andrews and paired with a neo-classical, symphony orchestra called The String Theory, comprised of more than 50 European and American musicians, has turned spoken word on its ear.

The album’s soulfully symphonic second single, “The Music Movement,” finds Sekou using riveting spoken word over a breathtakingly epic orchestral track to celebrate the power of music in our lives, affirming: “And we will know that our symphony is hotter than my single, when God hears us turn on and shouts ‘That’s my soooong!’” The new music video was shot with the orchestra across multiple locations in Berlin, including the murals along the Berlin wall to symbolize the power of art to break down barriers. Watch The Video Here.

It’s lead track, “Good Vibes,” which catapulted the nomination, delivers a beautiful, haunting musical bed for Sekou’s words that speak through your soul, affirming: “We’re composed of vibrations that ripple and collide/Our bodies are instruments that harness good vibes/Our cells keep our score, our music is alive…We Are Art!”

During his 17-year career as a full-time poet, Sekou has innovated a new category of public speaking he has coined “Poetic Voice.” This cutting-edge style of communication is disrupting the speaking industry by seamlessly fusing inspirational speaking with spoken word poetry and is electrifying audiences at the world’s largest organizations.

Legendary producer, Quincy Jones once stated about Sekou, “I’m starting to think there isn’t a crowd this young brother can’t bring on their feet.”

Sekou Andrews is one of the most successful spoken word poets world-wide. A former schoolteacher turned award-winning-recording-artist, and two-time National Poetry Slam Champion, on any given day you may find Sekou keynoting at a Fortune 500 company, inspiring thousands at a concert, or performing for Barack Obama in Oprah’s backyard. His poetic keynotes are in such high demand with leading brands like Google, Toyota, Nike, Paypal, Viacom, EA Games and Microsoft, that Forbes has named him “the de facto poet laureate of corporate America.” Sekou has shared the stage with music heavyweight, chart-toppers that include Stevie Wonder, Jay-Z, Maroon 5, Kendrick Lamar and more. His latest, genre-bending album of poetry paired with the String Theory, a neo-classical orchestra from Europe, has just made him the first contemporary spoken word poet to be nominated for a GRAMMY® in the “Best Spoken Word Album” category.