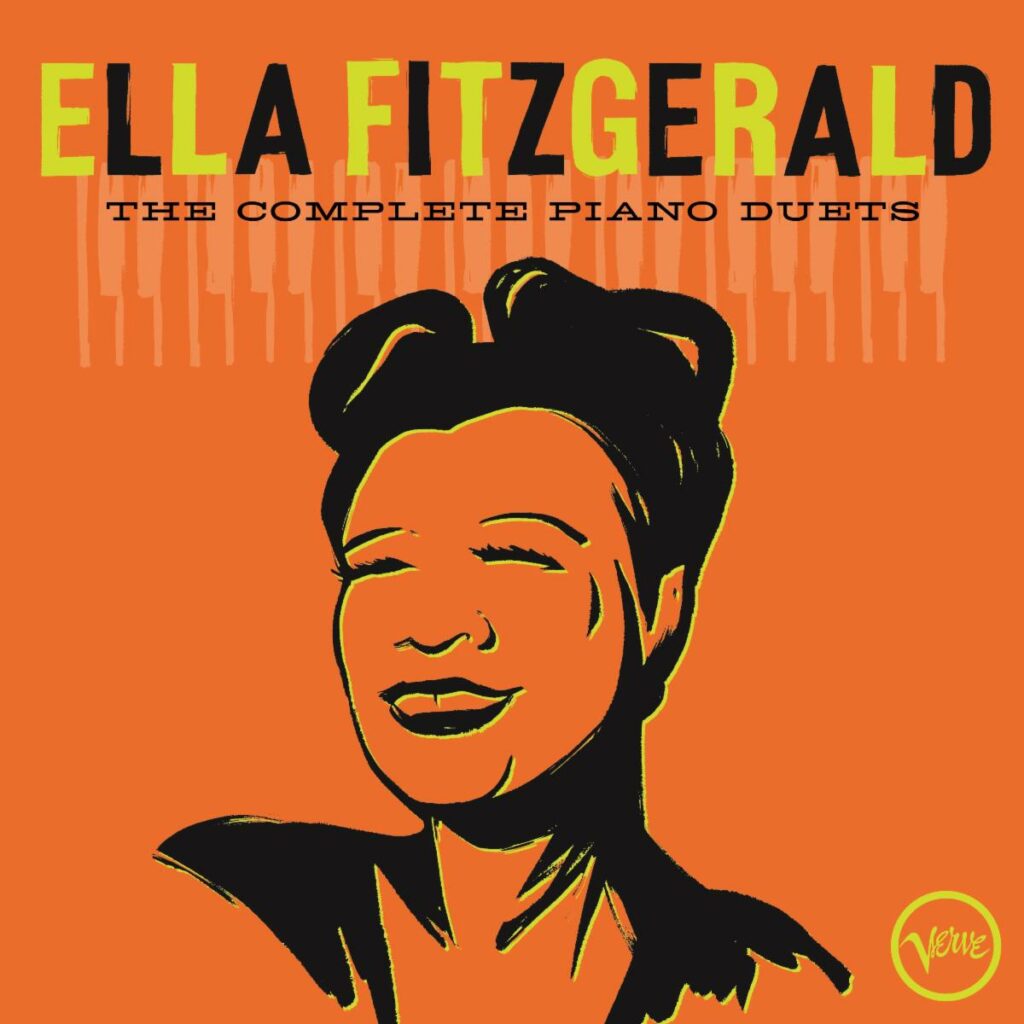 Album Collects Songs From Her Classic Song Book
Releases of Cole Porter and Duke Ellington as well as from
Ella Sings Gershwin, Songs In A Mellow Mood,
Ella Fitzgerald Sings Songs From Let No Man Write My Epitaph, and Pablo Records’ Ella and Oscar

Ella Fitzgerald was masterful in any musical format, but there was something especially luminous about her singing alone with a piano. This was clear when pianist Ellis Larkins was first asked to work with her for her 1950 album, Ella Sings Gershwin. “Larkins said he strongly believed that piano accompaniment alone would best serve the singer’s extraordinary talents,” NPR wrote in 2008. “She just loved singing with Ellis,” producer Milt Gabler said in 1990. The result was a delicacy of 1950s vocal jazz, revealing that Fitzgerald—a three-octave dynamo—was just as brilliant without any bells and whistles.

The Gershwin album did so well that Fitzgerald reunited with Larkins for a second voice-and-piano album in 1954, Songs In A Mellow Mood, which consisted of a variety of iconic Great American Songbook standards. Fitzgerald found massive success with her signature series of lush, orchestral Song Book releases, but throughout her long and illustrious career, she would occasionally return to the intimate format of just voice and piano. While she peppered 1956’s Ella Fitzgerald Sings The Cole Porter Song Book and 1957’s Ella Fitzgerald Sings The Duke Ellington Song Book with a couple piano duets, 1960’s Ella Fitzgerald Sings Songs From Let No Man Write My Epitaph, featuring songs from the film she appeared in as a pianist-singer, was her third full album accompanied only by piano, this time played by Paul Smith. In 1964, she performed a ravishing rendition of “Somewhere In The Night” with pianist Tommy Flanagan live at the French Riviera which was later issued on the 1964 live album, Ella at Juan-Les-Pins. Fitzgerald’s final major collaboration with a piano player was Ella and Oscar, a 1975 duet with the revered Oscar Peterson, who she had worked with on and off for more than two decades.

For the first time ever, all of Fitzgerald’s captivating collaborations with pianists on the labels Decca, Verve, and Pablo, have been collected together as The Complete Piano Duets, which will be released March 13 as a 2CD and digital collection via Verve Records/UMe. The double album includes detailed liner notes by noted author and music critic Will Friedwald. Pre-order The Complete Piano Duets now: https://UMe.lnk.to/CompletePianoDuets

The Complete Piano Duets sequences each track in the chronological order it was recorded in, forming a miniature crash course on Fitzgerald’s various eras. You can drop in on her early sessions with Larkins (“Someone To Watch Over Me,” “But Not For Me,” “I’ve Got a Crush On You,”) hear her and Paul Smith tackle Cole Porter (“Miss Otis Regrets”) and music from the gritty 1960 crime drama Let No Man Write My Epitaph (“Black Coffee,” “Angel Eyes,” “I Cried For You”), drop in on her and Tommy Flanagan at a 1964 French gig (“Somewhere In The Night”) and revisit inspired 1975 duets with Oscar Peterson from the third act of her career (“Mean to Me,” “How Long Has This Been Going On?,” “April In Paris”).

As Friedwald writes in the liner notes, “Fitzgerald was so great at everything–especially scatting and swinging–that it tended to overshadow her ballad singing. Yet, as any one of the 43 tracks on this collection makes clear, Ella Fitzgerald was a nonpareil singer of love songs, a balladeer par excellence. Like her closest colleagues, Louis Armstrong, Frank Sinatra, Nat King Cole, and Billie Holiday, Fitzgerald could get deep into not just the words but the inner meaning of a song and bring out the profound truths that the lyricist had in mind all along.”

Sometimes, as on Ella Fitzgerald Sings The Cole Porter Song Book and Ella Fitzgerald Sings The Duke Ellington Song Book, her sparer recordings were sandwiched between big band and orchestral work. Now, for the first time ever, all of Fitzgerald’s exquisite piano duets have been assembled on one program. Whether you’re a fan of vocal jazz, solo piano or American popular song in general, The Complete Piano Duets is a must-have document of a masterful interpreter—raw, intimate, vulnerable, and oftentimes at her very best.

ABOUT THE ELLA FITZGERALD CHARITABLE FOUNDATION