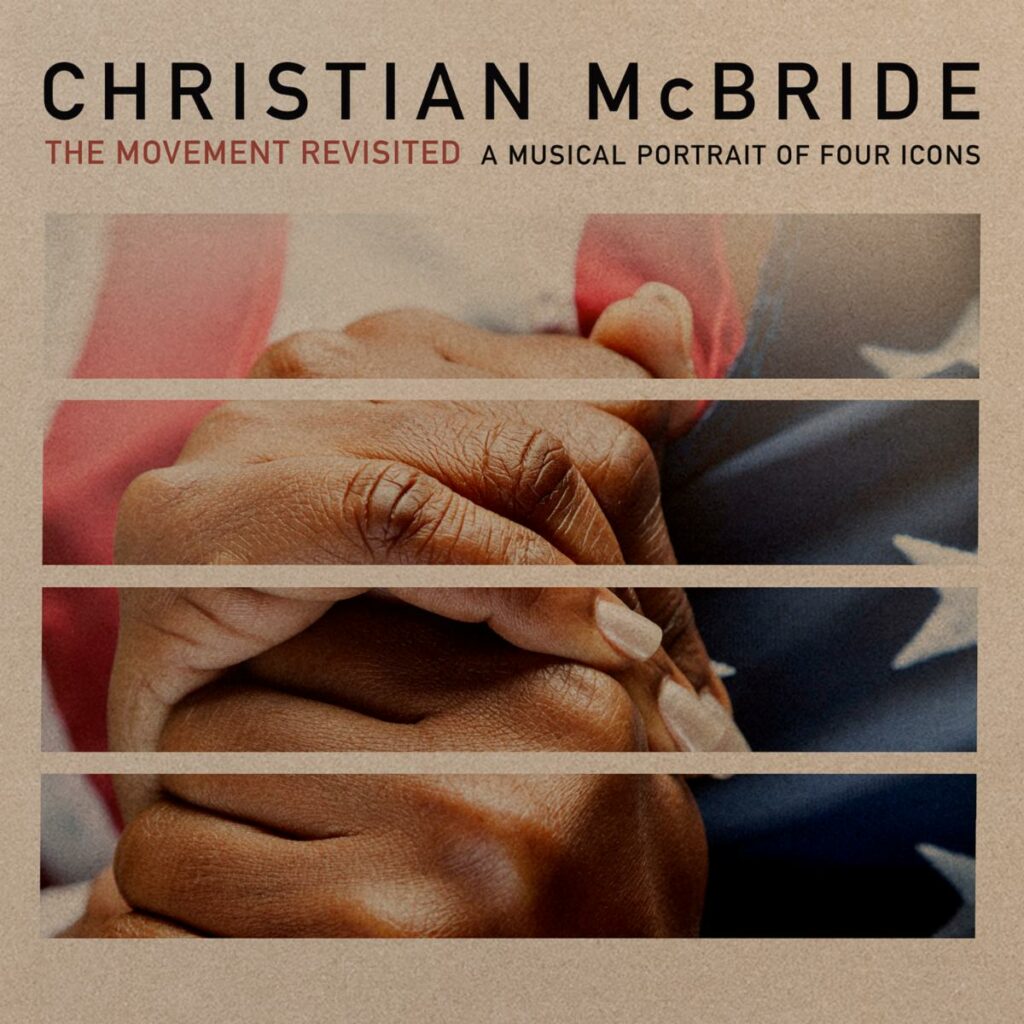 In the 1960s, when the Civil Rights Movement achieved its greatest moments, gifted bassist and composer Christian McBride was not yet born. As a child in the 1970s, he learned the history of the movement in school, but due to a quirk of fate – his grandmother’s fortunate propensity for saving old things – he found another source of information that spoke to him on a more emotionally accessible level than history books.

“When I was a kid, I used to spend hours looking at old copies of Ebony and Jet magazines that my grandmother saved,” he says. “To read contemporaneous writings by black writers about events and people who were my history – our history – that was absolutely fascinating to me. It was the greatest gift my grandmother could have given to me.”

That gift played a major role in the creation of The Movement Revisited: A Musical Portrait of Four Icons, McBride’s stunning masterpiece about “the struggle,” which is now a 20 year-long, continuously evolving project. The work combines elements of jazz, gospel, big band, swing, symphony, theater and dramatic spoken word, in a clear-eyed yet optimistic look at where our society has come from and where it is hopefully headed.

“What’s going on with our society right now is that we’re picking up the struggle
over civil rights – human rights, really – where we left off at an earlier time in our
culture, while also fighting some new battles. So, if ‘The Movement Revisited’
can propel awareness of not just today’s issues, but our history, while
pleasing people musically, then it has done its job.”

Born in Philadelphia, McBride was a gifted musical prodigy who soaked up influences from every direction. At the tender age of 17, he was recruited by saxophonist Bobby Watson to join his group, Horizon. During the 1990s, he proceeded to work with some of the biggest names in jazz, including Pat Metheny, Wynton Marsalis, Freddie Hubbard and Chick Corea as well as major pop and rock stars like Sting, Paul McCartney, James Brown and Celine Dion. His abilities were also coveted by the classical music world, including opera legends Kathleen Battle and Renee Fleming.

In 1998, a musical commission from the Portland (Maine) Arts Society set in motion what would eventually become a major part of his life’s work. The only stipulation for the commission was that it had to include a choir. “At that time, I called it a musical portrait of the Civil Rights Movement,” Christian says. “I thought about those times and decided that rather than try to write a history of the movement, I wanted to evoke its spirit and feeling.”

Written for just a quartet and gospel choir, that original version of The Movement Revisited gave only a hint of what the piece would eventually become. In 2008, the L.A. Philharmonic asked if he would like to remake it as a far bigger version for their upcoming season.

The Movement Revisited grew into a sweeping four-part suite for big jazz band, small jazz group, gospel choir and four narrators who convey the pain and pathos, euphoria, joy and ultimately hope of the struggle through the words and writings of four iconic figures, not only of the movement, but America: the Rev. Dr. Martin Luther King Jr., Rosa Parks, Malcolm X and Muhammad Ali.

“The movement was obviously much bigger than the four historic figures I included,” Christian notes. “But these four icons are people that touched me deeply, therefore I decided to put the tagline “A Musical Portrait of Four Icons” as opposed to calling it a portrait of the Civil Rights Movement.”

In 2008, the new version of The Movement Revisited premiered to universal acclaim in a celebrated performance at the Walt Disney Concert Hall. A few months later, Barack Obama was elected President and McBride was asked by the Detroit Jazz Festival to perform The Movement Revisited again, this time at Detroit’s famed Ebenezer Baptist Church. The Detroit Jazz Festival asked him to expand the suite to include President Obama, which led to the creation of a fifth and final section of the suite, “Apotheosis, November 4th, 2008,” in which the icons quote Obama’s victory speech.

When time came to record The Movement Revisited for the album release, McBride began the all-important casting of four narrators who needed to possess the empathy, humor and gravitas to bring the words of these civil rights legends to life, especially for a new, younger audience.

For the voice of Rosa Parks, he made what some may have thought an unexpected voice by casting a non-actor – Sonia Sanchez, the great poet, author and artist. “She’s so majestic,” says McBride. “Sonia is one of our greatest voices. She was part of the Black Arts Movement in the 1960s and early 70s.” To portray Rev. Dr. Martin Luther King Jr., he turned to the great character actor Wendell Pierce (The Wire, Treme), who possessed the stirring presence and ringing tones necessary for the role. Two other great actors, Vondie Curtis-Hall (Chicago Hope, Daredevil) and Dion Graham (Malcolm X, The Wire) were recruited by McBride to play Malcolm X and Muhammad Ali, respectively. Both do a remarkable job of channeling the passion, fury and in Ali’s case, his razor-sharp humor.

It might seem the divided times in which we find ourselves right now are crying out for the album release of a work such as The Movement Revisited, and for Christian McBride the evolution of the piece has come to fruition at just the right moment.

“If you look at history, there were a number of artists who dedicated their music to what was going on in terms of the struggle,” McBride says. “In many ways, there are some new battles we’re fighting, but I feel that these new battles fall under the umbrella of equality, fairness and human rights – and that’s an old battle.”