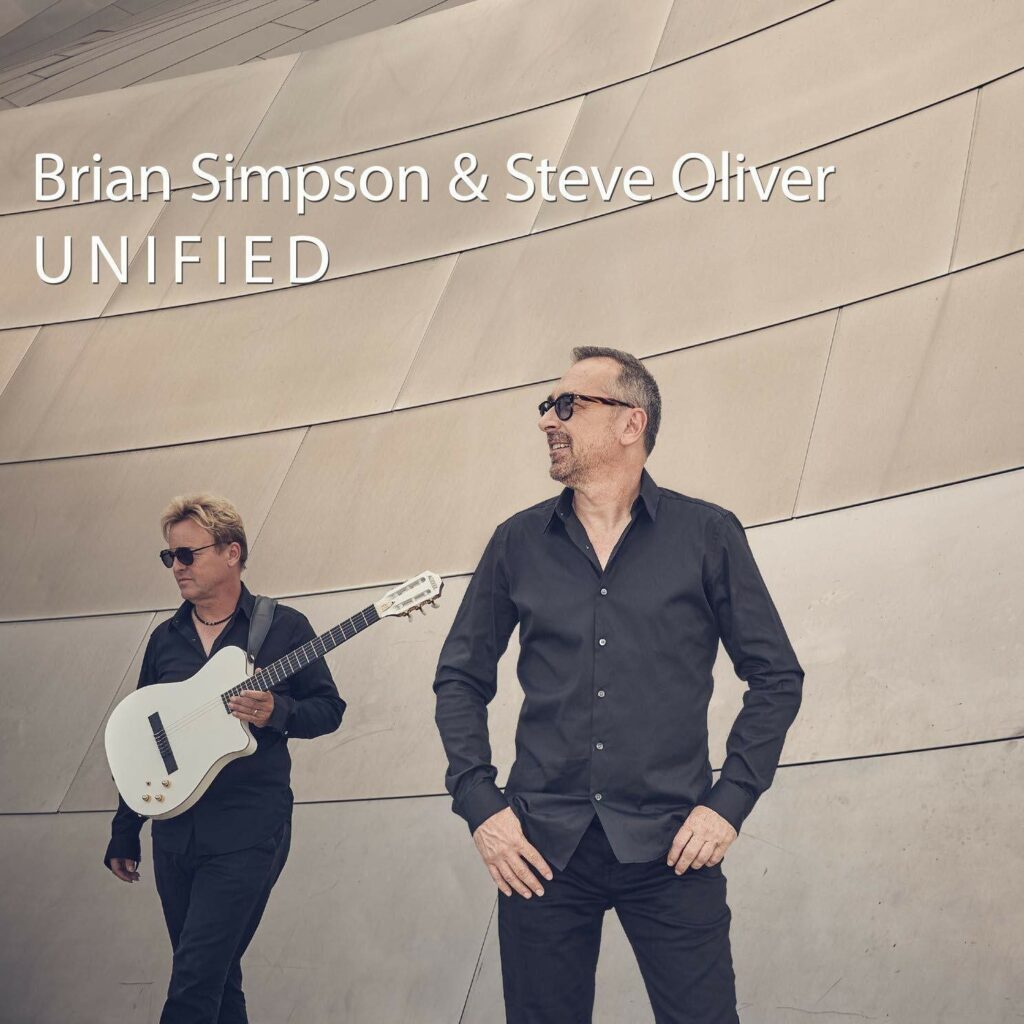 The Power of Music, Brotherhood and Sheer Joy Make For A Winning Combination On

“I’m an advocate of music healing and bringing people together,” says guitarist/vocalist, composer and producer Steve Oliver. “Let your mind wander along the path these songs take and perhaps you’ll have a brighter day, or connect with your deepest emotions,” adds pianist, composer and producer Brian Simpson. Unified, the anticipated new recording from Simpson and Oliver, showcases the chart-topping Contemporary Jazz pioneers’ good will in a captivating set of eleven moving originals. “I have worked with Brian on his last two solo albums and we have such a blast being creative in the studio. We laugh a lot!” The sheer joy that Oliver and Simpson share permeates every note on Unified and is evidenced in their joyous interplay, effervescent grooves and mind-bending soundscapes. Independently, the two have been churning out hits for over two decades. Simpson’s Midas touch has been called upon by everyone from Janet Jackson, Teena Marie and George Duke, to Stanley Clarke, Boney James and Dave Koz. Oliver’s winning approach has allowed him to collaborate with the likes of The Neville Brothers, Vinnie Colaiuta, Steve Reid, Larry Carlton, Rick Braun, Acoustic Alchemy and Gato Barbieri, to name a few.

On Unified, Brian Simpson and Steve Oliver enlist help from bassist Alex Al, drummer Eric Valentine and percussionist Ramon Yslas. The CD opens with the inviting, spicy and funky title track and album’s first single. Simpson and Oliver set the perfect mood to take you for a spin on the dance floor with a righteous combination of sophistication and soul. The exquisite “The Road Never Ends” travels a euphoric path with its shifting and pulsating rhythms, sailing melodies and harmonic twists. A few tracks on Unified lean towards Brian Simpson and Steve Oliver’s affinity for EDM. “Our original vision for the CD was more of an electronic music concept, but as it is evolved it moved more into a Contemporary Jazz project.” Two of the tracks that showcase this vibe are the hypnotic “What The Wind Knows,” and the ethereal “Last Summer.” “I am a big fan of electronic music and I like the combination of great rhythms and melodies with acoustic instruments and electronic sounds,” shares Oliver who is a fan of both Art of Noise and Dzihan & Kamien. Label-mate and trumpeter Rick Braun joins Simpson and Oliver on the bluesy swinger “Fired Up,” while the tender “Like No Other” will have you singing its sweet and ear-catching melody in no time.

Hailing from Gurnee, Illinois and based in Los Angeles, Brian Simpson always knew music would play center stage in his life. “Our house was filled with music. My older brother and sister both played instruments, and my brother’s rock band rehearsed in our living room every weekend,” shares the keyboardist whose father introduced him to jazz. Simpson’s breakthrough as a solo artist began in 2005 with the #1 radio hit “It’s All Good.” In 2007 Simpson released Above the Clouds, featuring the hits “What Cha Gonna Do?” and “Juicy.” After graduating from Northern Illinois University, Simpson relocated to Los Angeles where he quickly immersed himself in the local jazz scene, playing alongside everyone from saxophonists Everette Harp and Boney James to guitarist Norman Brown. Simpson would go on to tour the world with pop divas Teena Marie, Sheena Easton and Janet Jackson. In January, 1991 he co-wrote the #1 Pop hit “The First Time” by Surface, which conquered both the R&B and Adult Contemporary charts. Simpson who has been musical director for Dave Koz for close to 20 years has toured with some of the greats of recent jazz history, including George Duke, Stanley Clarke, Larry Carlton, George Howard, Billy Cobham, and Gerald Albright. In 2010 Simpson released South Beach whose title track snagged a #1 slot on the charts. Just What You Need followed in 2013 featuring the Antônio Carlos Jobim/ Vinicius de Moraes classic “The Girl From Ipanema” which hit #1 on the charts and “Emerald City,” a Top 3 hit. 2015’s Out Of A Dream featured the Top Ten single “Skywatcher.” 2016 saw the release of Persuasion which featured the Top 10 single “Wonderland” and Something About You in 2018 featuring the smash single “Morning Samba.”

At a time where human interaction is being replaced by screen time and people seem to be more focused on our differences rather than our commonalities, it is refreshing to experience something that speaks to the soul. Brian Simpson and Steve Oliver’s Unified is a refreshing journey to a happy place. Simpson concludes, “Music has the unparalleled ability make a profound difference in all of our lives.” Oliver adds, “I sure love this album even after writing it and listening to it a thousand times. I never tire of it and hope people will feel the same!!!”