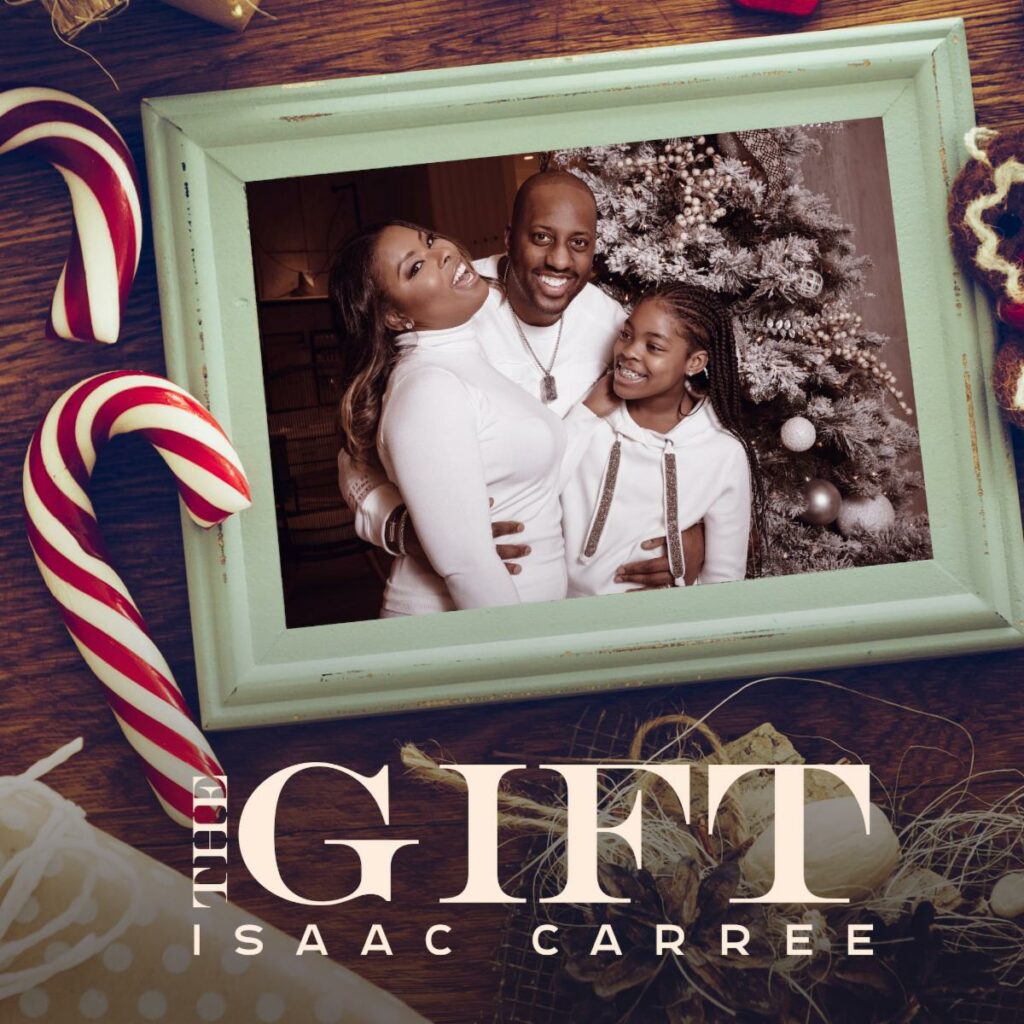 The Gifts Keep Coming in 2020 as Carree Releases First New CD In Six Years No Risk No Reward Feb. 14th

Single Available On All Digital Platforms on 12/13

“During this Christmas season I want to encourage everyone to be thankful, grateful, and show love to the ones you love! Life is but a vapor, so don’t waste time majoring in the minor things. I want this song to remind you that the greatest GIFT of all is God, and God is love! Merry Christmas from my family to yours!”
-Isaac Carree

“There’s no one like me because God only made one me and I’m comfortable doing me,” confesses award-winning singer, songwriter and producer Isaac Carree. “So I embrace whatever comes with that!” Carree has been converting listeners to believers ever since he launched his career over 25 years ago with his earnest and unique artistry that has landed him at #1 on Gospel Billboard Charts and Gospel radio multiple times. After taking a six-year pause from his solo recording career, Carree is back with his highly anticipated recording, No Risk No Reward, set for release February 14, 2020 on Shanachie Entertainment. Taking risks is something the Atlanta based Renaissance man is well acquainted with. His motto is “Why not?!” He explains, “I’m intentional about everything I do. Sometimes I do things even if I am afraid, but I do it! WHY NOT?!” It is this spirit that led the singer to step away from the recording scene to allow himself the opportunity to explore various creative avenues. “Allowing myself this time afforded me the opportunity to shift the trajectory of my mind and to reset to prepare for this moment now!,” shares Carree. “I had the life changing experience of touring with Diddy and the Bad Boy Reunion Tour. I also toured with Tim McGraw and Faith Hill on the Soul II Soul World Tour and had the time of my life. After being away from the industry and not having new music out for six years, it feels really good to be back and to partner with Shanachie who believes in my vision.” Carree also penned his first book Service: My Words. My Life. My Truth and launched his own music conference, The Plug, in Atlanta.

No Risk No Reward features the album’s first single “HER.” This stunning ballad is a powerful anthem from men to their woman. It is Isaac Carree’s tribute to his wife Dietra. “I love my wife,” says Carree. “She deserves NOTHING but the best! We’ve grown together, we’ve had our ups and our downs but she stuck with me by my side. She’s loyal, she’s a prayer warrior, she’s the mother of our child, so this song embodies how GRATEFUL to God I am for HER!” No Risk No Reward is Isaac Carree’s third solo recording and is produced by Dove Award-winner and two-time Grammy Award-winning producer Blac Elvis, who has produced hits for everyone from Beyoncé (“Ego”) to Fergie (“Glamorous”) Ciara (“Promise”), Usher (“Lil’ Freak) and Smokie Norful (“Nothing Is Impossible”).

Isaac Carree launched his career as a soloist with John P. Kee & New Life Community Choir and later on with his own award-winning Gospel quartet, Men of Standard. His soulful velvety tenor, heavenly runs, smooth production and ability infuse various genres into his irresistible sound, have allowed him to collaborate with everyone from Kirk Franklin and Mary Mary to Donnie McClurkin, Marvin Sapp and Israel Houghton, among others. The transcendent messages of Carree’s hits like “Trust In God,” “In Your Will” and “In The Middle,” demonstrates the power of God’s redemption and affirms his mission to inspire us to persevere and remember that it is never too late to start over.

No Risk No Reward follows 2013’s Reset, which debuted on the Billboard Gospel Chart at #1 and featured the hit singles “Clean This House” and “But God.” The album earned four BMI Awards and two Dove nominations. 2011’s Uncommon Me, Carree’s debut solo album, also debuted at #1 and garnered him the prestigious Stellar Award for Producer of the Year, along with four more nominations, including Contemporary Male Vocalist of the Year and New Artist of the Year. The single “In the Middle” hit #1 on Billboard’s Gospel chart and won ASCAP’s award of Song Of The Year in 2012.

Isaac Carree’s anticipated return on No Risk No Reward does not disappoint. The Atlanta based Carree shares, “Anyone who has followed my solo career knows that I like to take musical risks and push the envelope. This album is no different. Joining forces with producers Blac Elvis and Red Kulture has been inspiring! I wanted a different energy, a different sound, and a different vibration to this music. And we accomplished that! So stay tuned… I’m BACK!”