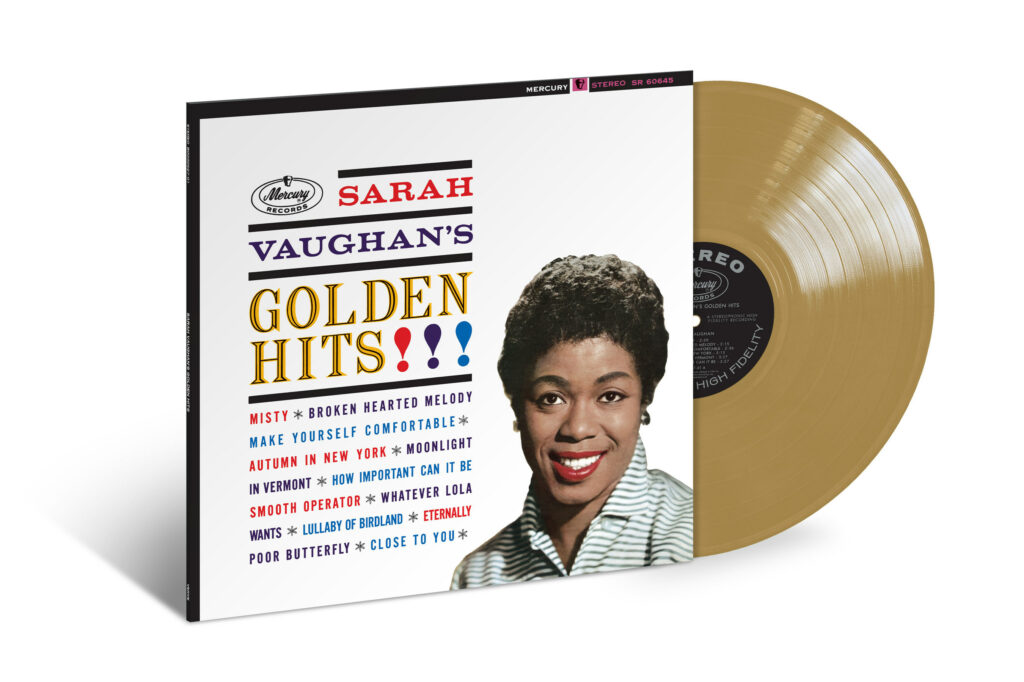 LOS ANGELES, Aug. 9, 2019 /PRNewswire/ — On August 30, Verve/UMe is set to release Sarah Vaughan‘s Golden Hits on vinyl in two different color options: black and gold. Remastered at Capitol Studios from the original analog tapes, this collection of an even-dozen of the legendary jazz vocalist’s greatest performances showcases the scope of her wide vocal range, bop-phrasing innovations, and expert yet effortless vibrato control. Upon the album’s original release in November 1961, a featured review in Billboard magazine proclaimed, “Mighty good listening here.” No doubt: both sides of Sarah Vaughan’s Golden Hits LP lend ample proof as to why Vaughan has been long acclaimed as one of the pre-eminent vocalists of all-time, right alongside the likes of Billie Holiday and Ella Fitzgerald, who once called Vaughan “the world’s greatest singing talent.” Preorder here: https://UMe.lnk.to/GoldenHits.

Vaughan, who passed away at age 66 in 1990, was a three-octave contralto equally adept at singing traditional jazz, contemporary pop, and classically arranged material with much verve, panache, and personal swagger, earning her the nickname “Sassy” in the process. Witness her operatic mastery of “Misty,” the appreciative drive of “Smooth Operator,” and the catchy swing of “Broken Hearted Melody,” the latter of which remained a fixture in Vaughan’s live repertoire for many years to come. Vaughan also saw success on multiple charts, having taken “Broken Hearted Melody” to No. 7 on the Billboard Singles chart and No. 5 on the R&B chart while “Smooth Operator” reached No. 8 on the R&B chart, all in 1959. More recently, the sly “ooh-ooh” come-on appeal of “Make Yourself Comfortable” is featured in a prominent global Lincoln Continental ad campaign starring Serena Williams.

In the 1930s, Vaughan began developing her vocal and piano-playing chops in a local church choir in Newark, New Jersey. Following that, she would soon frequent jazz clubs in Newark and New York City, ultimately leading to her securing featured vocalist stints in the 1940s with big-band jazz impresarios Earl Hines and Billy Eckstine before embarking on a solo career. Vaughan was also a nine-time GRAMMY® nominee, ultimately earning a Lifetime Achievement Award in 1989. In 1988, she was inducted into the American Jazz Hall of Fame, and in 1989, she was given the NEA Jazz Masters Award.

A vocalist for the ages, Sarah Vaughan’s indelibly seductive tone and wide-ranging influence extend well into the 21st Century. Sarah Vaughan’s Golden Hits is both the perfect entry point for neophyte listeners and a fine turntable refresher for longtime appreciators alike. Turn the lights down, make yourself comfortable, and enjoy the timeless charms of Sarah Vaughan, her golden throat, and her Golden Hits.