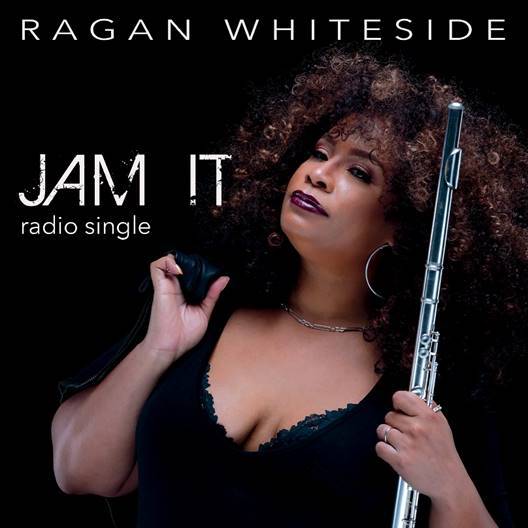 ATLANTA (5 August 2019): The sizzling summer heat. A backyard barbecue filled with food, family and friends. A tune comes on the radio that instantly sets bodies in motion. As people start moving and grooving, someone exclaims, “That’s my jam!” This scene is what soul-jazz flutist Ragan Whiteside envisioned when creating her latest single, “Jam It.” The hot track became her fourth consecutive Billboard Top 10 single when it hit the ninth spot on the chart for the week of August 3. At No. 9 with a bullet, it’s still rising like the mercury.

“Your favorite party song comes on the radio and someone claims it as their jam. I wanted ‘Jam It’ to give you that feeling and get people dancing – whether you’re at a backyard barbecue or just driving to work. Wherever you’re listening, you should turn up your speakers and JAM IT!” said the Atlanta-based Whiteside.

Whiteside’s hit streak began when her 2017 “Treblemaker” album sent all three singles into the Billboard Top 10. Another collaboration with Baldwin, “Early Arrival” featuring saxophonist Kim Waters, got things started when it checked in at No. 7. She scored her first Billboard No. 1 hit with “Corey’s Bop,” a clubby trek she wrote with Johnson and Baldwin. Her own boisterous party starter, “See You at the Get Down” celebrated at No. 5.

Whiteside’s vibrant and velvety flute leaping amidst jazzy rhythms and funky beats is ushering her instrument back into the centerstage spotlight. She takes pride in being a completely independent artist who is flourishing while releasing her own recordings. A classically trained flautist and vocalist who grew up in Mount Vernon, New York, Whiteside took up the flute after first learning piano, violin and drums as a child. While studying classical music, she discovered her passion for songwriting and arranging. When Whiteside first became a jazz, funk and R&B mixologist, she won the Capital Jazz New Artist competition. She began collaborating with Baldwin and Johnson for her debut disc, “Class Axe” (2007), pouring splashes of classical into intoxicating jazz, funk and R&B cocktails. Whiteside incorporated fusion into the branded brew on subsequent sets: 2012’s “Evolve,” 2014’s “Quantum Drive” and “Treblemaker.” Among her honors, Whiteside was named Flutist of the Year at the Black Women in Jazz & Fine Arts Awards.

Either on her recordings or as a guest artist, Whiteside has flanked urban/contemporary jazz cohorts Earl Klugh, Kirk Whalum, Rick Braun, Marion Meadows, Walter Beasley, Patrice Rushen, Chieli Minucci, Frank McComb, Eric Darius, Baldwin and Waters. Her spirited stage performances have made her a popular draw at festivals and cruises such as the Seabreeze Jazz Festival, Mallorca Smooth Jazz Festival and the Capital Jazz SuperCruise. Catch Whiteside in the coming weeks at the Derby City Jazz Festival in Louisville, KY on August 10; Fourth Avenue Jazz Festival in Birmingham, AL on August 24; and at the Gulf Coast Jazz Summer Fest in Pensacola, FL on September 1. For more information, please visit http://www.raganwhiteside.com.