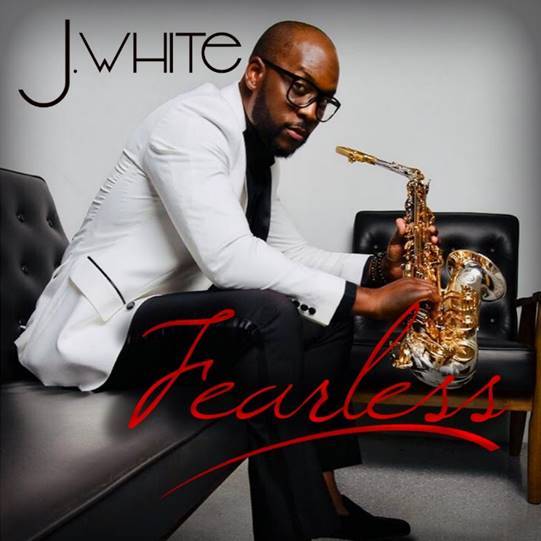 He successfully entered the Billboard Top 20 for the first time with the debut single from the upcoming EP, dropping September 13.

PHOENIX (20 August 2019): Every artist ever to hit the Billboard chart has stories of struggle, heartbreak, challenges, frustration, doubt and thoughts of giving up on a career as a recording artist. Soul-jazz saxophonist JWhite, a newcomer to the Billboard Top 20 with the summer single, “Driven,” is no different. After some reflection, he decided to pursue his dreams fearlessly, inspiring the title to his third collection, “Fearless,” which drops September 13.

“I have overcome so many obstacles and setbacks. I’ve thought about giving up many times. I’ve come across many other artists who have the same challenges and discouraging moments. However, I decided that I was going to ignore it all and choose to be fearless in my pursuit. No excuses. No public complaining. Just play hard, play with passion every single time and let God do the rest,” said JWhite, a Detroit native who resides in Phoenix.

JWhite had a hand in writing and producing all eight songs that comprise the “Fearless” EP. He previewed the forthcoming set with “Driven,” a midtempo urban contemporary groove that he wrote and produced with drummer Jeff Canady on which the hornman plays his alto sax fervently.

“I named it ‘Driven’ because I felt the groove had a pulse to it. The way I approached the melody is how I approach my goals as an artist. I approach them with purpose, soul and determination.”

A seasoned core of hitmakers teamed with JWhite to create the EP. Drummer Eric Valentine and bassist Nathaniel Kearney form a deep-pocketed rhythm section on the opening cut, “Valley of the Sun,” which bodes to be the second single. Keyboardist Gail Jhonson pours the soul of her Philly roots into the three tunes she cowrote and coproduced for the set – “Mr. NuGroove,” “Morning Rain” and “90’s Kinda Love” – the last of which features supple basslines from chart-topper Darryl Williams. Guitarist Matt Godina was JWhite’s cowriter and coproducer on “Soiree.” “Just Ride” is the only solo trek on the disc.

“I wrote ‘Just Ride’ on my own. It’s a chord progression I came up with a couple of years ago that I finally put a melody to. I was fortunate enough to have Nick Colionne play guitar on the song. Also, Nathan Mitchell pitched in on production to really bring the tune home.”

On the self-assured title track, JWhite combined forces with David P. Stevens. “I met David in San Diego at the Mediterranean Jazz & Supper Club on a joint show I did with Gail Jhonson. David is an awesome musician and has a new style of producing that is groundbreaking in the world of jazz. It was an honor to collaborate with him on this project,” said JWhite, who returns to the club Sunday (August 25) to headline a concert.

JWhite debuted as a solo artist with the 2012 album “New Jazz Swagger: Reloaded.” His saxplay is a swirl of modern jazz with straight-ahead jazz references, emoting rich melodies and lush harmonic passes atop sensual R&B tracks. Competing at the Warren Hill Sax Summit in 2013 helped him win slots to perform at the San Diego Jazz Festival, Las Vegas Jazz Festival, Arizona Jazz Festival and Jazz at the Creek. He’s also played club dates from coast to coast. In 2015, JWhite dropped the “Grit and Glamour” EP, an outing that strayed from his jazz base. “Fearless” is a purposeful return to his muse.