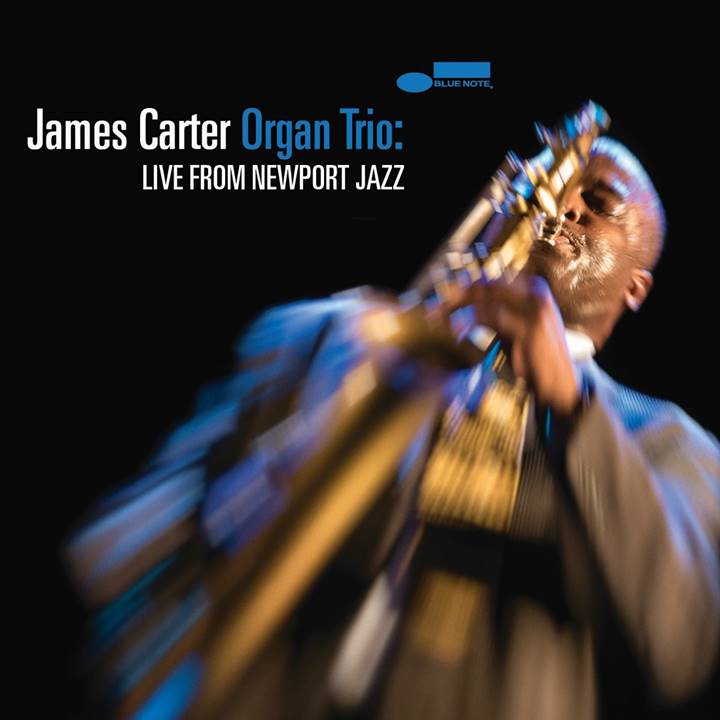 “To hear saxophonist James Carter is to be blown away,” stated the Washington Post, hitting the nail on the head. From moonlit ballads to funky workouts to the most cerebral kind of post-bop, in an intimate club or on a sprawling festival stage, the Detroit-born saxophonist can seem to deliver all of jazz history in a single set.

“One of the most charismatic and powerful soloists in jazz,” per the New York Times, Carter harbors a command of his instruments that is astonishingly complete, though he only employs that technique in the service of canny ideas. Even when he appears on the verge of shattering his horn, overblowing rapid-fire lines to otherworldly effect, he’s evoking early jazz, jump blues, the avant-garde and other lessons residing inside his vast, scholarly knowledge of the music of the African-American experience.

Which is all to say that Carter is a natural fit for Blue Note. His label debut is also his first new release since 2011, a soulfully robust dispatch from America’s most storied jazz festival that is a follow-up of sorts to Chasin’ the Gypsy, an Atlantic release from 2000 that The New Yorker called “an alternately reverent and audacious tribute to the Belgian swing-guitar legend Django Reinhardt. It may be the rambunctious saxophone player’s recorded masterpiece.”

Although Carter has been among the most celebrated jazz figures of his generation, recording for major labels, headlining landmark venues and topping polls in DownBeat, he sounds humbled by his relationship with jazz’s most iconic brand. “Oh man,” he begins. “As the label puts it, ‘The Finest in Jazz Since 1939.’ There’s history, legacy and longevity that goes with this label, and to be part of that in some fashion or form is a privilege and an honor.”

Blue Note President Don Was, a fellow Detroiter, has followed the saxophonist’s career for decades now, since the time Carter was “a local guy who was blowing people’s minds” on the Motor City scene. He recruited Carter to take part in Detroit Jazz City, a benefit compilation released by Blue Note in 2015 featuring a mix of classic cuts and contemporary offerings. There, Carter’s fiery performance is, no surprise, utterly of a piece with hard-swinging tracks by Kenny Cox, Joe Henderson, Marcus Belgrave, Elvin Jones, Donald Byrd and other Detroit-rooted Blue Note greats, some of whom mentored the saxophonist. “He does seem like a natural for the label,” Was agrees, “and this trio is a timeless Blue Note sound.” The format fits Carter’s own gritty, R&B-soaked sensibility like a glove, too. Or, as The New Yorker wrote, “The wail of a Hammond organ and a swinging force field of drums is just the backing for Carter’s storming saxophone playing.”

“It’s compact and soulful,” Carter says matter-of-factly, explaining why he digs an organ trio’s chemistry so deeply. From jazz radio to neighborhood cookouts, growing up in Detroit meant plenty of Blue Note B-3 grooves, he reflects. “[That sound was] always in the background,” Carter says. “You’d hear Jimmy Smith while somebody’s passing the baked beans and the ribs and all that other good stuff. The organ has always been a part of the African-American Diaspora,” he continues, “coming up through the spirituals and on into soul, neo-soul. It’s always been an integral part of the soulful landscape.”

Joining Carter on Live From Newport Jazz are two more gifted Detroit sons: Hammond B-3 virtuoso Gerard Gibbs, a protégé of Richard “Groove” Holmes whose playing has internalized the stylistic underpinnings of all the heaviest organ voices; and Alexander White, a wildly versatile young drummer, equally adept at old-school shuffles and breakbeats and odd time, who “brings new breath, new life into our playing, a different youthful fire,” Carter says.

Live From Newport Jazz’s unlikely repertoire comes from a jazz tradition that was, not unlike the organ trios jamming in Detroit’s corner bars, historically a music of the people. The program includes six tour de force takes on compositions written by or associated with Django Reinhardt. Carter first heard the Gypsy-jazz architect in 1983, on radio veteran Jim Gallert’s Jazz Yesterday on WDET, a program that kindled discoveries the saxophonist continues to explore. “[Gypsy jazz] has a certain delicacy to it,” he explains, “but at the same time it’s still intense.”

Newport Jazz is an exercise in musical transformation, a willful attempt to “give Gypsy jazz a hood pass,” Carter says, cracking up, “or urbanize it, if you will.” Carter and company filter these romantic, Roma-tinged lines through their Detroit filter so intensely that you might scratch your head as to why Blue Note would print the titles to classic soul-jazz tunes in French. “It’s a wild twist,” Was says. “But it’s not like it gets bogged down in concept. It stands on its own as this great groovin’ music.”