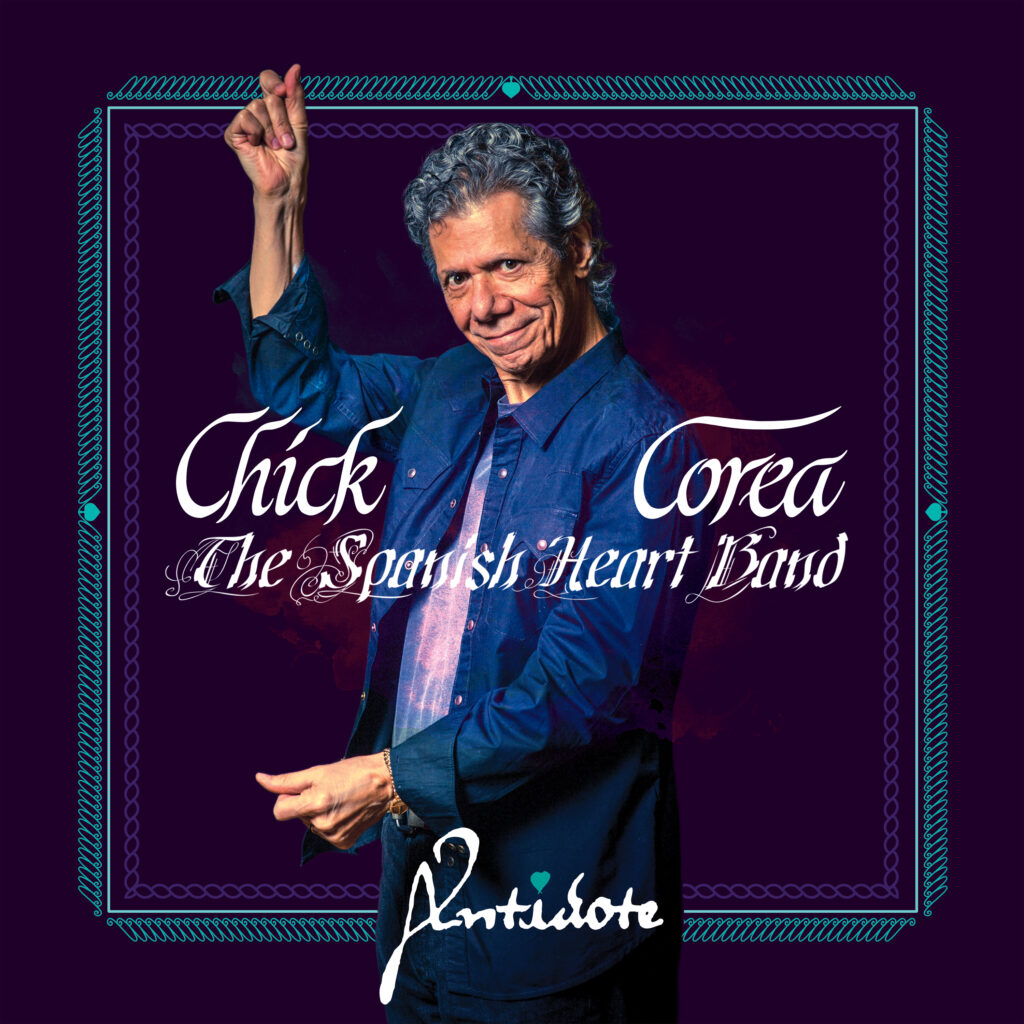 Throughout his storied career, iconic pianist/keyboardist Chick Corea has explored a wealth of music from across borders both geographical and stylistic. Time and again over the decades he’s returned to what he calls his “Spanish Heart” – the Spanish, Latin and flamenco traditions that have indelibly shaped his unmistakable sound. Now, with his new album Antidote, recorded with his brand-new Spanish Heart Band, Corea once again delves deeply into the Latin side of his musical heritage with a stunning collection of musicians from Spain, Cuba, Venezuela and the U.S.

Corea’s debut release with the Spanish Heart Band revisits classic pieces from two of the bandleader’s most beloved albums, My Spanish Heart and Touchstone, along with new compositions and favorites by revered composers like Antônio Carlos Jobim, Paco de Lucía and Igor Stravinsky. WBGO.org has the track premiere for “The Yellow Nimbus – Part 2” here.

Due out June 28, 2019 from Concord Jazz, Antidote is just that – a musical cure for a turbulent time, bringing together artists from diverse cultures to make harmonious music together. In addition to this stellar new ensemble, the recording features guest appearances by the acclaimed Panamanian vocalist Rubén Blades and gifted singers Gayle Moran Corea and Maria Bianca.

“My genetics are Italian,” Corea says, “but my heart is Spanish. I grew up with that music. This new band is a mix of all the wonderful and various aspects of my love and lifetime experience with these rhythms that have been such a big part of my musical heritage.”

To embark on this vibrant exploration, the 77-year-old keyboard virtuoso has assembled a brilliant eight-piece band: Flamenco guitarist Niño Josele and saxophonist/flutist Jorge Pardo both hail from Spain and have both worked with the late flamenco master Paco de Lucía. Bassist Carlitos Del Puerto was born in Havana, Cuba and played on Chinese Butterfly, Corea’s 2017 collaboration with legendary drummer Steve Gadd – as did Venezuelan percussionist Luisito Quintero.

Trumpeter Michael Rodriguez and trombonist Steve Davis form an unstoppable horn front line, while Marcus Gilmore follows in the footsteps of his grandfather, the great Roy Haynes, as a master drummer (and close collaborator with Corea). The band is augmented by the fiery footwork of rising star flamenco dancer Nino de los Reyes.

“Continuing along the lines of his landmark recordings, Touchstone and My Spanish Heart,” says John Burk, Concord Records President, “Chick applies his creative genius to further explorations of Spanish and Afro-Cuban styles with an exceptional cast of musicians, to produce some of the most thrilling, dynamic, and deeply musical work of his entire career.”

With a band of incredibly versatile musicians and his usual wide horizons, Corea composed a set of music that draws from a wealth of sources – jazz and Latin music, naturally, but also classical, funk and fusion elements. “This is the mixer,” he says, pointing to his head. “I drink in the culture around me, which is rich in ideas. I’m excited about this record because there are a lot of influences that come through in it.”

There has been a Latin tinge to Corea’s music almost as long as he’s been performing. His first gig upon arriving in New York City in 1960 was with the influential Cuban-born percussionist Mongo Santamaría at Birdland. As he recalls, “Four doors up from Birdland on Broadway was the Palladium, where you could hear people like Tito Puente, Machito, Ray Barretto, Eddie Palmieri. I used to jump out of my gig [during breaks] and go stand in front of the bandstand at the Palladium. So the jazz scene that I came up in was very much a part of what I call my ‘Spanish Heart.’”

Corea has made no secret for his love of Spanish, Latin and flamenco music. In 1972 he debuted perhaps his most well-known composition, “Spain,” inspired by Joaquin Rodrigo’s Concierto de Aranjuez. The piece has been recorded countless times since, including versions by de Lucía and Tito Puente. In 1976 he released My Spanish Heart, an innovative session combining jazz fusion with traditional Latin music; it went on to become one of Corea’s most successful albums and is universally considered a classic. 16 years later, he visited similar terrain on the even more expansive Touchstone, which spotlights his collaboration with de Lucía.

The dance of life

Freedom of the imagination

The joy of creating

From my Spanish Heart

Chick Corea on the web: